Ultimecia, the “Governess of Time” is arriving on 11/27 at 6PM PT (11/28 2AM UTC)! Heralded as THE meta character of early CHAOS, Ultimecia is a powerhouse DPS that brings 100% AOE Damage, Turn Kompression, Gravity, and strong debuffs to the table. Many in GL have been hoarding their gems waiting for this moment. However, if you don’t plan to pull for her, hopefully this guide can help you clear her CHAOS level. More after the break!

The ability names are translated from Japanese. As such, they may change upon global release.

The first part of this fight to be wary of is wave 3’s two Catoblepas. One of them will do “Evil Eye” which causes Petrify on it’s first turn, usually the one who acts last. You can avoid this by using Warrior of Light’s Throw Buckler on it, and hoping Elude makes it miss. The turn count is tight and a single petrify could ruin your run. Try to avoid it at all costs!

Wave 5 summons two Affect, a flying vampire mermaid with a nasty buff that gives 75% BRV damage reduction.  Affect will use the first Aqua Power after either one hits the 80% HP threshold and does the aura buff Reaper Rise, increasing all stats. Aqua Power will dispel all non framed debuffs, regen a huge amount of BRV (28-35k), and grant itself 75% BRV damage reduction. You will need a way to deal with this. Options include summoning and shaving, bringing in a friend unit with Gravity (reducing BRV by a set percentage), or running your own unit with gravity. Gravity options include Sherlotta’s EX, Ultimecia’s S2, and Bartz’s S2. Another option is a Lann&Reynn friend, as their EX ability will instantly break both targets. Once broken, the BRV damage reduction will no longer be in effect.

If you do not break the boss after it uses Aqua Power, it will do Demonsplash, a BRV regen and BRV + HP attack, most likely killing one character. This can also happen if it unbreaks on it’s own. Otherwise, following Aqua Power it will do Break. Break will inflict a framed Petrify for two turns.  For this reason, Warrior of Light was very popular for this fight, as his elude buff and taunt allows him to hopefully dodge the debuff.

After the 50% threshold, they gain the aura Reaper Rise+ and will do another, stronger Aqua Power. Then, when they are in red HP, they will do a third Aqua Power immedaitely after using Banishing Gaze, without using another turn.  Most teams summoned shortly after the second Aqua Power and burned them both down as fast as possible to avoid the third (and most devastating) one. 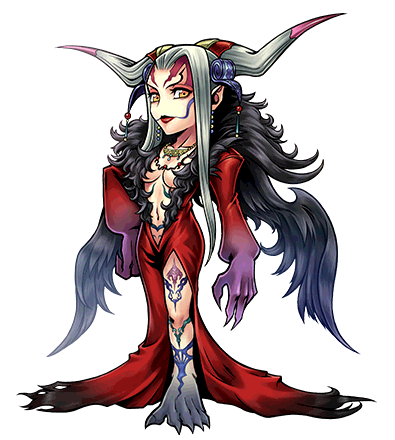 The most used characters in inkwelder’s Early CHAOS clears spreadsheet were:

Check out the link for the full list of team compositions, video links to clears, etc. It’s an amazing resource!

Ultimecia is finally here and her event is very challenging. I wish you all the best of luck, and don’t be afraid to try something new! You never know what you might figure out!