Hey everyone, tas here! It’s been a long time since I’ve written anything, but the mood struck me and here we are! You might have known me as keldegar from Vainglory, but alas, I no longer play that game. Today I’m here to talk about a huge datamine dump from none other than Rem at DissidiaDB, and we’ll go into detail on some of the new event formats. It will be SPOILER heavy, so definitely do not read this article if you like to be surprised!

Datamined information is not 100% confirmed. SquareEnix may choose to not release content, but it is very likely the following information will happen.

Dimension’s End Pathos was originally released as “Far Ends of the Dimension” (FEoD) Beta in Japan. It consists of two EX, two COSMOS, and three CHAOS difficulty stages. It is heretic style with no synergy, meaning once a character is used, they cannot be used again. In Japan, the event ran for one month. All requirements must be met to PERFECT the stage. Unlike previous heretics and abyss, no friend unit can be used. Stages can be reset, but must be completed again in order to continue to the next stages.

The rewards for the COSMOS will likely be pages which can be refined into books to realize EX+ weapons. The rewards for CHAOS were 40 nuggets per stage. That’s TWO whole ingots or a total of SIX!!!

Dimension’s End Order was originally released as “Far Ends of the Dimension” (FEoD) COSMOS in Japan. It consists of five COSMOS level stages. This one was permanent and heretic style with no synergy. The rewards for this one were two EX tokens per stage, for a total of ten EX tokens (or enough to purchase a free EX weapon!). When this debuted, they also added a new permanent EX shop. It included additional weapons, labeled in red in this graphic (previously available weapons in blue can also be purchased). 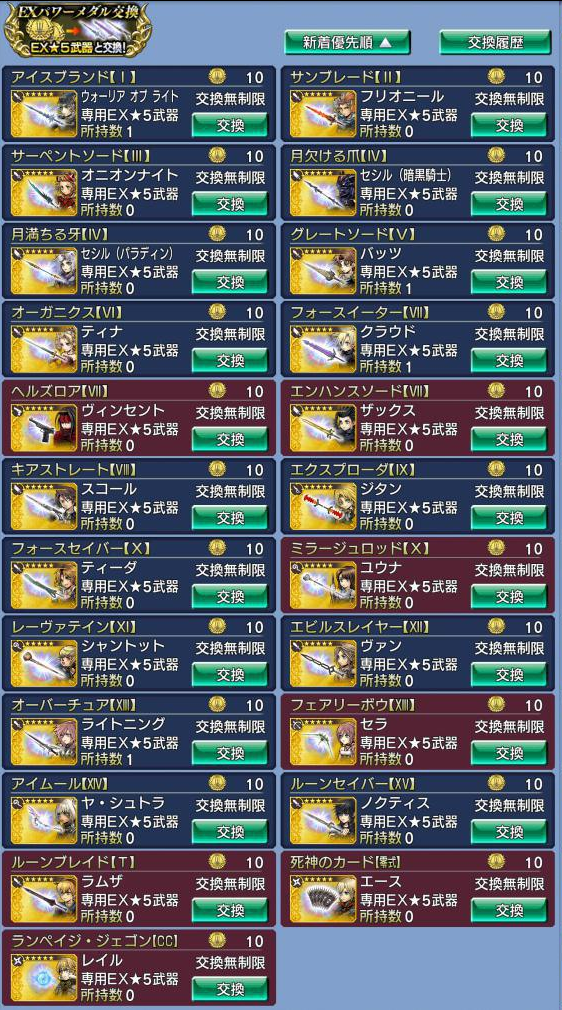 Dimension’s End Chaos was originally released as “Far Ends of the Dimension” (FEoD) [notice a trend here?] CHAOS in Japan. These are monthly releases of CHAOS heretic style permanent content. Initially released with five stages, with nugget rewards for perfecting them. If you perfect all five stages, that would be ten total ingots! However, that would mean having 15 CHAOS level units. This is why roster diversity is so often stressed, and will be a huge challenge for even the most veteran of players. This is the end-game.

Lastly, as a quick side note, each Dimension’s End event is separate. So, you can reuse characters that you used in Order, in Chaos.

Phew! that’s a LOT of upcoming content! I will try to go more in depth on upcoming events as they get closer, but for now I just wanted to give a quick overview of the AVALANCHE of content that’s coming. I hope you enjoyed the article, and see you next time!

Thanks and credits to: inkwelder and the Tonberry Troupe, Rem (DissidiaDB), Black Nero (YouTube), and the DFFOO Crystal Chronicles Podcast Discord.