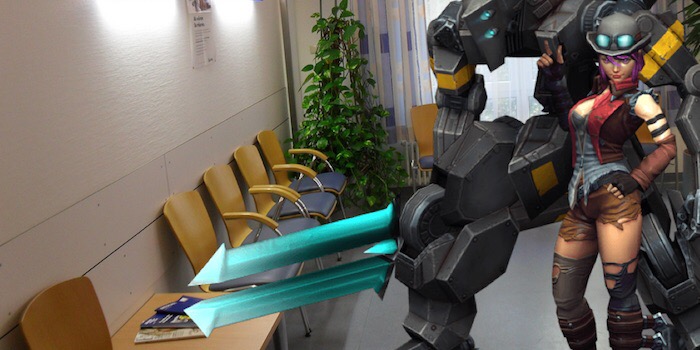 Joule paces the waiting room. Signs on the wall advertise cheap brake pads and color-stay paint sealants. A styrofoam cup of bland coffee sits untouched on the table next to some automotive and gun magazines. A mechanic comes out of the back room, wiping grease from his hands with an old rag. His face is grim as he approaches Joule.

Mechanic– I’m sorry, I thought you two were…

Mechanic– Mechs, right? What are they even thinking?

Mechanic– What were we talking about?

Joule– Is he okay?

Mechanic– Right. As you may already know, 8002 sustained severe damage to many critical gears, wires and thingamabobs.

Mechanic– He’s stable, but I need you to understand how serious this is. Please sit down.

Joule– No thanks, these chairs are terrible.

Mechanic– I don’t blame you, the plastic is so cheap.

Joule– Why do all waiting rooms have these chairs?

Mechanic– I know! It’s like, is there a factory somewhere that just makes crappy waiting room chairs?

They laugh again, this time harder.

Joule– We keep getting off track!

Mechanic– I know it’s like the impending bad news is making us overcompensate!

Mechanic– Me too. That’s the gas leak.

Joule– Tell it to me straight.

Mechanic– We managed to salvage most of his doo dads and thingies, but while he was under for repairs it became obvious that his Big Red Button was too far gone.

Joule– No! That’s the only thing that keeps us viable.

Mechanic– Hold on, Ms. Joule. He will still fire a giant laser, it’s just the button itself was destroyed and we had to act fast to save the trigger mechanism. We didn’t have any red buttons on hand and so I had to make a judgement call. Brace yourself. The new button, it’s burnt sienna.

Joule (Sits down on the crappy chair)- Oh. Isn’t that…

Mechanic– Yes, the only color kids don’t want to use in the crayon box.

Joule– Will he even recognize me?

Mechanic– It’s too soon to tell.

Joule– How am I supposed to take him anywhere like that? And Thanksgiving with my judgemental aunt? That’s out the window.

Mechanic– Maybe you can put a bag over his button, people might not notice.

Joule– When can I see him?

Mechanic– He’s still charging. We only had a phone plug so it could take a while but I’ll let you know as soon as he’s up.

Mechanic– Ms. Joule, I do have some good news.

A bearded man in a white nurse’s dress enters

Mechanic– While we were working, we noticed something just under his lower abdominal plating.

Joule pulls back the blanket to reveal a small toaster.

Mechanic– We think it’s a boy.

Mechanic– We’ll leave you two to get acquainted. There’s an outlet next to the coffee maker and some rye bread in the break room.

Joule– Thank you, thank you both so much.