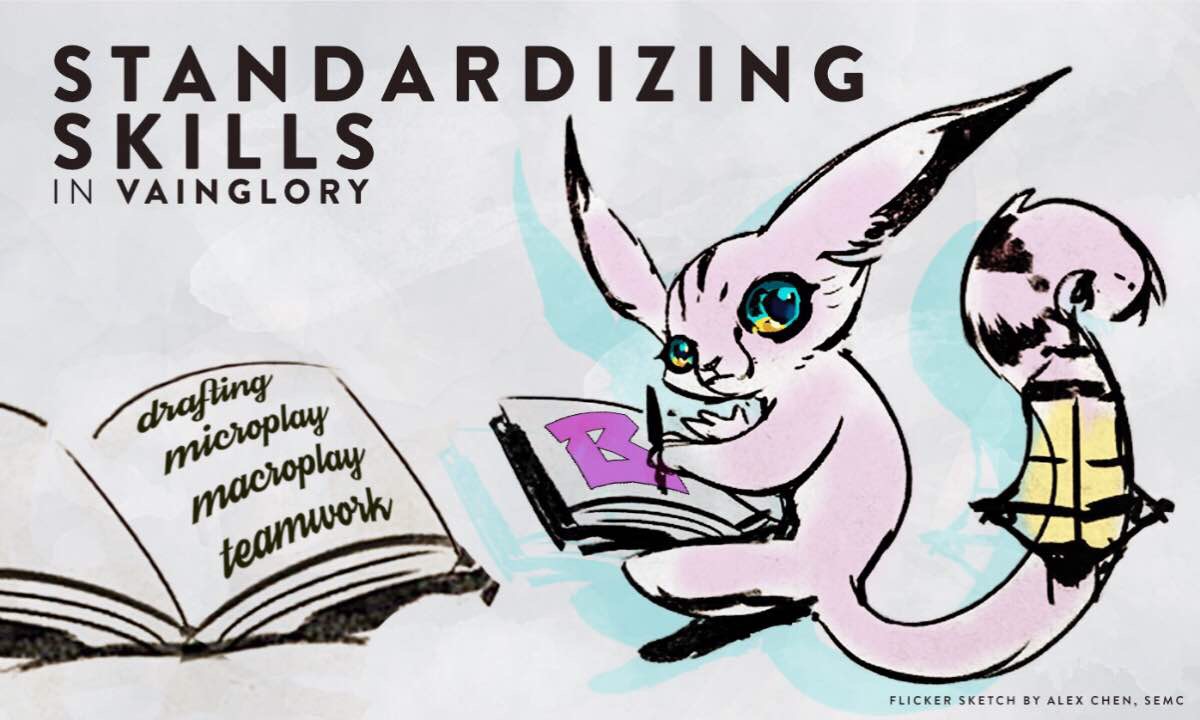 How do you win a Vainglory game? What makes a team good or bad? Why are some players better than others? This article breaks down the elements of Vainglory as a game, categorizing the skills of good teams/players into four fundamental points: Drafting, Microplay, Macroplay and Teamwork.

This article proposes a system of how teams should be compared in terms of a theoretical numerical score. It’s also a guide for teams to examine themselves and decide how they can improve.

The game begins even before the players enter the Halcyon Fold. Drafting is something that every player of every skill tier participates in, be it single ban draft, double ban draft, or even blind pick. The moment a player enters the hero selection screen, they draft.

Why is drafting important?
Drafting is a powerful part of the game—it decides the hero composition that you walk onto the Halcyon Fold with. Straight off the bat, it determines if you enter the game with an advantage or disadvantage in addition to what your win conditions are. Many games in the professional scene are decided almost purely during the draft phase, where professionals can easily capitalize on any advantage they can get over their opponent.

How easy/difficult is it to draft?
While it is an important skill that teams must have, drafting is also one of the most difficult skills to master. Drafting is like a game of chess, except that each side starts off with different pieces. It’s a game of information, where the better you know your opponent, the better you can outdraft them. Most of all, it’s a game of deep thinking, requiring great amounts mental capacity and tenacity.

Microplay, or mechanical abilities, refers to a player’s ability or skill to play heroes well. From teamfight positioning to farming in lane to kiting, microplay is the lifeblood of the game for the individual player. It differentiates good players from mediocre ones.

Why is microplay important?
Good microplay wins teamfights. A player with vastly better microplay than others could potentially wipe out a team even when outnumbered. Microplay is the main skill that distinguishes players among the lower and midrange tiers (from Unranked to Simply Amazing). At the competitive level, it’s almost a requirement for all players to be highly skilled in terms of microplay.

How easy/difficult is it to have good microplay?
Of the four fundamentals of Vainglory, microplay is the easiest to improve on, and is also one that many talented players have from the get-go. From drilling reflex blocks to practicing farming in lane, microplay can be improved by merely playing the game.

If microplay was the equivalent of tactics (short term maneuvers), macroplay would be the equivalent of strategy (long term plans). “Macro” means large-scale, or overall—the big picture. Players proficient in macroplay have a deep understanding of the game, able to gain advantages in terms of map control. From rotations to vision control to securing objectives, macroplay is all about obtaining advantages for the team, rather than just the player.

Why is macroplay important?
Good microplay wins teamfights, but good macroplay wins games. At the higher tiers where players’ mechanical skill are top-notch, macroplay is what sets the truly brilliant teams apart. At the competitive level, good macroplay allows teams to gain significant advantages in terms of gold and experience as well as positioning and control. While it isn’t as well flashy as microplay, subtle differences in macroplay skill can lead to large advantages in a game. Sometimes, even a couple of seconds gained from a rotation can lead to an entire snowball situation.

How easy/difficult is it to have good macroplay?
Good macroplay is definitely more difficult to learn. This is because in-depth knowledge in Vainglory requires loads of experience in addition to a keen mind to take note of even the most subtle of details. Improving macroplay takes time and effort, including watching VODs and theorycrafting new strategies.

Teamwork is the X factor that separates a truly great competitive team from just a group of three individually talented players. From organized teamfight positioning to clear communication, playing against a team with good synergy is like trying to battle a hydra.

Why is teamwork important?
Different people have different strengths and weaknesses, but a truly brilliant team is able to synergize to amplify their strong points while shoring up their weak points. Vainglory, after all, is a team-based game—teamwork is important. It’s diving into a teamfight knowing that your teammates got your back. It’s the perfect execution of a well-practiced or complex maneuver. It’s the communication that goes deeper than words when the game becomes too fast-paced to relay everything through voice.

How easy/difficult is it to have good teamwork?
Developing teamwork is time-consuming, and especially difficult if your teammates’ schedules don’t coincide with yours. But the requirement for setting the foundational synergy for your team is easy: just play games together. After playing together for a significant amount of time, you gradually understand how your teammates play and how to adjust your own style to compliment theirs. How fast or how easy your teamwork develops generally depends on how well your personalities match. Some players’ character go together like peanut butter and jelly, while others just clash like oil and water. It’s up to you to discuss and make compromises on how your team should work together to advance forward.

Drafting, Macroplay, Microplay and Teamwork are the main factors that make up a good team. I believe that this system is a decent method of measure to evaluate and compare teams, as well as understand one’s own team strengths and areas of improvement.

Hope this helps in terms of improving your gameplay, and understanding Vainglory!