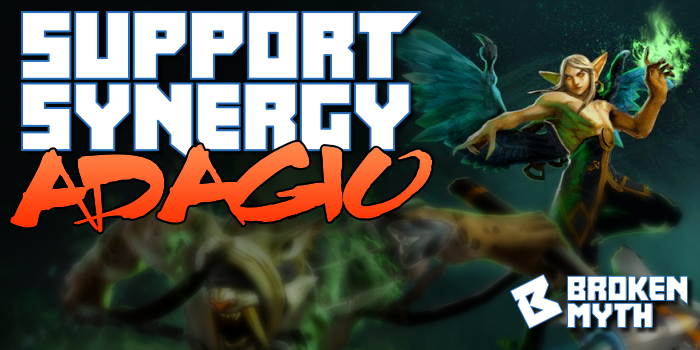 Welcome back to the Support Synergy Series! This series is all about analyzing supports and who they best synergize with, so you can always choose the best support for your team composition. The previous articles analyzed Fortress, Catherine and Ardan. Today we’ll be looking at Adagio.

Adagio has had a strange run during his time on the Halcyon Fold, never quite feeling at home in any one role. His support heyday was in patch 1.14’s fabled “buff comp,” when he would use his Agent of Wrath empowerment to turn SAW into an unkillable demi-god. Alas, all good things must end, and come 1.16 the Adagio buff comp was no more. He quickly fell out of fashion as a support, but thanks to his long range and fast attack speed, he found himself firmly in the meta as a Laner and Jungler.

Adagio’s viability as a carry has been nerfed in recent patches, but thankfully 1.20 brought some significant buffs to his support role, specifically a heal buff based on the amount of his health, and also an extra attack for Agent of Wrath. What does all that mean? Quite simply, it means Adagio support is back! Let’s dig in.

What Adagio Does Well

If you wish to see more information, click the underlined links for the corresponding wiki pages.

Whenever enemies burning with Adagio’s Arcane Fire take damage – from any source – Adagio regenerates 35% of that damage as energy. Therefore, if you play smart, Adagio will always have a full energy bar. Make sure that every time you use your Gift of Fire, you are setting an enemy ablaze – an enemy minion, Hero or turret. As you and your team damage the burning enemies, just watch your energy bar refill.

A: Gift of Fire

Adagio heals a friendly target (Hero or minion) and splashes Arcane Fire onto all nearby enemies. Furthermore, if Adagio targets himself, the fire applied to the enemies also slows them by 70% for 0.7 seconds. The heal is both a burst heal (increased by a percentage of Adagio’s health) and a HoT (heal over time).

B: Agent of Wrath

Agent of Wrath buffs its target’s next 7 attacks with bonus Crystal Power. Targets burning with Arcane Fire from Adagio’s A ability take extra damage from heroes buffed with Agent of Wrath, and if Adagio buffs himself with Agent of Wrath, then burning enemies take even more damage, essentially melting away before Adagio’s eyes — yes, even a support-Adagio.

This is Adagio’s game-changing ability: a 2 – second channeled spell that deals heavy CP damage to all enemies in a wide, rune-marked ring of destruction. Enemies burning with Arcane Fire are also stunned. Adagio gains fortified health while casting. As more points are put into the ability, its cooldown decreases while the enemies’ stun time increases. A stun during the channel will cancel this ability mid-cast, so activating a Reflex Block during the cast is a must.

To summarize, Adagio has:

Adagio is a support roam, as opposed to a tanky roam, like Ardan or Catherine. He is there to make his teammates better, by:

As such, Adagio is often not played on the front lines, like Phinn or Ardan. Instead, he is usually seen bombing heals from the rear of the fight, keeping his allies alive, and generally just setting things on fire. Then, when Adagio suddenly bolts into the middle of the fray and casts Gift of Fire, his Verse of Judgement is more than likely to catch enemies by surprise. The fortified health he receives while channeling is usually just enough to get him out of the mess he’s created, while his allies stay to clean it up. Because of this, Adagio will best pair with tanky heroes, and generally requires strong team play to succeed, with Adagio fulfilling sort of the “guardian angel” role.

Adagio lacks the health that most supports have, as well as any kind of on-demand health barrier. He has no “on-demand” stun (like Catherine or Phinn), and his only form of CC is an AoE slow that requires him to be in a fairly dangerous position to even use – and furthermore, he must heal himself to initiate the slow, preventing him from healing an ally for a few potentially crucial seconds. His Verse of Judgement has a very telegraphed cast and is thus easily countered with a Reflex Block or Crucible. His heal, even with the recent buffs, is still not as powerful as Lyra’s Imperial Sigil. On his own, a support Adagio can’t accomplish too much, and therefore requires strong teammates to be effective. His abilities have somewhat long cooldowns, so a fair amount of CD speed is recommended.

Adagio has strong synergy with:

Adagio has mild synergy with:

So who does Adagio best synergize with? Blackfeather is typically played with a Serpent’s Mask, and often finds himself in the thick of enemies. Throw in a health barrier from On Point and you have a great teammate for Adagio. Adagio’s heal only adds to Blackfeather’s maddening defensive arsenal, making him that much more difficult to kill. Since Blackfeather will usually be completely surrounded by enemies, this makes him an excellent target for Adagio’s Gift of Fire.

Glaive is a brick house and can take damage all day with Adagio healing him. His Afterburn can knock an enemy into Adagio’s Verse of Judgment, and Adagio’s slow from Gift of Fire can help Glaive stick to slippery targets. Bonus lifesteal from Bloodsong adds to the heals from Adagio, making Glaive that much harder to kill.

Krul weakness is his trouble sticking to enemies; Adagio’s slow helps him with that. The buff from Adagio’s B gives Krul a sudden increase in damage. Additionally, Krul’s From Hell’s Heart can stun an enemy in Adagio’s Verse of Judgement.

Lyra has many aspects that strongly synergize with Adagio. First of all, her heal from Imperial Sigil compliments Adagio’s, making your entire team nearly unkillable. If the enemy team decides to attack Adagio because of his relative squishiness, her Arcane Passage can help him escape. Lastly, Lyra’s Bright Bulwark creates a wonderful AoE slow for enemies to wade through while Adagio disappears them with his ultimate. Also of note is Lyra’s Heroic Perk, Principle Arcanum. Her second attack is very strong, and when buffed by Agent of Wrath, it’s devastating.

Ozo’s Carnie Luck grants him additional healing from all sources, including, you guessed it – Gift of Fire. Ozo tends to build items that magnify his lifesteal, and with an Adagio there to back him, Ozo might become immortal. Finally, Ozo tends to go deep into enemy territory with his Acrobounce, allowing Adagio to use him as a target to spread his Arcane Fire far and wide.

Reim is cut from a block of frozen iron, and can take blows for Adagio all day, even keeping enemies at bay with his Winter Spire (this ability also grants Reim fortified health from damage it inflicts upon enemies – and we like those). Lastly, Reim’s Chill Winds can root enemies, making them prime fodder for Adagio’s Verse of Judgement.

Rona has strong synergy with Adagio based not only upon her lifesteal playstyle, but because she is a bruiser who likes to jump into the middle of things, consequently keeping enemies off Adagio, and, more importantly, giving Adagio a perfect target for his Gift of Fire. Additionally, the basic-attack resets on Foesplitter allow Rona to dish out Agent of Wrath procs very quickly.

Taka can quickly get to enemies across the Fold, and as such, can be a great target for Adagio’s Agent of Wrath. If Taka is having trouble sticking to enemies, then Adagio’s slow can help him.

Alpha tends to go deep into the enemy fray and can make a good target to spread Adagio’s Arcane Fire.

Celeste has a very deep range, as does Adagio, and the two of them working in tandem can keep enemies far off your team’s turret.

Joule’s Rocket Leap can be a big help when the enemy team is focusing Adagio. She jumps in, allows Adagio to cast Gift of Fire on her, and then she scurries out, saving Adagio, and leaving behind a crowd of angry, burning enemies.

Ringo is squishy and relies on attack speed. A buff from Adagio’s Agent of Wrath will allow Ringo to explode a surprise 7-bullet massacre on his enemy. Ringo’s slow from his Achilles Shot can also work to keep an enemy from fleeing out of the range of Verse of Judgement.

SAW used to be the best companion for Adagio, but not since the buff nerf. However, if SAW is spun-up and receives Adagio’s Agent of Wrath, he can still unleash some godly damage – particularly if SAW has just activated his Mad Cannon. SAW can also use Suppressing Fire to shepherd enemies into Adagio’s ultimate.

Vox, played Weapon Power or Crystal Power, has the small benefit of Adagio’s Agent of Wrath. Vox has a devastating stutter move with his Sonic Zoom, where 4 shots are fired in very quick succession. If those 4 shots are buffed by Adagio’s B? Lights out.

Koshka, like Taka, is usually in the center of the fight, if only briefly. Adagio can use her as a target to spread Arcane Fire. If timed correctly, her Yummy Catnip Frenzy will stun an enemy just as Adagio is casting his Verse of Judgment, making escape very difficult.

Skaarf, like Celeste, has a long range and, with Adagio’s help, can keep enemies off your team’s turret. Additionally, Skaarf’s Dragon’s Breath can be used in tandem with Adagio’s ultimate, herding enemies straight into Adagio’s kill zone.

Skye’s Death From Above is devastating when positioned correctly. She can use it to block enemies from running out of Adagio’s Verse of Judgement, or she can use it stun them so they simply can’t run from it. Vicious.

Samuel’s ultimate, Oblivion, sleeps enemies, which is perfect for you-know-what: sleeping them until Adagio’s Verse of Judgement gives them a rude awakening.

Kestrel doesn’t have any particular skills or abilities that compliment Adagio’s kit. (Note: It is possible for CP Kestrel to lay down phosphor mist with Active Camo, then stun enemies with Glimmershot, allowing Adagio to use his Verse of Judgement on stunned enemies. However, this is a somewhat unreliable maneuver and as such, Kestrel remains neutral.)

Recent patches have seen a resurgence of Adagio support, but is it enough? Lyra out-heals him, everyone out-tanks him, and with his Agent of Wrath reworked in update 1.19, the one thing he did offer – an increase to team damage – is now only marginal. However, a skilled player who can make the most out of Adagio’s kit, playing alongside a skilled team working together, can make Adagio a powerhouse support, one who can heal, dish out respectable damage, and turn the tide of a match with just one ability.

We hope this article was helpful, and we’ll see you next time, when the Support Synergy series continues!

Latest posts by DeathAndTaxes (see all)