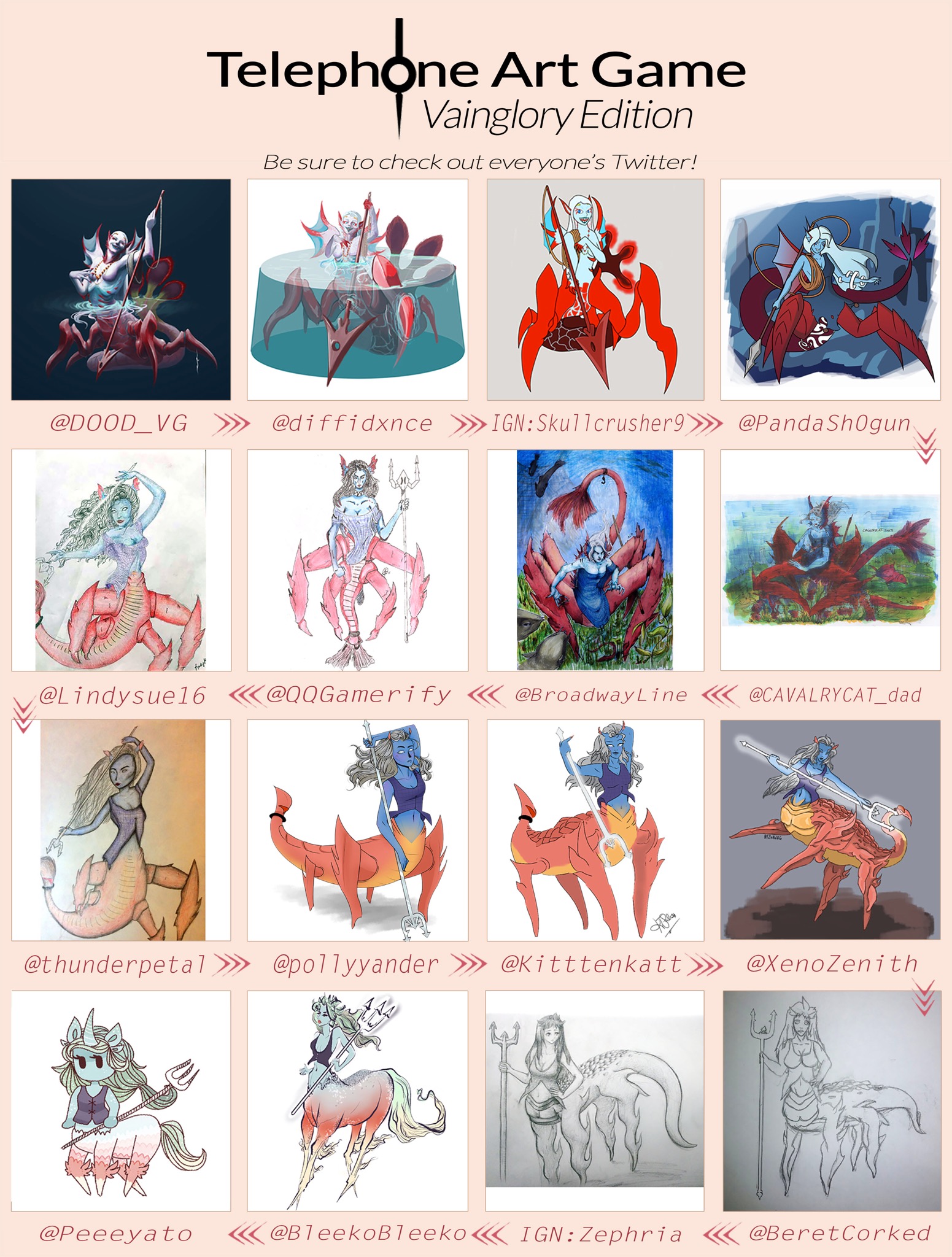 Recently, a group of artists in the Vainglory Art Discord server gathered together to play an art version of the classic “Telephone Game.” Each artist worked tirelessly, and Broken Myth is exclusively bringing you the final artwork of all participants! Let’s take a look at how this went down.

As the name suggests, the Telephone Art Game is similar in function to the classic Telephone Game. In this version, one artist draws in their preferred medium based on a prompt. Then, the individual passes their complete work to the next artist, whom must create their own masterpiece — but without reading the original prompt. This process is repeated until it reaches the final artist, to which the game is over and we can all celebrate with an endless supply of Opals… if you don’t have that already.

Community artist, guild leader, and podcast host Bleeko devised the initial description. For those of you who must know everything, read up on the game’s prompt below!

Shriek
She rose from the ocean and gasped at the brightness, raising a slender hand to shield her eyes from the glaring sun. As she peered through her fingers she saw the delight of her kind – ships! men! – and she broke out into a sharp-toothed grin.

Shriek was a siren. Her long hair was the color of ice, skin pale from a lifetime without sun in the high-pressure depths of the ocean. But whenever she grew hungry, she entered the world of men. Her eyes were a hypnotic swirl of blood-orange and glass-blue. Though her face was a smooth layer of glistening scales, her exoskeleton formed around the edges of her face, crusting over her shoulders, and extending into a shell on her back like a hermit crab. Her skin began to dry grey in the midafternoon sun, but where it was still wet the grey spread into a myriad of iridescent colors, like a pigeon. She carried herself with deceptive allure. Though she had not yet begun to sing, already the men in their ships were beginning to come closer to her, eyeing the heaps of jewelry that hung from her neck and swelled at her bust – pearls, gold, and precious jewels that came to her in shipwrecks caused by her siren’s song. She was draped in expensive silks. From the waist up, she was eerie, yet compelling and beautiful.

When Shriek opened her mouth to sing she was irresistible, but as she lifted herself up on that rock in the ocean, dragging a bloody harpoon, her horrifying lower half became visible…
Abilities
A: Harpoon Throw: Shriek throws a harpoon, dealing damage to any in its path on both throw and return.
B: Storm Summoned: Shriek rides a current that deals damage to any in its path. If she targets an enemy at the end of its range, a wave will knock the enemy back in whichever direction Shriek faces. If she does not hit an enemy with the wave, she temporarily gains increased movement speed.
C: Siren’s Call: Heroes within range automatically reveal themselves (if hidden) and migrate within vision of Shriek, unable to move in the opposite direction of the initial spell for a duration of time.

Preparation for this massive community project began back in February, and the hard work did not cease until this week. All 16 of the artists involved did a fantastic job, and well done to diffidxnce for spearheading the game. For full quality images of each individual artwork, be sure to visit the artists on Twitter or add them in-game!