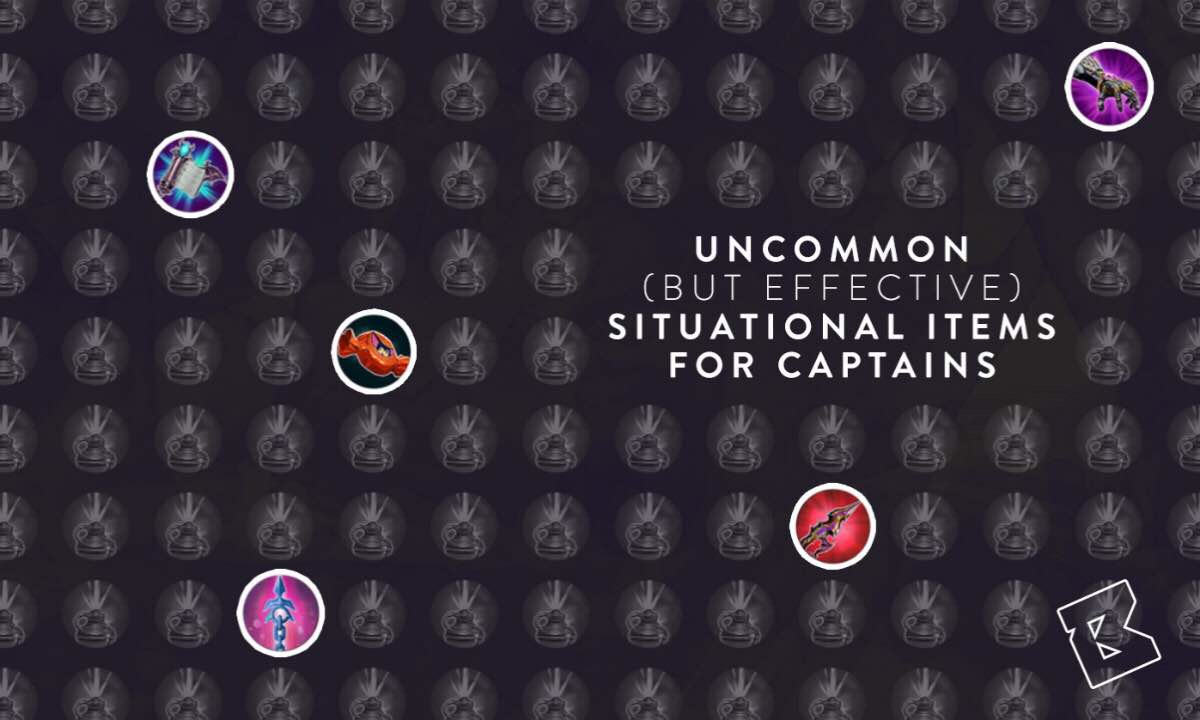 Captain builds seem very straightforward to most in Vainglory — no need to choose between a Frostburn for peel or Eve of Harvest for sustain. Just buy Fountain, Atlas, Crucible, War Treads and so on. But what do you get once the bread and butter of Captain items are already in your pocket? Maybe some extra defense?

Here comes the groundbreaking truth. Captain builds are more complicated than just getting a few main items. There are items which, when built, can turn out to be the key to winning. Some items, when used at the right time, can turn a fight around. And then there are items that simply can’t be ignored when a perfect situation arises.

This article brings to the spotlight some of the more uncommon, yet extremely effective items to be used in the appropriate situations.

Nullwave Gauntlet
Item silencing for 4 seconds? That’s a longer silence duration than Catherine’s Blast Tremor (2.8 seconds when the ability is maxed) and Vox’s Wait for It (0.7 seconds). The introduction of Nullwave Gauntlet in patch 2.0 meant that silencing (at least, item-silencing) was no longer hero-specific. Any Captain could use an item silence.

Nullwave can also be cunningly used to bait out or nullify a player’s Crucible/Reflex Block. This is then followed up by a stun, debuff, slow etc.. For example, use Nullwave on the enemy Captain before using Blast Tremor — 2.8 seconds of guaranteed team-wide silencing, as well as preventing the enemy Captain from using activables such as Fountain or War Treads… that’s game-changing.

Nullwave Gauntlet can be countered by the enemy Captain building a second Reflex Block and using it to block the item silence.

Poisoned Shiv
Having problems going against sustain heroes such as Krul or Reim? Hate it when that tanky enemy Blackfeather with a Serpent Mask is just attacking while shrugging damage off like it’s nothing? Yes, Poisoned Shiv is the answer, and it’s surprisingly effective on Captains who can just stick to an enemy and land basic attacks.

As of patch 2.5, Poisoned Shiv has become a common item for many weapon heroes (Blackfeather, Vox, Idris, etc.), to the point that it has become a core item in weapon builds. Able to apply mortal wounds every three basic attacks (around every 1.5 seconds), the effect of which will last for 2 seconds, that would mean an almost constant mortal wound debuff on an enemy, reducing any healing or pseudo-healing (fortified health and barrier!) by a third.

Poisoned Shiv also gives heroes 10% lifesteal, meaning heroes with the item will also have some added sustain to their kit.

This means that it is almost compulsory for teams to have a source of mortal wound to counter lifesteal builds or sustain heroes. Poisoned Shiv is a key item which can achieve as such, and should be prioritized on the captain when the weapon carry or jungler does not intend to get a Poisoned Shiv themselves.

Shiversteel
One of the more underrated items on the Halcyon Fold, Shiversteel is a surprisingly effective item when placed in the right hands. With a 40% slow for 1.2 seconds, it is less powerful by some other slow abilities out there (e.g. On Point, Principle Arcanum) which have lower cooldowns or larger slow effects. However, Shiversteel provides an on-demand slow that doesn’t require skilled targeting, and the item can be activated for up to 4 seconds (6 seconds if by a melee hero), meaning that the slow effects can be potentially applied for up to 7.2 seconds (if you’re on a melee hero). Shiversteel can also be applied on multiple targets — just land basic attacks on them when Shiversteel is activated

The ability to apply slows on multiple enemies through basic attacks is a great advantage when your team faces mobile — but squishy — carries. Having problems catching that elusive Vox or slippery Skye? Just activate Shiversteel and land a basic attack. The Shiversteel slow animation isn’t very flashy, so your target might even waste their boots activation or abilities trying to sprint away during the slow duration.

Dragonblood Contract
A potential team-wide 30% slow for 2 seconds and 100 bonus crystal damage when a basic attack from an ally hits an enemy hero affected by the item? It costs only 300 gold? For how much chaos and damage this item to cause in the early game for such a low cost, its aggressive potential is insane.

Dragonblood Contract can easily be bought at the start of the game, and used immediately when your team engages in a teamfight. With 100 bonus crystal damage (about ⅛ of max health at level 1) dealt to every hero that’s marked by Dragonblood and attacked by an ally, it’s enough to turn the tides of an early game teamfight.

When your team is ready to initiate a fight, run up to enemies while they’re grouped up and activate Dragonblood Contract. Have your allies basic attack enemies to consume the Dragonblood mark, which activates the slow and deals crystal damage.

Minion Candy
Minion Candy is one of the most underrated items in the game; as a consumable item, it is very rarely considered by many Captains. But seriously, who doesn’t love food. Minion Candy provides allied lane minions, the allied crystal sentry or the neutral gold miner significant offensive and defensive boosts. This is important during teamfights, as any extra damage can help to turn the tide. Putting minions on steroids for just 50 gold? That’s insane.

While these aren’t the only items which are great on Captain, I thought these few deserve the attention and are easier to grasp in terms of when to buy and how to use them. For players who have more experience with the game, feel free to explore other items on Captains such as Echo, Shatterglass, Frostburn, Bonesaw, and sometimes even Journey Boots! (No, this is not an excuse to throw your ranked games.)