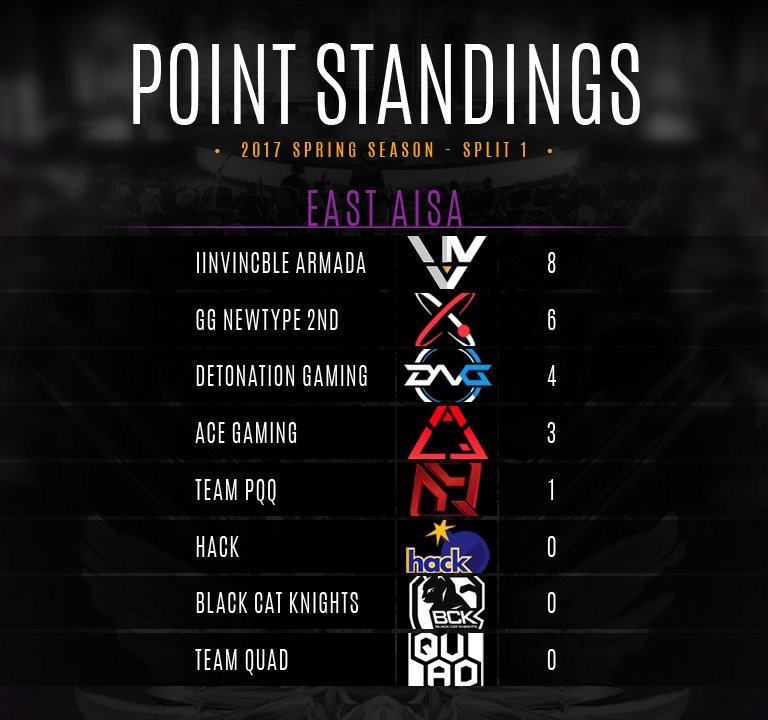 East Asia began their Vainglory 8 Spring Split 1 last week and we saw some fantastic play! As week two approaches, Broken Myth has the recap you need of last week’s play and what to look forward to in EA Vainglory 8 this week. Let’s begin the breakdown!

EA – What to Watch

Invincible Armada, previously Phoenix Armada, lived up to their name by not losing a single game last week. GG Newtype 2nd came up against them in the finals, while the Japanese representatives of the 2016 World Championships, Detonation Gaming, managed to take home 3rd place last week. Three teams came up without wins last week, including: Black Cat Knights, Team Quad and 2016 World Championship’s Wildcard — Hack.

All matches that took place last weekend seemed to be one sided 2-0s with one team sporting an exception: Ace Gaming. Their matches with Team PQQ and Detonation both went to game three and had very close moments.

Matches To Look Forward To

Team PQQ looked close to making a breakout against Ace Gaming last weekend but was unable to. They need to make an upset against GG Newtype 2nd to keep rising up on the rankings. Keep an eye out for possible strange bans from PQQ, the only team to first ban Grumpjaw (or ban him at all) last week.

When Ace Gaming faced Hack at VGL Korea Summer 2016, they were able to take a 2-1 win. As these teams face off early next week, Hack is looking to try and get on the scoreboard. Will this be a repeat of the tournament, or can Hack come out on top?

Detonation Gaming was easily taken out in the second round by Invincible Armada last week and now are up to face them in the first round. They pulled out interesting heroes like Ozo in their previous matches. With a week to plan and practice, will they have a new strategy to come out on top?

Black Cat Knights and Team Quad will both have a chance to score points this week. With the loser likely to end up rock bottom in the rankings, this match will be important. Last week, we exclusively saw Black Cat Knights choose Glaive and Ardan in the Jungle and Captain roles. Will they shake things up this week?

Heroes To Watch For

EA seems to have little interest in Fortress compared to other regions, with only a single pick resulting in a loss. Presently, both WP and CP Joule also are not catching on in EA, seeing only a singular pick. However, EA did show a spark of creativity as Ace Gaming brought out a Captain Grumpjaw to combine with Kestrel for their one victory against Detonation Gaming.

From last week’s stats, the EA meta seems to be very centralized. Ringo and Vox are the top chosen Carries by far with Kestrel making a small dent. While Taka was in the top 5 most banned Junglers, he was rarely chosen when free. Koshka and Samuel are currently the favored Jungle picks. Lyra was the most common first banned hero, but when she is free, she is almost always chosen as Captain. With her out of the equation the focus turns to Adagio and Lance to fill the role.

Matches will begin this week at 5pm JST and will be aired on VaingloryKR’s Twitch with Korean commentary and on VaingloryJP’s OpenRec with Japanese commentary. VODs of last week’s matches can also be found earlier in this post. Which match are you most excited to see? Let us know in the comments, and we’ll see you next week for another EA Vainglory 8 Update!