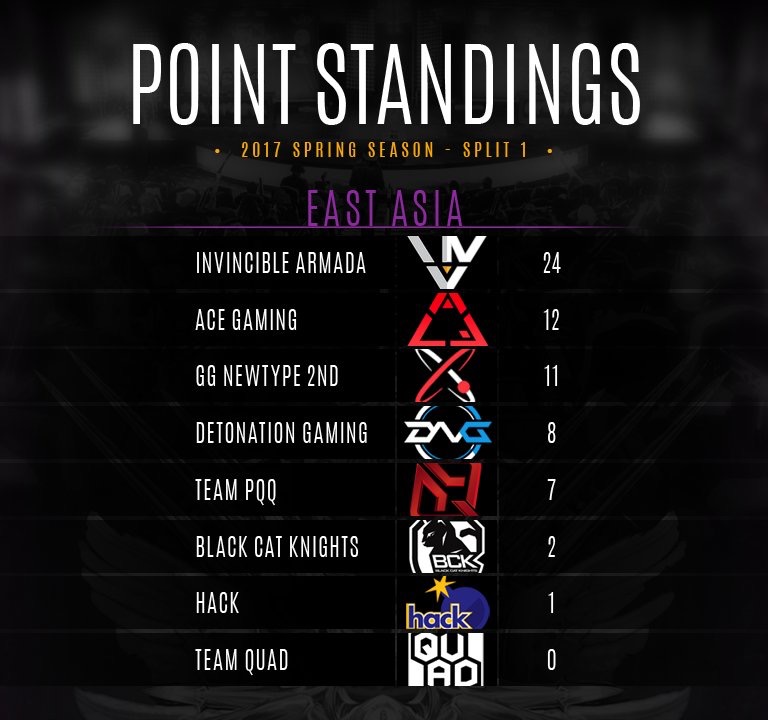 The third week of the EA Vainglory 8 has concluded and week 4 rapidly approaches. Last week saw its first major diversification thus far. With the Challenger Battles on the horizon and Patch 2.3 in the mix, there is a lot to look forward to this week. Broken Myth has you covered, so let’s begin the breakdown!

Matches To Watch For

Hack, 2016 World Championship participants, have their backs up against the wall. Their only chance to avoid the Challenger Battles begins with taking down Team Quad. While this task is doable, they have to then defeat the winner of GG Newtype 2nd vs Invincible Armada.

While Invincible Armada did drop its first game last week, they are still an incredible force. GG Newtype 2nd has already defeated Hack prior 2-0 during this split as well. Hack will be bringing the best it has to offer fighting for a miracle this weekend — keep your eyes on them.

Black Cat Knights have had a rough season despite their third place finish week two. Having lost to both Invincible Armada and GG Newtype 2nd, it seems unlikely they can take down Ace Gaming this weekend. Even if they do make a deep run into bracket, they would have to place third with extra wins or make second place.

If this happens however, the results of Detonation Gaming vs Team PQQ could become incredibly important. Both teams are very close in score and face off first in week four. Team PQQ won this match-up just last week 2-0, but watch to see if Detonation Gaming comes with a new game plan for the win.

Heroes To Watch For

EA finally saw small changes to the meta this week after weeks of similar picks. Petal has joined the Jungler fray! She was picked as many times as the overly popular Samuel this week. Kestrel also rivaled Koshka, another immensely popular pick for Jungle, this week. Celeste even saw limited selections as well.

Team PQQ has popularized a Grumpjaw and Kestrel combo recently. Captain Grumpjaw is now even more possibly with recent buffs in Patch 2.3. This new trend could expand the popularity of Grumpjaw even further, so keep an eye out.

On the note of Captains, Catherine saw a small surge of picks last week alongside Phinn. While Lance, Adagio and Ardan still remain the most popular, these picks could show a trend towards trying new hero compositions.

Matches will begin this week at 5 PM JST and will be aired on VaingloryKR’s Twitch with Korean commentary and on VaingloryJP’s OpenRec with Japanese commentary. Matches this week will take place on Patch 2.3. VODs of last week’s matches can also be found earlier in this post. Which match are you most excited to see? Let us know in the comments, and we’ll see you next week for another EA Vainglory 8 Update!