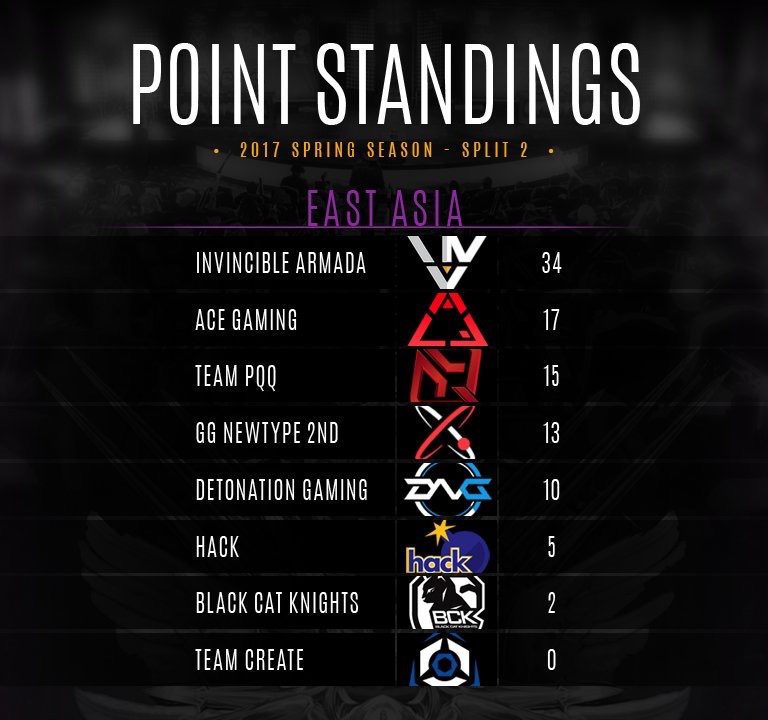 The first week of Split 2 for the EA Vainglory 8 revealed huge changes! Last week, Armada was no longer invincible and teams began struggling to find the key out of Challengers. As EA further develops its own meta, what will happen in Week 2? Read up on the EA Vainglory 8 to see what’s expected next week only on Broken Myth!

Invincible Armada is invincible no more! Last week they not only dropped games to Hack and Detonation. As well, they were defeated in the finals by PQQ in a nail-biting series. PQQ was able to win 12-0 in game 2, and game three went over 30 minutes with a last minute save at the Vain Crystal, securing them the win.

This week these two titans face off once again in one of the first matches in the bracket. If PQQ pulls out a win, while not being at the top of the rankings, it could show a new reign of dominance shaking up the entire region. If you can only watch one EA game this week: this is it.

Previous World Championship representative Hack are looking to try and leave the danger zone and start heading higher in the rankings. They start with easier opponents this week in Black Cat Knights. However, they also come up against the winner of Ace Gaming vs GG NEWtype 2nd.

GG NEWtype 2nd wants to rise up the rankings, and their first match this week is the perfect opportunity. If they can defeat Ace Gaming, they stand a strong chance to gain enough points to dethrone them from third place.

EA kept a large and familiar focus on Samual last week. Despite an abysmal 33% win-rate, he was tied as the second most banned hero alongside Glaive and Adagio. Lyra was banned every single game besides one — where she was used to win; making the focus on her well earned.

While never banned, Celeste was a very popular pick last week, even though she only managed a 42% win-rate. Skye was also a very common pick that only did slightly better at 50%. In terms of Captains, Phinn and Adagio were the most successful, with Phinn going undefeated and Adagio taking home an 80% win-rate to boot.

Currently, EA has not shown as much interest in heroes popular in other regions. Baron, Catherine and Fortress have not been chosen. Popular Carry Vox has also not had a single victory in EA, and Gwen has taken priority in the lane as well as brought home a 75% win-rate.

Matches will begin this week at 5 PM JST and will be aired on VaingloryKR’s Twitch with Korean commentary and on VaingloryJP’s OpenRec with Japanese commentary. Which match are you most excited to see? Let us know in the comments, and we’ll see you next week for another EA Vainglory 8 Update!