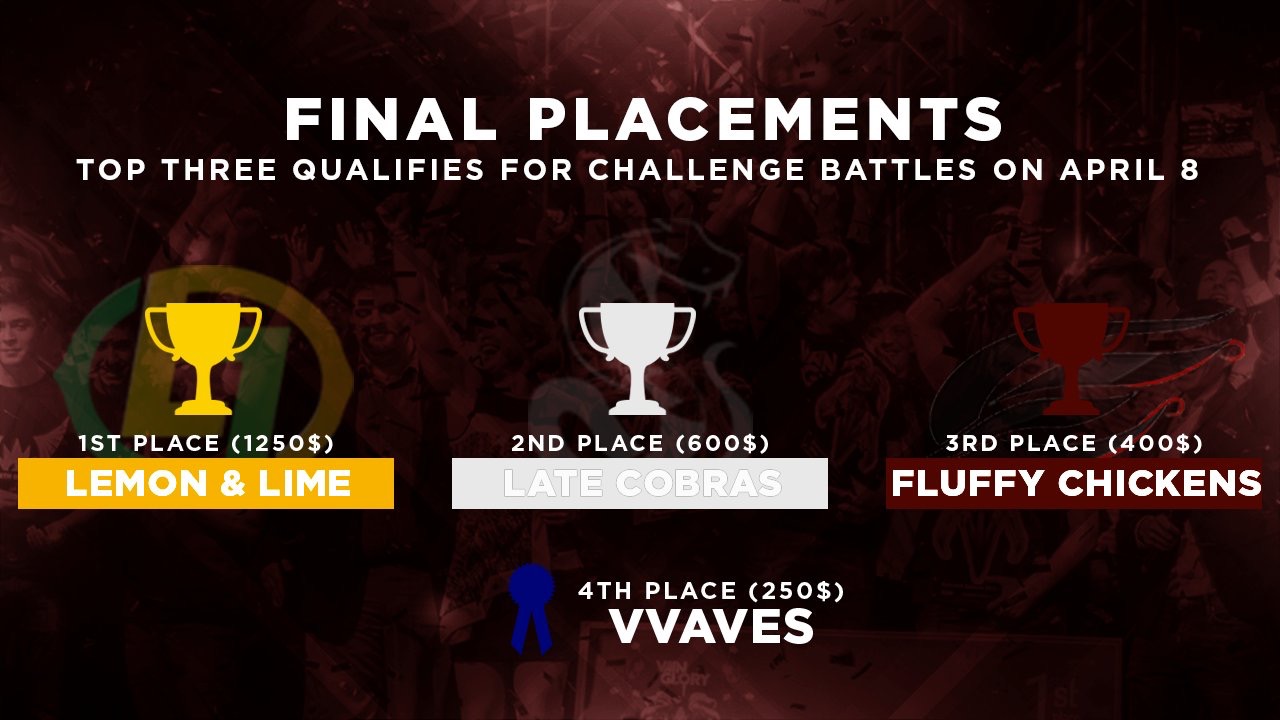 After grueling battles through the VGL Challenger Series, Lemon and Lime, Last Cobras and Fluffy Chickens will have their chance to join the EU Vainglory 8! Here at Broken Myth we have taken thorough info and data on all teams competing from matches shown on stream to break down who we believe will win each challenger battle and why. Take a look at this in-depth Vainglory 8 Challenger Battle breakdown and preview for EU!

Lemon and Lime vs Rising Lotus

Rising Lotus had been suffering major defeats before a recent 2-0 upset against Cyclone, as well as taking off one game against SK Gaming last week. With the momentum they have been building, they look to be the strongest team from being challenged from Vainglory 8 in Europe currently.

Lemon and Lime are no strangers to qualifiers for the Vainglory 8 having previous taken a part of the Spring 2016 Qualifiers only to end up in 10th, two spots away from the league. In the VGL Challenger series, they occasionally dropped games to lower seeded opponents and had close calls.

While Loere has heavily favored Kestrel, Apfel showed during the Challanger Series that he has an incredibly deep hero pool, which includes Skaarf, Rona, Gwen and Lyra. AgOny and HellsDevil also seem to heavily favor one hero with severely shallower hero pools than Lemon and Lime have to offer.

With 2.3 bringing some large changes to attack speed and potential viable heroes, Lemon and Lime’s deeper hero pool will help them be better prepared for this match. As long as they bring on consistent play, even Rising Lotus with their recent momentum will not be able to take them down. If Lemon and Lime target Rising Lotus’s comfort picks and make smart drafting decisions, they are likely to take the match.

Late Cobras came in as the 11th seed in the VGL Challenger series and surprised many when they pulled in a second place victory, even 2-0ing first place finishers Lemon and Lime during bracket. They only took one defeat in bracket before their eventual loss to Lemon and Lime to take second, showing strong and consistent play.

Mousesports has yet to win a single game this year in the Vainglory 8. They have shown sloppy gameplay and drafts, like a Carry Ardan from last weekend. They often defeat themselves before the match even begins. Thus, one major upside is their subs all have rotated into play, offering potential variety and surprises.

Mousesports has shown disappointing play thus far in Spring. It would be very surprising to see them take the win to the more consistent Late Cobras. There is a possibility for this match to be closer with Late Cobras being newer to double bans, but we still expect them to take the victory.

Denial eSports started off with a solid third place finish in week one of the first Spring Split, but then slowly managed to not win a single game the rest of the split. The team definitely has talent and performs solidly in the draft, though sometimes pushes to the limits of what truly can be considered the meta. Plus, the team contains Bashn, their current Captain who competed with SNOW Av in the 2016 World Championships to anchor the team.

Fluffy Chickens showed dominance as first seed of the VGL Challenger Series, only being sent to the losers bracket after unfortunate internet connection issues in their match with Late Cobras. A highly aggressive team, they like to explode out of the gate and leave their opponents sitting in the Vain Crystal dust.

While Fluffy Chickens may truly be sporting a fantastic roster, all it takes is a solid draft to shut down their potential aggression and counter it to put the team in a tough spot. Veteran Bashn will be able to lead his team in this regard. As well, with attack speed changes in Update 2.3, Fluffy Chicken’s usual intense strategies may have to be reprogrammed, thus leaving them less prepared for the fight.

We hope you liked this EU Challenger Battle Preview and Breakdown! Matches will begin at 9 AM PDT and will be streamed on the official Vainglory Twitch channel. Do you agree or disagree with our predictions? Tell us in the comments below, and be sure to come back to Broken Myth for future EU Vainglory 8 coverage!