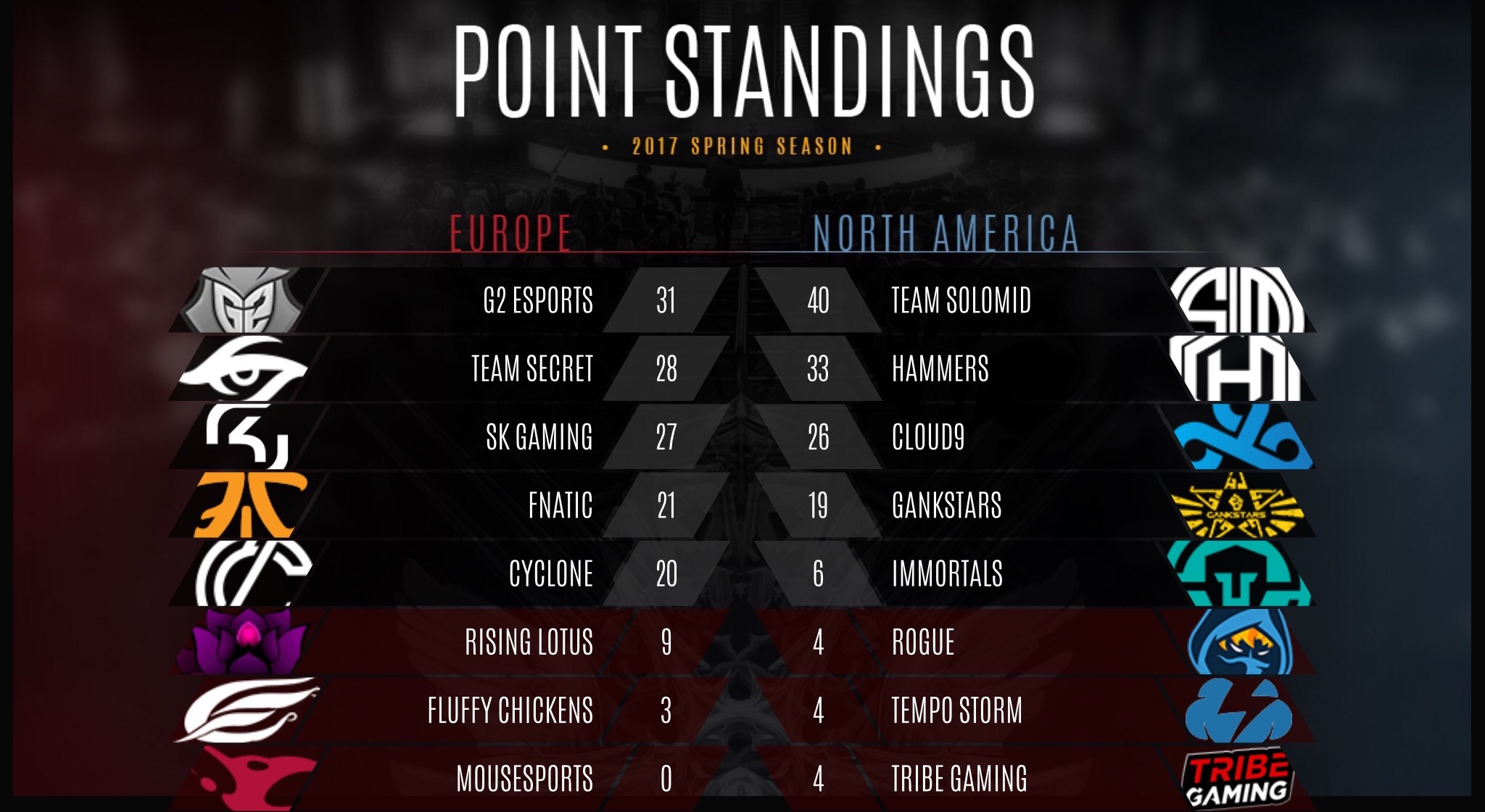 The third week of Vainglory 8 Split 2 is soon here! Last week, a new team started to show dominance in NA, the top teams of Europe shuffled their placement and heroes saw newfound popularity. Catch up on week 2 and prepare for the next with this NA & EU Vainglory 8 update!

While teams in Europe are mostly secure in their placements for future Challenger Battles, the shuffle for two byes in the Unified Championships is live and well with many teams single points away from shifting their standings.

SK Gaming takes on G2, last week’s finalists, in round one. If G2 loses, they will likely sink down past the top two, being unable to gain more points this week. For SK Gaming, this could mean the exact opposite — a chance to the very top!

FNATIC and Cyclone are one point away from each other in the rankings. While FNATIC likely has a more easy road against Rising Lotus, Cyclone has bigger fish to fry if they want to stay ranked 5th or climb higher.

Cyclone showed dominance early on in Split 1, but have since lost speed. During that Split, they were able to defeat this week’s opponents, Team Secret, but recently lost against them 0-2. Team Secret will want to have their chance to rise even further and possibly take the number one spot.

Samuel has seen wide success in the EU meta, taking home an impressive 75% win-rate. Koshka, Krul, Fortress and Blackfeather all have brought in 60% or higher win-rates in the jungle as well. Europe has also seen Grumpjaw and Idris used to success; their jungle choices are truly diverse!

While normally known for his unusual Melee Carry choices, KValafar has been showing Ringo work in 2.3 — his picks of the hero resulting in an 83% win-rate. Watch to see if other teams pick up Ringo this coming week.

For Captains, Phinn rose quickly in in popularity this week being chosen on seven occasions. However, Ardan has been far more successful, seeing an 83% win-rate in Split 2 for EU. Watch for if Phinn’s popularity continues or if other heroes like Lyra and Lance see more play.

Immense amounts are on the line as Immortals faces Tempo Storm this week. Not only will the winner likely avoid the danger zone and future challenger battles, but will secure a place in the Unified Championships.

While Tempo Storm has recently shown strong performances, Immortals on average has farmed more gold per game in Split 2. Both teams will be bringing everything to the table. Look forward to an intense match!

Hammers Esports has been able to take down the once unstoppable TSM twice during this Split in the finals. This week, they face head to head in the first round. Both teams want their points to maintain a safe place in the top two for byes in the Unified Championships.

TSM has been testing strange compositions in games, recently playing an unsuccessful Captain Samuel against Cloud9. Do they have potentially better tricks up their sleeves against Hammers?

While Gwen was considered both a target ban and pick in Update 2.3, Ringo has thus far returned a far better win-rate at 71% compared to her 38%. Vox’s win-rate has also been dismal at only 27%. North America might be looking for new heroes in the lane. Watch the drafts closely.

Samuel has been the most played hero in the jungle, though also boasts a low win-rate of only 30%. Both Taka and Grumpjaw currently have not lost a game when played in the jungle. Blackfeather boasts a 66% win-rate as well. Will teams keep obstinately picking Samuel, or look for new and more successful options?

Be sure to catch the action this weekend at Vainglory’s Twitch. Matches for NA & EU begin at 9 AM PDT, and a full schedule is available in this post. Which match are you most excited to see? Let us know in the comments, and we’ll see you next week for another NA & EU Vainglory 8 Update!