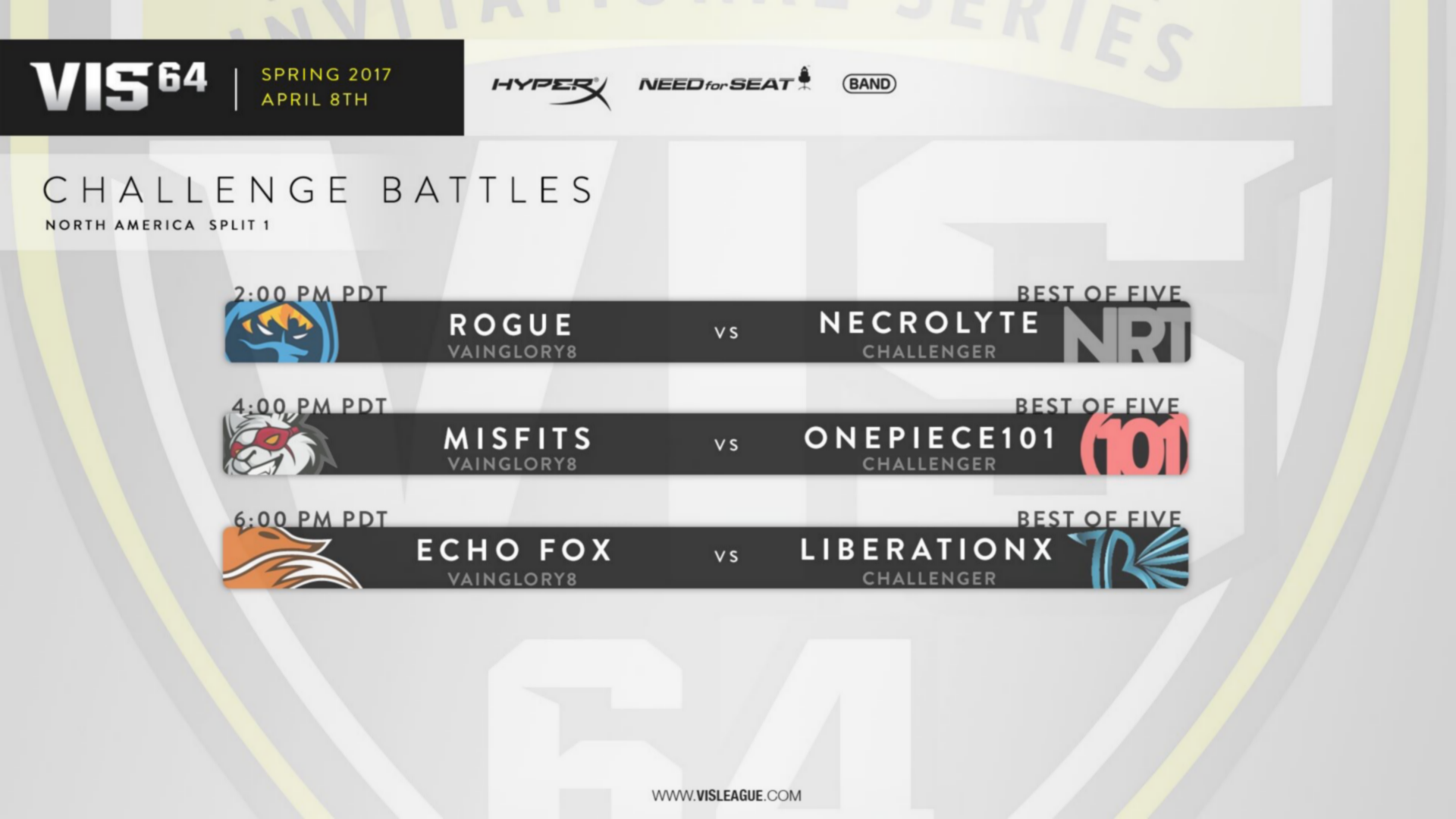 After a hard fought bracket in the VIS64 NA Challenger Series, One Piece 101, LiberationX and Necrolyte will have their chance to join the North American Vainglory 8! Here at Broken Myth we have taken thorough info and data on all teams competing from matches shown on stream to break down who we believe will win each challenger battle and why. Take a look at this in-depth Vainglory 8 Challenger Battle breakdown and preview for NA!

One Piece 101 vs Misfits

One of the new big esports teams to get into Vainglory, Misfits had the longest win streak during the Run The Gauntlet event. Unfortunately, they have not had similar luck in the Vainglory 8 as they have not managed to win a single game. They make solid draft choices on meta, but just don’t seem to be able to execute at a high enough level to beat the best teams currently in the NA Vainglory 8.

One Piece 101 is a team that started showing their potential all the way back in the VIS Pro Winter Spit 2 with a deep run into the bracket alongside professional teams currently in the Vainglory 8! This team was the surefire favorite to make it through the VIS64 Challenger Series.

Both of these teams make solid decisions in the draft and on the Halcyon Fold. The biggest determiner of the winner will be who comes in with the most raw skill which One Piece 101 has. Plus, the bravado and creativity One Piece 101 have been kNoam to bring to the table helps push them over the top.

Echo Fox contains some serious talent on its roster. Unfortunately, this has not been able to help them find success within the Vainglory 8. They have slowly been improving and boast the ability to play almost any hero and strategy. They generally execute thanks to their training from team coach FooJee.

LiberationX is looking to return to the Vainglory 8 once again and reclaim their glory from seasons past. Having been a presence since the NA Autumn 2015 Championship, these players seek the main stage once again for a chance to show they never should have left it.

Many times, Echo Fox does not feel like a cohesive unit. Despite their larger hero pool, team support and excellent coaching, the long term synergy built by LiberationX will be just what they need to come out on top. This was the hardest decision in our predictions articles thus far — expect the series to be very close!

Necrolyte, the team that managed to take a win against One Piece 101! These players turned heads by performing this great feat. Now, many look at this very flexible team’s way to see if they can battle their way to the Vainglory 8.

However, Rogue has been building small bit of momentum recently, having just managed to not be eliminated in round one for the first time since week 1! When Rogue is on fire, there is no stopping them.

The veteran presence Rogue brings to the table is bound to surprise Necrolyte, and being together a bit longer will help with synergy for the team. So long as Rouge keeps a level head and doesn’t try anything crazy, that should continue to stay level in the Vainglory 8.

We hope you liked this NA Challenger Battle Preview and Breakdown! Matches will begin at 9 AM PDT and will be streamed on the official Vainglory Twitch channel. Do you agree or disagree with our predictions? Tell us in the comments below and be sure to keep an eye on Broken Myth for future NA Vainglory 8 coverage!