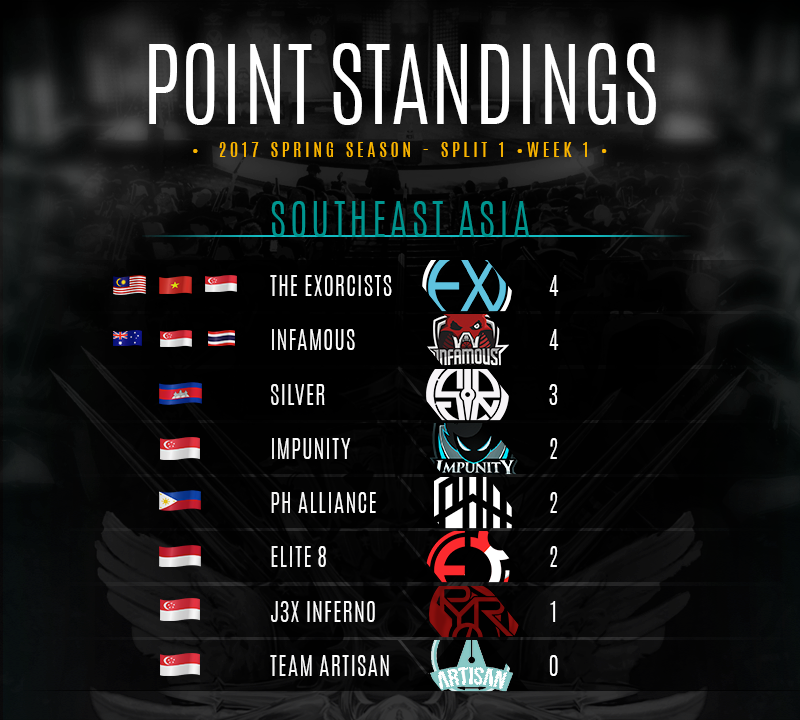 Need to catch up on the SEA Vainglory 8? Broken Myth has you covered! SEA takes a different format than the other official Vainglory tournaments with a Round Robin format instead of weekly elimination brackets. Last week we saw upsets, curious picks and teams taking their first standings on the board. It’s time for a quick look at the biggest highlights!

SEA – What to Watch

The major upset of last week: Infamous giving the Impunity roster its first 2-0 loss in Vainglory 8 history. Not only this, but the final match was won with a 14-0 kill lead. The current roster for Impunity represented SEA for the 2016 World Championships, and seeing them taken down that easily was shocking.

Silver and PH Alliance were one of only two matches to have a third game, showing their skills are very equal. While some matches will take place off stream this week, Impunity faces both Silver and PH Alliance in the coming week. This roster has to prove if their success at being able to attend Worlds was a one time fluke, or if they can beat down the new blood to regain their place on top; that journey starts this week.

Team Artisan may be in a hard spot. Both Exorcists and PH Alliance achieved strong performances last week but has a chance to rise from the bottom spot. J3X Inferno also has some tough matches this week before they both meet up. These bottom two teams will likely be battling to decide who stays on bottom, so keep an eye out for who comes out on top.

However, the biggest match this week shows in Exorcists vs. Infamous. Both tied currently for first place, only one can come out as the top dog of SEA. Infamous has both QuiXotic and PerfectBladeX as Junglers — whom will be picked for this important match? llBaby has shown a preference for either Joule or SAW thus far. Look to see if uNi from Infamous has plans to counter his opposing Carry for these picks!

Lyra was banned in all but two matches last week and is currently undefeated in the SEA Vainglory 8. The second most banned hero in SEA last week? Ozo. While other regions find Ozo a niche pick, SEA sees him picked with or without healers on his side.

Ringo showed unparalleled popularity as a Carry. While Vox also had some popularity, the surprising popularity of both SAW and Glaive as Carries is something to watch for. In the Jungle, both Alpha and Taka were the most popular picks, but both only sported close to a 50% win rate.

Be sure to catch the SEA Vainglory 8 action this weekend over on Tesseract eSport’s Mobcrush. Matches begin at 6 PM SGT. Which match are you most excited to see? Let us know in the comments, and we’ll see you next week with another SEA Vainglory 8 Update!