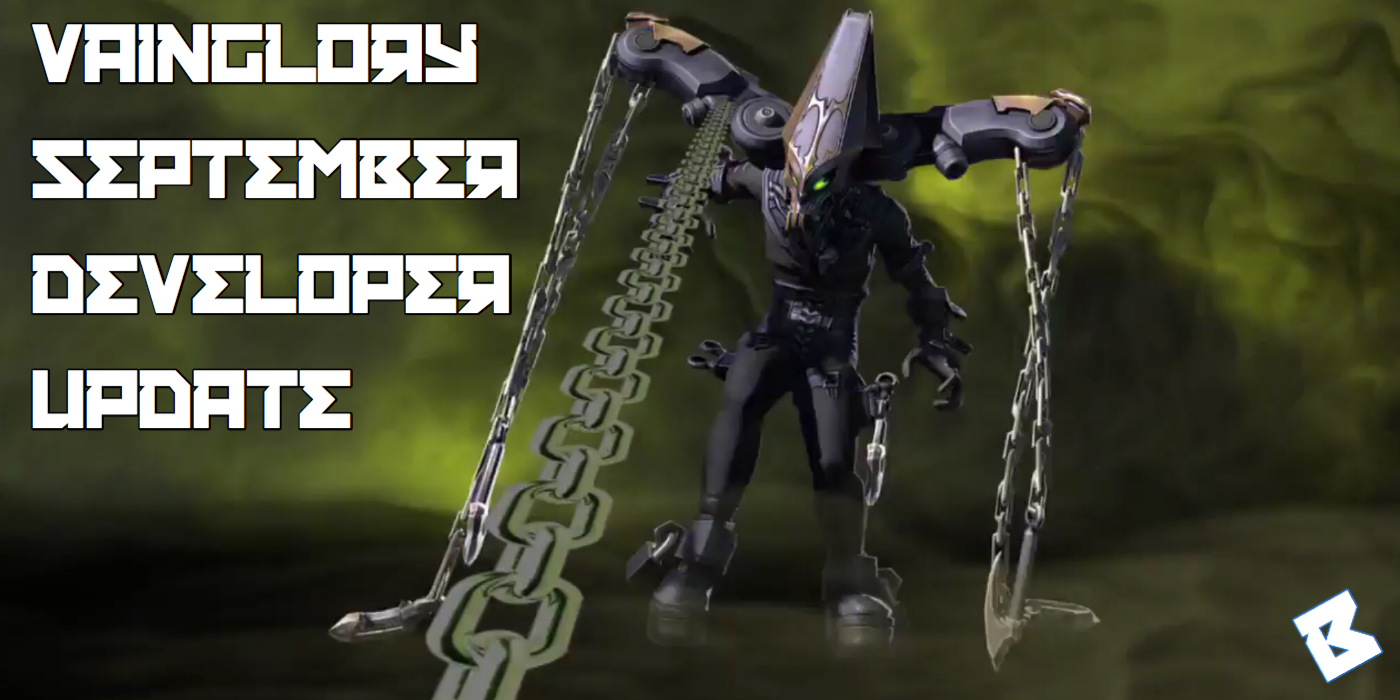 In the sixth edition of the Vainglory Developer Update series, Playoffbeard interviewed four devs in a panel interview at the Summer Western Unified Live Championships.

This Dev Update follows the release of patch 2.8, where the game received several changes to the macro gameplay and two new items, all focused on increasing action and forcing more decisions around the “battle readiness” concept. You can find additional articles and insight on update 2.8 here on brokenmyth.net.

This Developer Update was in the format of a Q & A panel with four of the devs from SEMC: Zekent, Heini Loquori, and Nansen. They fielded a variety of questions, most sourced from community submissions. Answers have been paraphrased for the purposes of this article.

Why did SEMC make these changes [in update 2.8]?

Fielded by Zekent –
SEMC wanted to shift to a more active meta with many more kills and deaths. This is why we see a reduction in sustain, and why they’ve shifted from potions to the healing flask. Decisions surrounding whether to fight or farm, and when and whether to heal now have much more impact on macro gameplay.

Zekent hinted that additional new items would be coming in the Autumn season!

What was 0 downtime deploy for 2.8 and will it happen again?

Fielded by Loquori –
The tech behind the zero-downtime supports SEMC’s goal of a “buttery-smooth” experience in two different ways. FIrst, there was no downtime for Update 2.8 in EU. Players simply downloaded the updated game and were able to begin playing immediately. Second, the tech allows SEMC to do long-term testing of the new patch in advance, which should lead to fewer bugs and glitches post-update.

What part of Vainglory are you most proud of, and what do you think Vainglory’s biggest misstep has been?

Hat tip to idmonfish for the question; Fielded by Nansen –
All are proud to be part of SEMC – there’s a lot to be proud of! It’s a different type of company, driven by passionate workers, passionate players, and a passionate community. Every dev cares about the community and the came could not have reached where it is today without it. Beyond the company, they’re proud to be leading the industry with cutting-edge technology and doing it with such a small team.

As far as missteps, “there’s a lot to improve on.” Looking around the office, everyone knows the game is not perfect. “We’ve got a lot to do for sure, but player progression is probably the place we need to work on the most,” in terms of new player support (tutorials) and older player engagement (more incentive to play beyond stomping noobs with smurfs).

What about 5V5? Tell us something!

Fielded by Zekent –
There have been around 30 iterations of 5V5 map. The main focus is to ensure that the game maintains the feel of the Halcyon Fold with a jungle that is important and allows for action and suspense. Winning the game by destroying the Vain Crystal needs to be epic. So, there will be defenses on it. When you end the game, it must feel like you take down a boss.

One of the best things about 5V5 is are the new objectives and strategies that come with the new map, and the focus on macro strategy these necessitate. Before, you could rank up by just having good mechanics; with 5V5, you must also understand macro play – when to be where and when to pick your fights.

5V5 Launch targeted for December… right when Worlds will take place in Singapore. What does this mean for the esports community?

Fielded by Heini –
Returning to Singapore is like a homecoming for SEMC. It was basically the last day of 2013 when Vainglory launched its beta in Singapore. Now, we’re coming home to celebrate the evolution of the game, celebrate the World Championship, and celebrate the community and all players. SEMC is also really excited about the improvements to infrastructure in the SEA region – there may be more yet to do, but they’re making progress!

Heini also gave a shout out to Impunity, the SEA Summer champions, guaranteeing their spot at Worlds. Impunity is a team from Singapore, and the guild has a heavy involvement in the local Vainglory scene.

Touch on some of the future Vainglory systems.

Fielded by Nansen –
As mentioned previously, player progression is a big focus. It involves the way SEMC thinks about rank, rewards, and reward systems. There’s a lot of work to be done – things like the skin progression system have been outgrown.

More broadly, SEMC is thinking about social systems. Vainglory is better when you play together. SEMC recognizes this and wants to make it easier to find friends by building guilds, and maybe find local friends to play live.

Will SEMC ever respond to the community’s request to improve guilds?

Hat tip to iCON guild for the question; FIelded by Nansen –
Guilds are something we focused on in 2.0; we know that was a few months ago. Guilds have been the birthplace of the competitive teams. We know there’s more we want to do, we need to do – but SEMC is small company with limited resources. In the long term, guilds need something to do together, which will come together with the focus of progression following the development of 5V5.

Heini: Rona’s voiceover: “Donkey bridge…” is all because of Heini.
Loquori: Lance’s voiceover references Monty Python and the Holy Grail – “tis is a silly place.”
Zekent: Every dance has a reference to something – some live on in the taunts.
Nansen: CaptainNeato portrait on the cheater item.
Playoffbeard: All SugarVenom lore. Back in 2014, something was put in the lore which plays into Autumn 2017 (new hero). Find it!

At the end of the Vainglory September Developer Update panel, SEMC released the teaser video for their new hero, Churnwalker, coming in Update 2.9 this Autumn. “He’s pretty awesome – you’ll see.”

I’m in the dark as the rest of you when it comes to Churnwalker’s abilities and lore. However, based on the video, I’d expect a CC-oriented hero, with stuns, disorientations, fear, pulls, and/or roots. Maybe the lore has hints – if you find it, let me know!