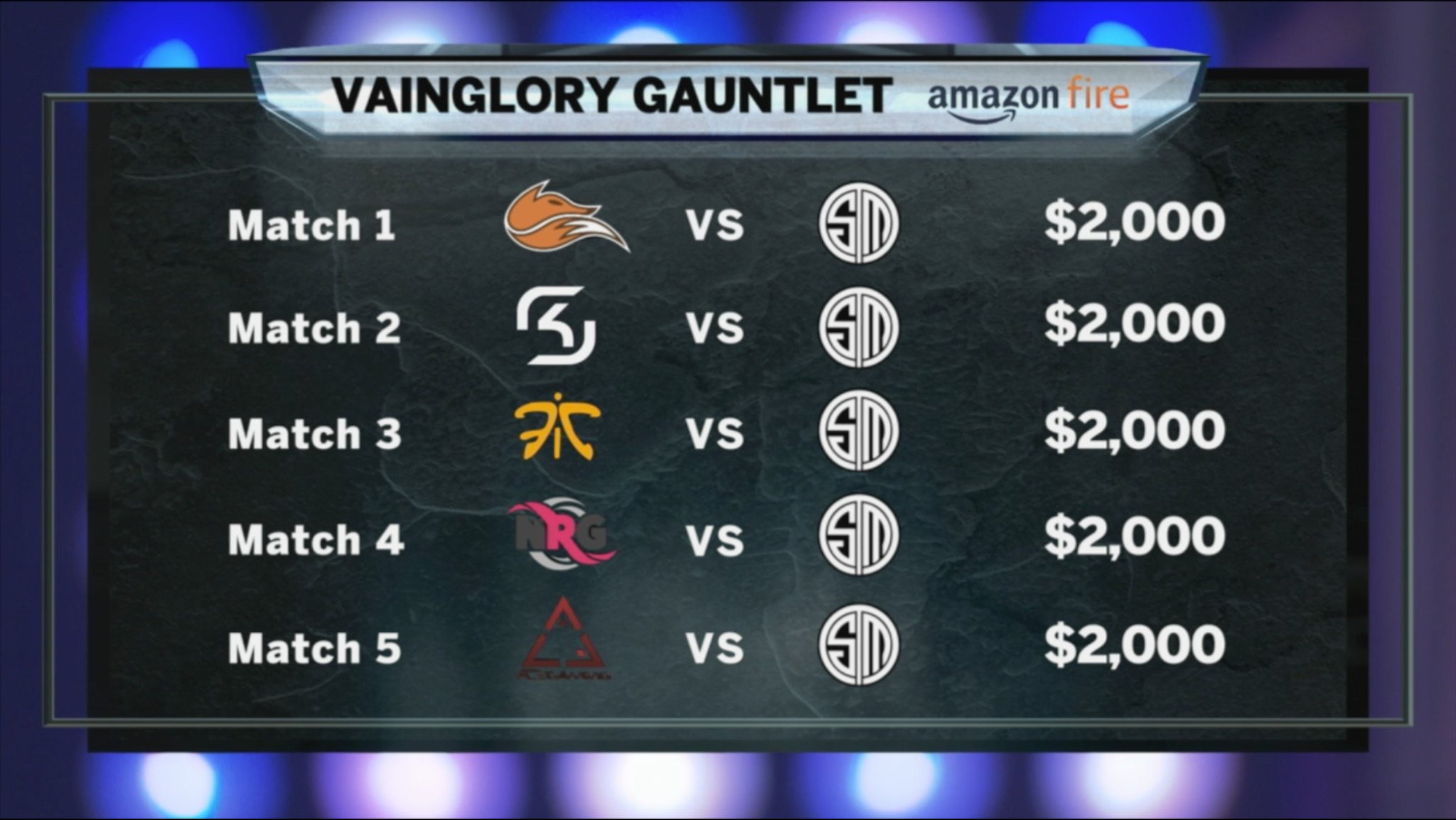 This weekend we take a break from Vainglory8 action and move to Mobile Masters! Mobile Masters is a unique tournament which brings together different competitive mobile games, including: World of Tanks: Blitz, Power Rangers: Legacy Wars and Vainglory. It’s a large event that is sponsored by Amazon, held in Las Vegas, Nevada. At Mobile Masters, the Vainglory tournament is held in two different parts. Read on for the tournament format and full coverage of the action that went down!

The tournament has two parts, the first being Run the Gauntlet; the second being a round-robin. For those who are new to a Run the Gauntlet style, we will give a basic overview of how it works. The concept is fairly simple: One team (this weekend the runner is TSM) attempts to win a series of best-of-one series against each challenger team. If a challenger defeats the runner, the challenger team then takes the runner’s spot and attempts to finish the gauntlet. In the first half of the day, we saw TSM attempt to run the Gauntlet against teams from all over the world. The challengers, in order, were:

The first four matches of the day posed no drastic threat to TSM. While the four challengers fought valiantly, TSM’s synergy and experience was able to triumph. The final game against ACE gaming posed the largest obstacle for TSM. EA teams are well known for their aggressive style and outstanding performance in teamfights. After Phoenix Armada rolled through the World Championships, this matchup was going to show how far NA has come over the last nine months. At the end of the match, no turrets were left on the Fold, but TSM was able to successfully Run the Gauntlet—defeating ACE. TSM is the first team to successfully Run the full Gauntlet out of three attempts by different teams. These matches provided much more familiarity for NA fans. The two other teams that had previously attempted the Gauntlet tournament were Cloud9, the split one NA winner, and Rogue, the split one runner-up. These teams are very acquainted, and have heaps of experience facing each other. The first game was played between Rogue and Cloud9. Rogue was able to take the game, showing that they do what have it takes to be in the conversation with the highest tier of NA teams. Following this game, TSM took the stage again to face Rogue. TSM was able to carry their momentum from the Gauntlet to the round-robin, going on to defeat both Rogue and Cloud9 to claim the championship title.

As a note: Even though the majority of players are now officially on patch 2.9, competitive play is still being occurring on patch 2.8.

This weekend, the most picked hero was Reim with 6, followed closely by Grace and Lance with 5 each. Catherine per usual racked up the most bans with 8, which meant she did not get picked or make it through draft once this weekend. Since TSM played the most games, they stuck to mostly picks that they were comfortable with. One notable pick was the WP Adagio on BestChuckNA to defeat ACE.

This weekend’s MVP goes to TSM’s FlashX. While all three members of TSM played extremely well this weekend, FlashX, with his thoughts of retirement and being challenged weekly for his spot to play, was able to stay extremely poised in the face of stiff competition. His performance this weekend showcased his experience in the Vainglory competitive scene.

This weekend was a great way for Vainglory to gain more exposure to a wider audience. The tournament style, while possibly not the best true gauge of each teams’ skill level, is action-packed and kept the viewers intrigued. One notable Vainglory Esports bit of news to add: In the Spring Unified Live Championship, Cloud9 attributed a lot of their success to their analyst and draft prepper physiX. For the Summer Season, she left the team to work, as well as play, in SEA for Mouz eSports in EU. She tweeted out Sunday that she would be rejoining Cloud9 through Worlds at the end of the season.

This weekend, Split 2 of the Autumn Season kicks off with a fabled series: TSM squaring off against Cloud9. Catch the action on Vainglory’s Stream starting at 2PM PDT (5PM EDT)!

Codes of the Fold Volume 2: The Unwritten Laws of Vainglory