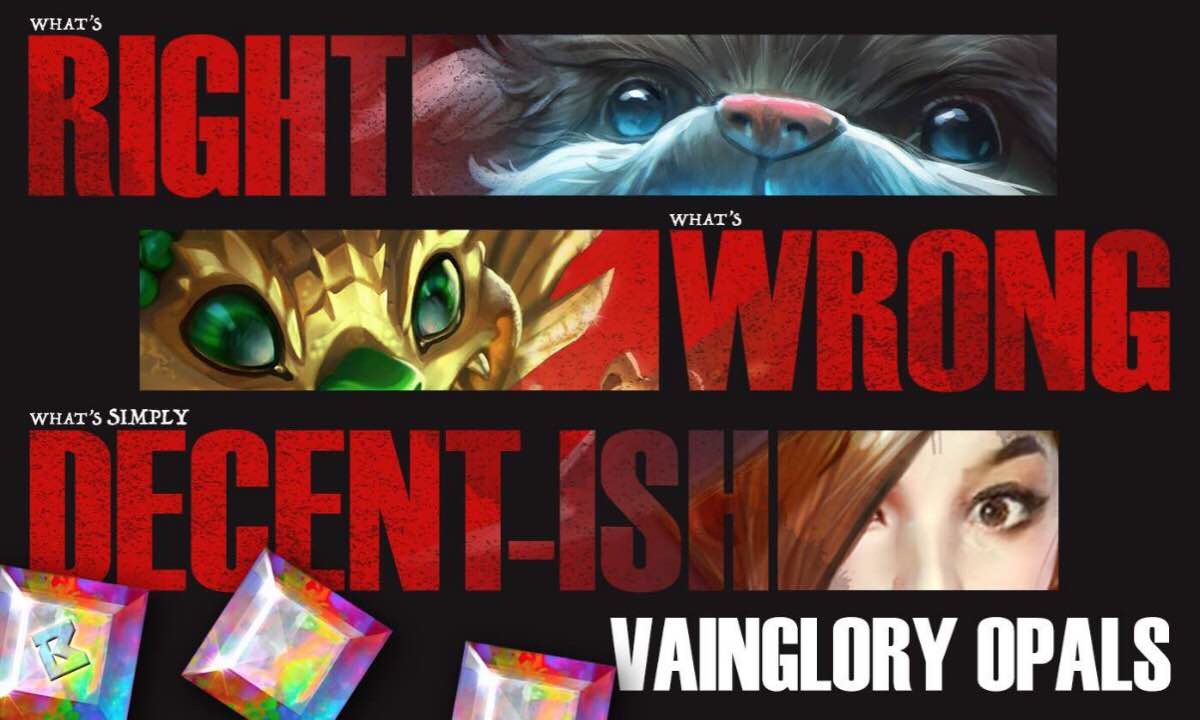 Opals. Love ‘em or hate ‘em, we have had Opals in Vainglory for over a year now. First introduced in September of 2016, Opals are a currency that allow players to purchase Special Edition skins from previous seasons. I was most excited about the chance to get the Summer Party Phinn skin, which had originally only be given to players who attended the Live Championships in 2016 or visited booths at Gamescon or PAX West. Opals were a chance for me to earn one of the coolest skins at the time, but what have they become today? Let’s take a look at what’s great and not so great about Opals in Vainglory. As I mentioned above, I thought Opals were great and still are a great way to have access to Special Edition skins. Special Edition skins have been released throughout the seasons or with special events like Summer Party Phinn. Normally, players who are F2P would not have access to these skins as you cannot craft them. A player can only buy them with ICE during the season that they are available. Once the season is over, players can no longer buy them with ICE, but the skins become purchasable for Opals.

Creating Opals was a good way for SEMC to make Special Edition skins more available to players. Whether they are free to play or they are just joining us on the advent of 5v5 (HYPE!), players can get access to some pretty awesome skins. Let’s be honest: Who doesn’t want a Bakuto Phinn skin? Although your best chances at collecting a lot of Opals lie in Rare Mystery chests (thanks Fierte), SEMC made Opal rewards a part of seasonal rewards and Daily Chests.

Speaking of Fierte, who wrote an excellent article discussing the drop rates of Mystery Chests, let’s take a look at how much Opals are worth.

From his article, Fierte gives us a common ground between dollars (USD), Glory and ICE based on the in-game systems. He then breaks down Mystery Chest drops rates that have been published by SEMC. In the end, he gives us the rates from each chest as $0.23 per Opal from Rare Mystery Chests and $0.35 per Opal from Epic Mystery Chests. Not a terrible price for Opals until we bring into light how much each Special Edition skin costs. For a 1000 Opal Golden Skaarf, we would be paying roughly $229.70, where the skin was originally released in a bundle with all 5 recolors for $50.

Now, of course the chests are not the only path to Opal riches. We can also grind them out through daily play. Taking a bit of anecdotal data from my F2P account, I have 125 Opals from about a month’s worth of playing. Casual here being 3-5 games a day and never maxing out the season rewards. 125 Opals we can safely assume is on the very low end of the output from daily grinding, but that still means 4 months of grinding for Bakuto Phinn or 8 months for 1 Golden Sparkler. At the time of this writing, a player would need 8350 Opals to purchase all of the Special Edition skins available for Opals. That is only over 5 ½ years of grinding.

To be fair, the Special Edition skins are supposed to be just that: Special Edition. F2P players will have to make sacrifices to save for their favorite skins, because in reality, they probably will never catch up to the continuing stream of Special Edition skins. To put things even more in perspective, I gave Ripkord (my streaming partner) $100 worth of ICE to spend on Epic Mystery chests for her birthday last year. She ended up with a lot of cool things and just over 1,500 Opals in the bank from repeat heroes / skins in chests. Players looking to grind Opals via Mystery Chests will still have to sink a decent amount of cash to collect them all.

The grind for Opals is the worst part of the system intended to help players. I think the system is fair in that regard. SEMC set out to reward players who are willing to spend money now, but still allow F2P access to the same rewards. That being said, not every Special Edition is mind blowing, but it is pretty hard to top SAW in floaties weilding a squirt gun. The Sparkler Skaarf set seemed a bit like a money grab, but I can see how SEMC wanted to give players the choice of their favorite color. Speaking of skins, we can say that not every skin is amazing and some people may like certain skins more than I do because it is just an opinion. My tastes may not be the same as yours, but I think we can agree some of the Legendary Skins are cooler than Bakuto Ringo.

Finally, we are left with a third currency in Vainglory. A currency that is only useful to some. As an avid SEMC fan / completionist, I have collected all the skins upon release. Now players like myself are left with a currency that we have no use for. Currently, players cannot exchange their excess Opals for ICE, like they can exchange ICE for Glory. With the Golden Ticket chest, I have hope that SEMC will introduce another use for Opals. For Ripkord, the chest was a way to use 2,000 (from other chests in addition to the initial sum) and not get a Golden Ticket. For me, it was a way to purchase a Golden Ticket for 5v5 with 100 Opals. What I am more hopeful for is the possibilities in the future for Opals.

In the past, SEMC found a new use for the excessive amounts of Glory players had in the form of Talents. Talents may not be for you, but at least now you can spend your Glory on something meaningful. In that regard, I am hopeful that SEMC will provide a new avenue to spend Opals. Perhaps, players will be able to purchase Talent Coin chests with Opals or even spend them on an upgraded Skin chest. Who knows what could happen, but the possibilities are endless and that keeps me hopeful that Opals will serve more than just one purpose.

As this article began, Opals are here to stay for the foreseeable future. They serve a purpose for one player base, but I hope we can extend their functionality as Vainglory grows. Some final advice, use the Rare Mystery chests instead of the Epic Mystery chests to grind Opals. What are your thoughts on Opals? Do the drop rates seem fair during daily grinding? Let us know in a comment below.