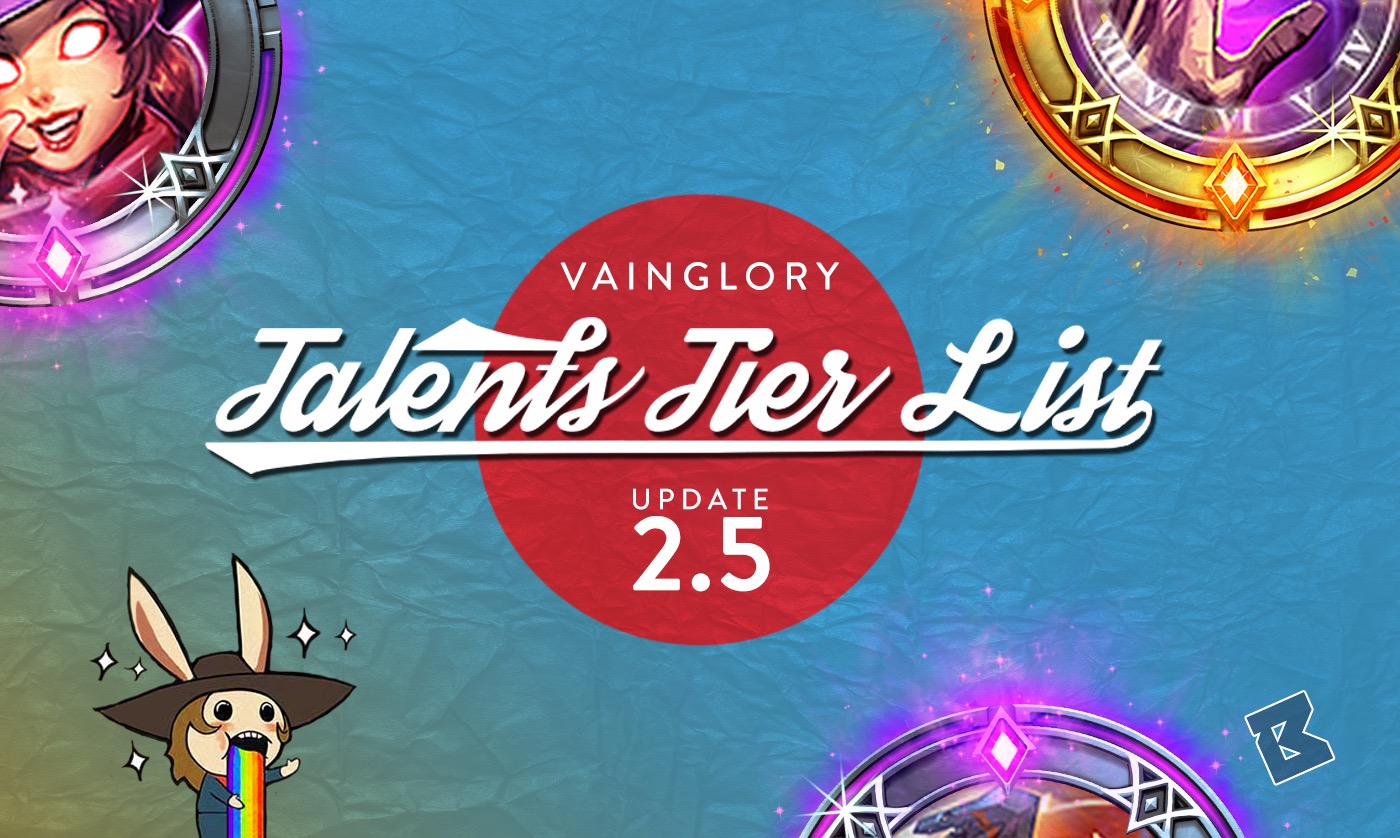 Vainglory has recently released a new system of upgradable skills for heroes in BRAWL modes, known as Talents. There are currently 96 talents, with each hero having a Rare, Epic and Legendary talent. For our Vainglory Talents Tier List, we’ll be taking a look at the top 30 hero talents for Update 2.5. Selecting the most effective talent for a hero can be difficult, and that’s why we’re here to help!

1. Idris (R) Path of the Seeker: Idris’ Divergent Paths become one with this talent. A major drawback of Idris is that he cannot gain both bonuses from his perk without sacrificing much needed damage. Not only does this talent rectify that issue, but it also boosts his passive weapon and crystal power. Being able to access both perk bonuses as a talent by itself would’ve already made for a stellar choice. When you combine that and the bonus weapon and crystal power, you can see why this talent is a cut above the rest.
2. Glaive (E) Stunning Bloodsong: Giving up a meager amount of damage, Bloodsong gains access to a shorter cooldown and a stun. Glaive was already a force to be reckoned with in BRAWL, but with a shiny new low cooldown and AoE stun under his belt, Glaive becomes an absolute menace to the Fold. Make sure to take care where you position yourself, or else you’ll find yourself chain stunned by a lone Glaive with this truly “Epic” talent.
3. Samuel (L) Viscous Darkness: Tapping into the deepest recesses of his nonexistent soul, Samuel has trained his best friend, Drifting Darkness, to become more vicious with his Legendary talent. By granting a heal, slower cloud movement, increased duration as well as slowing enemies within its radius, the collective suffering caused by Samuel’s new and improved darkness fuels him. A remarkable talent through and through!
4. Gwen (E) Skedaddling: Who thought running away would be a good talent—and a really good one at that. Gwen’s proficiency at Skedaddling has allowed her to sprint for a longer period of time, gain passive weapon power and activate Skedaddle more often. A skedazzling excellent talent.
5. SAW (E) Speedy Spin Up: Gaining movement speed from Spin Up stacks instead of losing it has long since been a dream of all SAW enthusiasts out there, such as Jaipete and Xelciar. This talent completely eliminates one of SAW’s major drawbacks and spins it up into a major advantage.
6. Lyra (E) Mobile Bulwark: Lyra takes zoning to a whole new level. Gaining extra crystal power passively as well as upgrading to a new Bulwark M7 (2017)™, she cruises the battlefield, snaring heroes left and right. With talents adding greater gap closing abilities to many heroes, the mobility and extra duration on her Bulwark is a direct counter to the ones that do add or improve dashes.
7. Flicker (E) Binding Dust: Gaining a speed boost as well as having a second root through his Fairy Dust, the amount of opportunities Flicker is able to create now is staggering. Crickets everywhere are cowering in fear at Flicker’s newfound ability to root enemies in such a large area.
8. Kestrel (L) Piercing Shot: No longer will your perfectly executed snipes be blocked by the target’s overprotective allies, as this talent takes the thud out of Kestrel’s twang and whistle. Passing through multiple targets would earn this talent a top spot by its own, but the increased damage and lowered cooldown absolutely guarantees Piercing Shot a high ranking.
9. Taka (R) Ranged Kaiten: Many players observed how dangerous a ranged Kaiten would be when SEMC accidentally released a sneak peek for it in a prior update. No one thought that the slippery assassin could become even more so, but with an invisibility mechanism, gap closer and invulnerability, it’s tough to peg him down. Gaining not only range, but damage as well, Taka’s Rare talent flips its way into the top ten.
10. Lyra (L) Gythian Ward: Becoming the ultimate tool of utility, Lyra opted for a more environmentally friendly Bulwark with this Legendary talent. Bright Bulwark grants a small barrier and cleanses all debuffs to allies within its perimeter. Being the only skill to cleanse ally debuffs, this talent is very powerful.

11. Skye (R) Enhanced Thrusters: Skye thought her thrusters could use a little tune-up, so she added a nice movement speed bonus after executing a Suri Strike, as well as a passive crystal power bonus. With her new and improved exosuit, Skye strikes fear into her foes with harder hitting missiles and newfound mobility.
12. Koshka (L) Splashy Play Time: Seeing how much fun one person could have in a “Yummy Catnip Frenzy,” Koshka decided to spread the love to anyone (un)fortunate enough to be in the vicinity of her primary target. While also boasting a shorter cooldown, Koshka is capable of locking down entire teams, should they clump up, which buys her allies ample time to follow up after casting her ultimate.
13. Baron (L) Trion Cannon: Exchanging quality for quantity, Baron gains a lower cooldown and two additional charges for his Ion Cannon. The true shine of this talent comes from the bonus attack range Baron gains access to through Trion cannon, which transforms weapon Baron into a greater force to be reckoned with.
14. Koshka (R) Frenzied: This talent revisits Koshka’s old heroic perk mechanic by refunding a percentage of each of her ability’s cooldown upon landing a basic attack. Though this sacrifices damage, it allows Koshka to become even more sticky and gain access to more empowered auto attacks—which is a worthy trade-off that pays dividends to the lovable catastrophe.
15. Grumpjaw (L) Big Appetite: This talent erases an effective counter for Grumpjaw’s “Stuffed” ultimate; accompanying that is a duration increase for it as well. Getting swallowed by Grumpjaw with a large hunger will likely spell the end for anyone unfortunate enough to get caught between his teeth.
16. Fortress (E) Critical Wounds: Fortress has always been known for his game-changing ultimate. This talents provides an increased critical chance for each wolf present on the battlefield as well as passive critical damage. Even crystal carry Fortress will taste the noticeable benefit, as the almost guaranteed critical chance from having three wolves up will surely leave multiple marks on his enemies.
17. Blackfeather (E) Point Guard: Advanced fencing lessons took one of Blackfeather’s strengths, his barrier, and spread the love to all nearby allies on a relatively low cooldown. With a newly increased barrier strength to boot, the allies of a Blackfeather sporting this talent will feel safe quite often.
18. Vox (R) Deep Dash: Deep Dash pays homage to the infamous Spring 2015 Vox by undoing the change to his Sonic Zoom and granting Vox passive attack speed. Plus, increased dash range, making it a jammin’ talent.
19. Phinn (E) Phaster: With a mighty phast stomp, Polite Company now grants a temporarily movement speed bonus to Phinn and his allies upon activation. While having that inherent pull and fortified health bonus, initiating a movement speed boost adds a nasty amount of utility to Phinn’s Polite Company.
20. Samuel (R) Power Siphon: Samuel’s perk heals for a higher amount and is up more often; a talent that is simple, yet very effective all at the same time.

21. Alpha (R) Core Overclock: Core Overclock grants boosts to Alpha through an increased attack speed per stack as well as a passive weapon boost. It’s not one of the flashier talents, but the effects it’ll have will definitely make you do a double take.
22. Ardan (R) Vanguardian: Vanguardian removes the drawback of having a smaller barrier upon self-cast, deals more damage and has a stronger barrier, but at the cost of a higher cooldown. While the cooldown increase may throw some Ardan players off a bit, the other upgrades makes this talent a fine one.
23. Phinn (L) Raid Boss: Initially, Raid Boss is one of those talents that has an immediate wow factor to it, taking Phinn’s survivability up to 11 while taxing his damage. Although he can still provide lots of utility through his abilities, and avoid Aces much more easily in Battle Royale, his damage can simply be neglected while you focus on objectives.
24. Reim (E) Long Winter: Winter is here to stay with Reim’s Epic talent. Long Winter allows Reim to have fortified health on demand, so long as he keeps it up. It also boasts a sufficient passive increase in crystal power in order for Reim to easily help his enemies chill out.
25. Blackfeather (L) Elusiveness: Rose Offensive loses some damage in favor of two extra charges and a lower cooldown. Often times, Rose Offensive is used not for its damage, but for the temporary invulnerability as well as for closing the gap. Blackfeather players will find having it more frequently very useful.
26. Baron (E) Endless Mortars: While it does deal less damage, the mortars are on a short enough cooldown to be used as a very effective zoning tool. Steering away from all the mortars coming from a Baron with this talent is basically its own mini-game.
27. Petal (R) Bouncer: A talent that is often seen as an underdog. While it does tax Petal’s energy pool when used carelessly, having a more frequent hop can be a godsend while chasing and escaping. It’s also useful for tapping into the damage amp more frequently.
28. Blackfeather (R) Hummingbird Heart: An increased duration of his heroic perk as well as passive boosts to his attack speed and weapon power may seem minor at first. Rest assured, you’ll definitely feel the effects of this talent once they hit you as Blackfeather proves, yet again, that looks can be deceiving.
29. Skye (L) Piercing Barrage: Skye’s Forward Barrage cuts through everything in its path while sacrificing a percentage of damage. Having her barrage body blocked is problematic, and the damage loss doesn’t always compensate for the pierce. However, this talent can still be very deadly if you let your guard down and get complacent about how you and your team are positioned.
30. Joule (E) Backup Button: It’s always nice to have a backup plan, even if it deals less damage. With Echo, the fantasy of having 4 Big Red Button casts can now be realized.

Vox (L) Echo Chamber: Double the bounces, double the fun; less damage, though…
Gwen (R) Speed Loader: This talent helps Gwen widen the gap from aggressors more easily, or poke an extra time if she so desires.
Ringo (L) Spiked Brew: Naturally, when your brew is spiked, you should share it with your friend that’s closest to you!
Fortress (R) Longtooth: A better grill provides nice boosts all around as well as a useful 2.5 range increase.
Krul (E) Healing Smite: It’s always nice when your undead friend shares some of the life he has stolen with you. Too bad you’ll have to be near him for that.
Samuel (E) Unwaking Nightmare: Don’t sleep on this talent—we won’t be able to wake you up!

Flex Your Might: Vainglory Flex Picks and When to Use Them