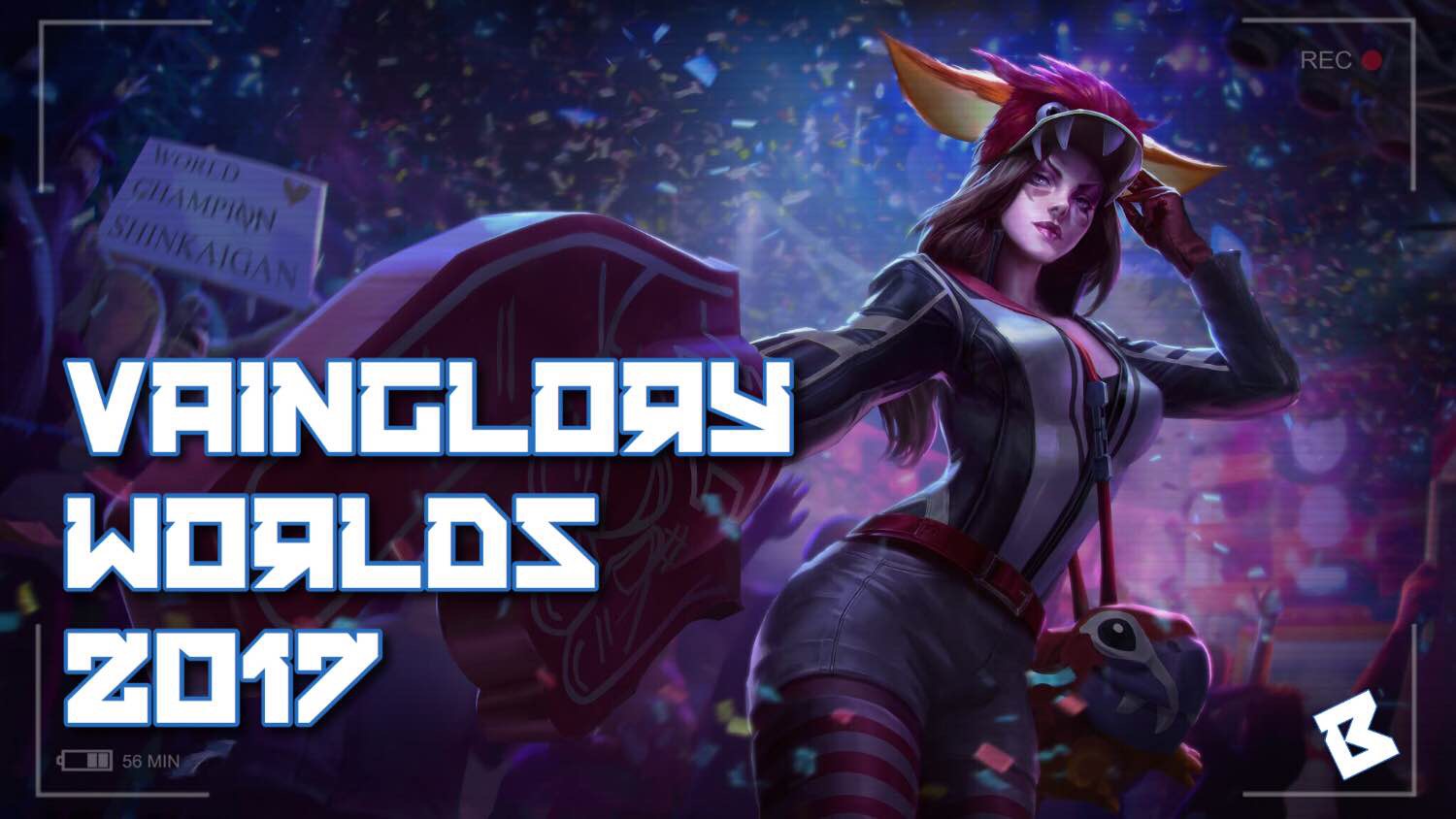 The 2017 World Championships provided Vainglory viewers across the globe with intense action, exciting reveals, and an overall amazing weekend. This year’s event was held at the Kallang Theatre in Singapore. While this time frame provided some viewing challenges for individuals in NA, EU, and SA regions, the location for players was nothing short of breathtaking. Fans were treated to four full days of Vainglory — an extension from last year’s three days of competition. Keep reading for a breakdown of each stage’s action, and coverage of other major topics from the weekend!

For a more in-depth review of each day, take a look at the individual day recaps linked below.

The group stages took place mostly on Day 1, with two series being held at the very beginning of Day 2. The group stage was formatted as a round-robin, two game series within each group. The draw for groups occurred weeks ago, after the conclusion of the Autumn Season’s Vainglory8. In each group, there could be no more than one team from each represented region. These matches were very intense and separated the top teams from the rest of the pack. There were also two major upsets that occured in this part of the weekend. Both TSM and ROX Armada, the two teams who battled in the finals at the 2016 World Championships, were knocked out in this stage. This showed how much the competition has improved over just one year of time. Standings after Day 1. Hunters was the second team to move on from Group D.

At this stage of the competition, there was still at least one team from each region represented. Day 2 showed that the widely regarded favorite, ACE Gaming, was able to be beaten, with paiN Gaming (formerly Red Candids) taking the series to 5 games and had a distinct chance to win the series. Both NA teams that made it to Day 2 won their series to move on to the semifinals. The fourth team to qualify for their spot in semifinals was Impunity, the home team and crowd favorite. All four of the teams who were knocked out in this stage performed well, with all of them greatly exceeding expectations.

Day 3 brought NA action to a head as Cloud9 and Tribe Gaming squared off. The winner of this series would be the favorite going into the finals. Tribe, the wild card selection from NA, went on to take the series 3-1. Emotions ran high after the loss for Cloud9; not only for their players on stage, but also for other members of their team at the event. This shows how dominant the NA region has become after taking three teams to Worlds, and another team (Rogue) who had the results to vie for a spot as well. In the second series of the day, ACE Gaming defeated Impunity, the crowd favorite, 3-1 as well. This series started to showcase the talent that ACE brought to the competition. Impunity proved that they will be a team to be reckoned with in the future, as their roster is still young and growing.

In the finals, Tribe Gaming showed why they have become the best team in the world. They went from being acquired by a new organization at the beginning of the Autumn Season to World Champions almost overnight. They were able to win the series against ACE 4-1 in commanding fashion, looking dominant in their playstyle that no other team could come close to touching them. Tribe’s roster was put together after the model Cloud9 used during last year’s World Championship. DNZio and ttigers, two established star players, were paired with the young and also experienced talent MaxGreen to create a superteam. Over the off-season, they will continue to grow and strengthen their position as the best Vainglory team in the world! This year, one of the stark differences from last year was the competitive depth of teams coming in. Last year, there were a few dominant teams that held the whole tournament in their grasp. On the other hand, this year, there were teams from all regions that played exceptionally well. Two of the major teams that performed better than expected were G2 (EU) and paiN Gaming (SA). These were two regions unexpected to make it out of group stages, but played well; not only here, but also in the quarterfinals — both falling to eventual finalists. China was another region represented, and will continue to prosper over the coming years. All of the teams who earned their spots at Worlds played very well, and we look forward to seeing how they will grow leading up to the 2018 World Championships.

Throughout the weekend, as viewers were watching the stream, they may have noticed that the analyst desk was utilizing detailed stats from each match. These were provided by VGPRO — one of the leaders, among others, in using the Vainglory API. They were able to provide stats to help viewers better understand how teams play and what may have been the tipping point in a match. In house at Broken Myth, we also kept track of the draft stats for every match over the course of the four day event. Check out the full spreadsheet for exclusive stats organized by group, region, event day, and more!

One of the shortcomings of Worlds 2017 was the production quality early on. Both the first and second days were plagued with delays. By day three and four, these issues were worked out and production ran much smoother. This was due to a tireless effort put forth by SEMC staff to fix the issues to provide viewers the best experience possible. This event was streamed live on three different platforms for NA and EU; Twitch, YouTube, and Facebook Live; while international broadcasts also took place in multiple different languages.

The talent section of the crew included many familiar faces to those who routinely watch Vainglory8 and other live events. Two beloved staff were welcomed back — Action Jackson (AJ) and SuiJeneris (SuiJ). These casters, analysts, and MC’s are just as important to providing an excellent event as the teams themselves; often times not receiving much of the credit that they deserve for the hard work they put in. The highlight of the weekend for most viewers was the unveiling of the new 5V5 game mode that will be in full release as of February 2018. The reveal was almost an event within the event itself with three matches showcased. The first with PBE testers, featuring our own site lead, Sean! Following this, there were two matches played by professional players from the teams Renegades, ROX Armada, Detonation Gaming, and TSM — who was joined by SEMC employee and previous world champion ShinKaigan. Interspersed between these matches were interviews with several different key department individuals at SEMC, which helped viewers understand the new game mode better. They also announced the introduction of “Golden Tickets!” These rare commodities (which do not come with unlimited chocolate) will grant early access to players who will be able to play the new game mode before 5V5 is in full release, starting in Update 2.12.

The 2017 World Championships was an amazing event that showcased the best talent at the highest levels of Vainglory. It was a long four days, especially for the NA fans who stayed up through multiple nights to watch the action. It’s sad to see the 2017 competitive Vainglory scene come to a close, but it thrives with the promise of 5V5 on the horizon and another year of competition in 2018. For now, we wish all of our readers a Happy Holidays and look forward to seeing you in the New Year!