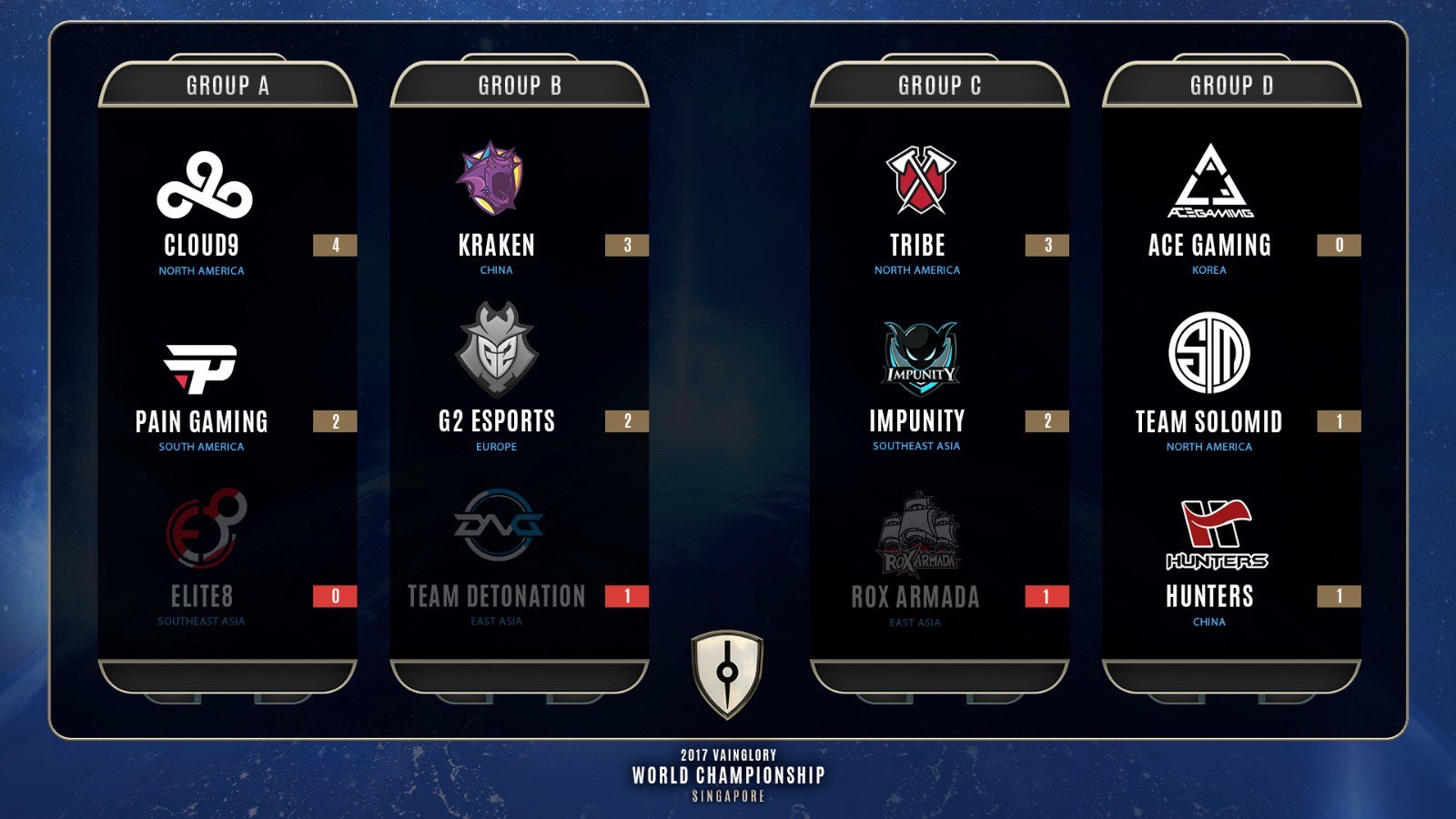 Worlds 2017 got off to a fast start … not really. Two separate delays pushed the first match of the day on the main stream back until 11:20PM PST, when production moved the second game of the Cloud9 vs. paiN Gaming series to the main broadcast.

Vainglory Worlds 2017 Day 1 showcased an anomaly of unexpected results. Impunity, the only local team of the tournament, caused a bracket upset by defeating ROX Armada; leaving less than 3% of player brackets still accurate — also providing a possibility for PlayoffBeard to shave his face live on air. Most surprisingly, EU advanced to Day 2, being represented by G2 Esports. Broken Myth is here to recap Vainglory Worlds 2017 each day so you don’t miss a blink of action!

Seen below were the match-ups for Day 1 action. The times and order of the matches have been rearranged due to the broadcast delays. Beyond the technical issues that plagued the beginning of the event, there were many outstanding series. Cloud9 kicked the day off with a clean 2-0 series against paiN Gaming. Team Kraken, the China team last to qualify for Worlds, was the first team to secure a spot at Day 2 — exceeding viewer expectations. From NA, both TSM and Tribe dropped one of their first two games. In a shocking upset in Group C, reigning champion ROX Armada was eliminated by the only local team of the tournament, Impunity.

Following this, Cloud9 achieved a first place spot in Group A with a win over Elite8. paiN Gaming was able to follow in Cloud9’s footsteps to also defeat Elite8. This win meant that both EU and SA saw their one and only teams move on to the second day of competition. The last two series of the day were pushed back to the beginning of Day 2 from initial stream delays.

This is a small portion of the stats that were taken for Day 1. Broken Myth will be updating a full stat sheet in real time during Vainglory Worlds 2017! Keep it on tab to track hero stats broken down by group, region, and totals for the day.

At the end of the long first run, PlayoffBeard and FooJee tweeted apologies for the numerous technical issues that headlined Day 1. Both promised an extreme improvement over the course of the next three tournament days.

Amidst the delays, the latter Group D matches were moved to the beginning of Day 2 action. Subsequently, these matches will occur at 6PM PST, and the broadcast start time for Day 2 has been moved back slightly to 9:15PM PST. Catch the action on Vainglory’s streams for an improved second day, or check back tomorrow on Broken Myth for your daily recap!

An Early Look at Vainglory’s New Hero Varya in Update 2.11