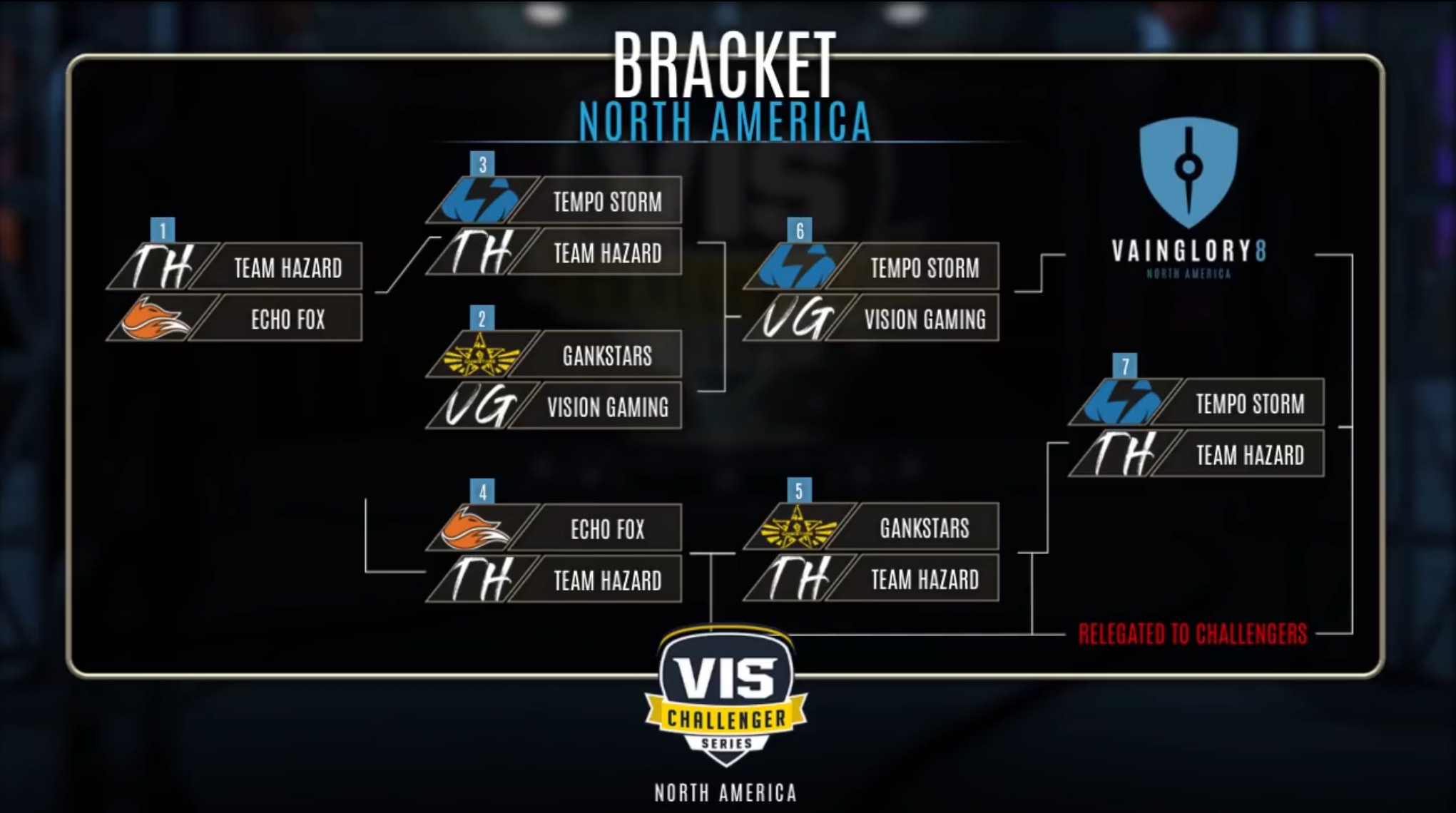 Vainglory8 Autumn Challenger Battles this week saw the rise of two new teams, along with several recognizable faces that have been mainstays in Vainglory’s competitive scene. The two teams facing relegation from NA Vainglory8 were GankStars and Tempo Storm. The three challenger teams from the Vainglory Challenger Series (VIS) were Vision Gaming, Team Hazard, and Echo Fox. These three teams this past season separated themselves from the rest of the VIS field. Read on to find out about this past weekends Vainglory8 Autumn Challenger Battles!

The format of Challenge Battles has been an evolving system over the past several seasons. This season there was only one set of Challenger Battles that took place. Previously, they were held between splits as well as at the end of each season. Another change from last season was the shift from a round-robin format to a double elimination bracket. Lastly, in former seasons, three teams from Vainglory8 faced relegation. This season, only the two lowest scoring teams had the possibility of being relegated.

The first of four days of Challenge Battle action kicked off with Team Hazard taking on Echo Fox. These teams were the second and third seed coming out of VIS. The games in the first two days were best of three series. Team Hazard was able to take care of business, defeating Echo Fox 2-0 — sending them to the losers side of the bracket. In the second series of the day Vision Gaming went up against GankStars. Vision Gaming took the first game, with GankStars tying the series in the second game. Vision Gaming took the third game to win the series 2-1. This victory moved them to winners bracket and a bye until Sunday.

Friday was a disappointing day for the Challenger Battles. Team Hazard, due to a scheduling conflict outside of the game, had to forfeit their series against Tempo Storm. This moved Tempo Storm to face Vision Gaming on Sunday and Team Hazard into a rematch of Thursday’s series with Echo Fox.

In a change from the weekday matches, all weekend games were played as a best of five series. The weekend kicked off much the same as Thursday with Team Hazard taking a decisive 3-0 victory over Echo Fox. This loss moved Echo Fox back into the Challenger Series for the Spring Season. Team Hazard had to then turn around to take on GankStars in an attempt to keep their Vainglory8 dreams alive. After the first two games the series was tied 1-1. Hazard then went on to take the next two games to claim the series. GankStars’ loss relegated them to the Challenger Series, ending the run of the first esports organization that started in Vainglory. In the coming seasons, they will regroup and come back stronger than ever!

Entering Sunday there was only three teams left alive to claim the two spots in North American Vainglory8. Tempo Storm and Vision Gaming both found themselves in the upper portion of the bracket, giving them each two shots to make Vainglory8. The last team, Hazard, was in the loser side of the bracket after forfeiting their matches on Friday. The day started with Tempo Storm and Vision Gaming facing off in a best of five series. Vision jumped to an early lead taking the first game. Riding the momentum, they followed through in game two, going up 2-0 in the series. Afterward, Tempo Storm rallied to take the next two games and tie up the series; however, Tempo Storm was unable to complete the reverse sweep of the series. Vision Gaming took the final game of the series to claim the first Vainglory8 spot of the weekend. In the final series of the weekend, Tempo Storm folded again to Team Hazard, this time in a clean 3-0 sweep. This victory gave both of the Vainglory8 spots to challenger teams.

This week I wanted to stray from my traditional style of picks and bans to give readers a graphic, that includes a full range of information rather than handpicked stats. In the aftermath of Challenge Battles, we are seeing Vainglory in an awkward spot. Several of their franchise teams in both Europe and North America are no longer in Vainglory8. GankStars, one of the longest and storied teams in Vainglory, has been relegated. Tempo Storm recently announced that they will be taking a step back from Vainglory to focus on other esports. In both regions there were forfeits for different reasons.

On the other hand, Vainglory has the 2017 World Championships coming up early December. This will showcase talent from around the world at the very highest level, and mark the live reveal of 5v5. There are still many questions to be answered about this new game mode, with sneak peeks and hints coming throughout the next month leading up to Worlds. Be on the lookout for exclusive Worlds and 5v5 coverage on Broken Myth!