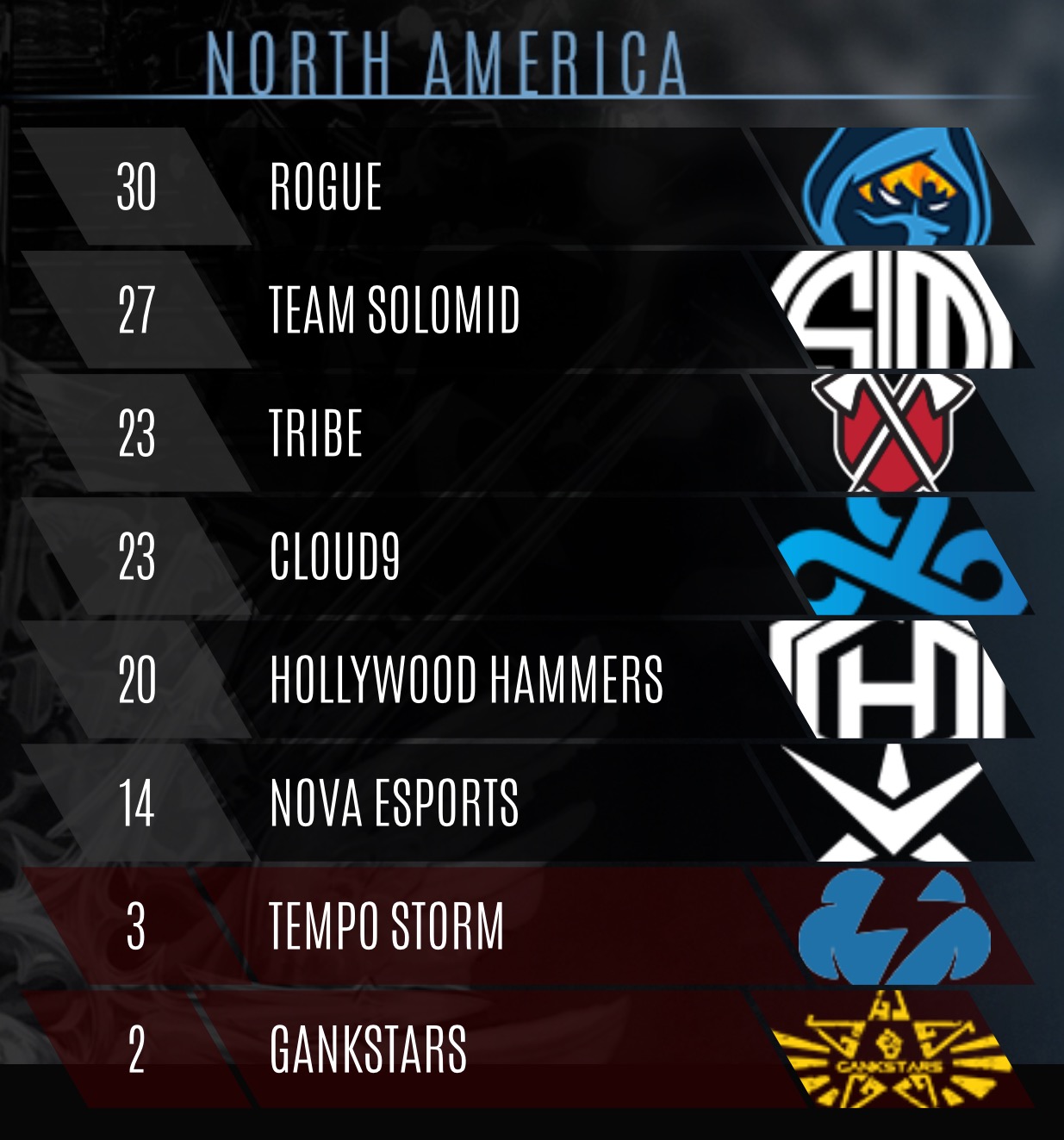 As we come into the last two weeks of Autumn season, there is still one spot at large in NA for the World Championship. With several teams eliminated from contention, the race at the top is still very tight to close out the season. This week we saw a team play to their lineup’s potential after having a relatively mediocre season. Read on to catch up on the action you missed this past week in Vainglory8!

The first day of action kicked off with Cloud9 facing TSM. While this matchup was decided in favor of TSM 2-0, both of these teams felt slightly lackluster in comparison to their performances in previous weeks. The second match pitted Hollywood Hammers against Rogue. Hammers was able to take the first game, but dropped the following two matches to give the series to Rogue 2-1. In the wake of this matchup, the shakiness of the Hammers’ roster was on full display on social media. In the offline series of the week, we saw Tempo Storm and GankStars in a battle to avoid being at the very bottom of the standings. Tempo Storm took the series 2-1 in a close matchup. Tribe Gaming took on NOVA eSports in the last series of the day. After a slow start to game one, Tribe was able to rebound and take the series 2-0; moving them forward to day two.

Day two kicked off after being delayed shortly, with the EU Vainglory8 running slightly overtime with some amazing matches, which you can watch on Vainglory’s Twitch. However, NA was able to start with Tribe and TSM taking over the Halcyon Fold. Tribe again showed the potential their lineup has held all season, taking down TSM 2-0 in commanding fashion. TSM for the second day looked somewhat flat after their resurgence earlier this season. Tribe, on the other hand, is heating up when it counts most. Tempo Storm reached the second day for the first time this season and had to battle it out with Rogue — the current points leader this season. While able to take one game in the series, Tempo Storm fell 2-1. In the third place matches TSM defeated Tempo Storm 2-0. The finals placed arguably the two hottest teams in NA against each other. While both games were action-packed, Tribe was victorious against Rogue ending 2-0.

Series of the Week: Tribe Gaming Vs. Rogue

This Series of the Week generally had the largest impact on the standings while several teams bid for a spot at the World Championship. In a fairly passive first game Tribe was able to, with the help of two large Kraken pushes, claim victory. In the second game, the two teams had amassed an equal amount of kills from the previous at just the 11-minute mark. With a 5-turret Kraken push, Tribe was then able to make a final push to destroy Rogue’s Vain crystal and win the series 2-0. The 2-0 victory by Tribe was able to statistically keep them alive for a spot at Worlds. Rogue was unable to put any extra space between them and TSM, who sits 3 points behind in the standings.

This week Alpha, Grace, and Rona led the pack — totaling 13 wins over 17 games. SAW also was given significant play time with teams seemingly not showing him the respect that he needed. Ardan has seen the most play this split, and is sitting at an exact 50% win percentage. Reim leads the way in the bans category, amassing 34 over this split alone.
Totals for this season so far are:

There has also only been one hero that has seen a 0% pick/ban rate. That would be Taka; Ringo joins him as the only hero to not achieve a single win this season.
*As a disclaimer, this does not include statistics from third place matches. This week saw NA’s World Championship picture become a little clearer as Hammers was statistically eliminated. It has prepared us for an incredible end to the Vainglory8 season with teams desperately fighting for the last spot at Worlds. Be sure to catch the action on Vainglory’s Stream this weekend! Week 4 for Split 2 in NA kicks off with Cloud9 taking on Rogue at 2PM PST (5PM EST). This will be the final week of action in Vainglory8 before the Challenger Battles finish off the Autumn 2017 Season!