Welcome to the Bungle 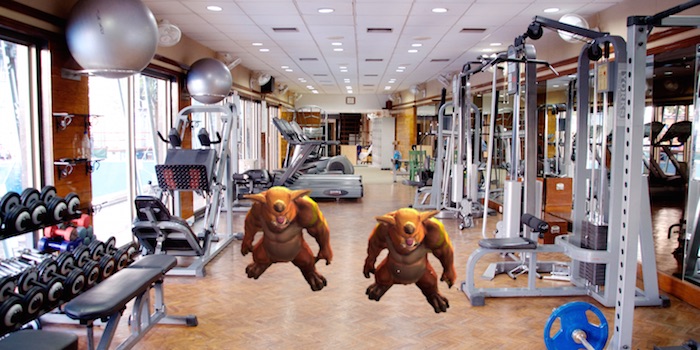 The Lunar New Year blooms throughout the jungle, casting warm tones that speak of celebration. Two little jungle creeps can be found in their usual spot by the shop. Jeff is spotting Marty on a bench press. A half dozen 45lb plates are stacked up on either side as Marty effortlessly pumps the bar up and down.

Marty– So I thought the new year already happened.

Jeff– This is the Lunar New year. It celebrates Chinese tradition with the cycles of the moon and each year rotates through a series of animals that represent them.

Marty– And Chinese is…

Jeff– Some culture that doesn’t exist in our world.

Marty– But it’s being celebrated here?

Marty– No thanks, my last few trips to the restroom have been cataclysmic.

Jeff– It’s worth it. This is our time now. No longer will those pompous jerks obliterate us in passing on their way to buy more stuff. They’re going to have to think twice before checking in at our Hotel California. Because if they do, they can check out anytime they like, but they’ll be dead.

Marty– I thought you shot down my idea for a B&B.

Jeff– It’s a song. The Hotel represents Hell. Nevermind, I think I hear him.

Marty hops to his feet and casually tosses the heavily weighted bar over his shoulder.

Jeff– Marty, this is serious.

Fortress leaps from the bushes with a joyful howl, pouncing on Jeff.

Jeff– Once more unto the breach!

Jeff and Marty rain blows on the wolf’s snout with reckless abandon. Fortress winces back, confusion peppering his feral eyes.

Jeff– Hey, Marty. I don’t think he likes that.

Jeff– I was being snide!

Marty dives back into the fight. Fortress attempts to return fire but is soon overwhelmed. With a final flurry, the hero lets out one last mournful cry and the creeps officially kill a hero for the first time in their otherwise trivial lives.

Jeff– Did you see that?

Jeff and Marty fumble through a very uncoordinated celebration as one tries to high five and the other fist bump.

Cocky Voice– What did you do?

Taka appears next to the body of Fortress.

Taka– You killed him!

Jeff– Isn’t that the point?

Skye barrels through the brush to the corpse of Fortress. Tears flow freely from her eyes when she sees he’s gone.

Vox, Kestrel and Phinn hear the commotion and come running. Gasps and shocked faces fill the crowd at the sight of the carnage. Kneeling down in her mech, Skye gently rubs Fortress’s belly.

Skye– One for the road, old friend.

Taka (to Jeff and Marty)- You two are disgusting.

Jeff– Everyone hold on here. First, this early in the game, he’s going to respawn like any second. (Fortress disappears) See? Second, our job is to attack you guys and it’s not our fault he didn’t get the memo that we’ve been working on improving ourselves so we’re not such pushovers.

Marty– And C, he was building crystal power (gestures to Taka and Skye) which is pretty bogus with two squishy carries.

Skye– Haven’t you watched any movie ever? You don’t kill the dog.

Skye– Fortress was special, and you might have seen that too if you weren’t so hung up on how many kills you’ve gotten.

Vox– Or how much gold his dead body was worth.

Kestrel– Even though he’s way more than a goat, I mean, way more, I would never stoop to to something like that.

Jeff (to Kestrel)- I saw you blast him with Glimmershots just a few minutes ago.

Kestrel– That was different.

Phinn– C’mon mate, don’t make a fool of yourself any further.

Jeff– This is preposterous! You maniacs slaughter us a billion times a day but we get one of you and we’re criminals?

Skye– You know what guys, obviously these two can’t see anything outside their little world, so let’s leave them to it. Don’t worry boys, no one is going to bother you for the rest of the match.

Vox– And probably every one after that once we tell the others.

Skye– Good idea, in honor of Fortress, you two don’t get to play anymore.

Fortress trots over to the group.

Kestrel– Yes, he is. In our hearts.

Marty– You know it. I’ll be the one rolling those nat 20s.

Vox (to Phinn)- What are you doing?

Phinn– What? This is work, I can have a life outside of here.

Everyone except Fortress leaves.  The dire wolf stares blankly at the creeps.

Jeff– If anything, this is your fault for not building defense.

Fortress walks to the edge of the creeps territory and lifts his leg.

Marty– I didn’t know that was a boy dog.

Vainglory Weekly News Round Up