All About Vainglory: Attack Speed 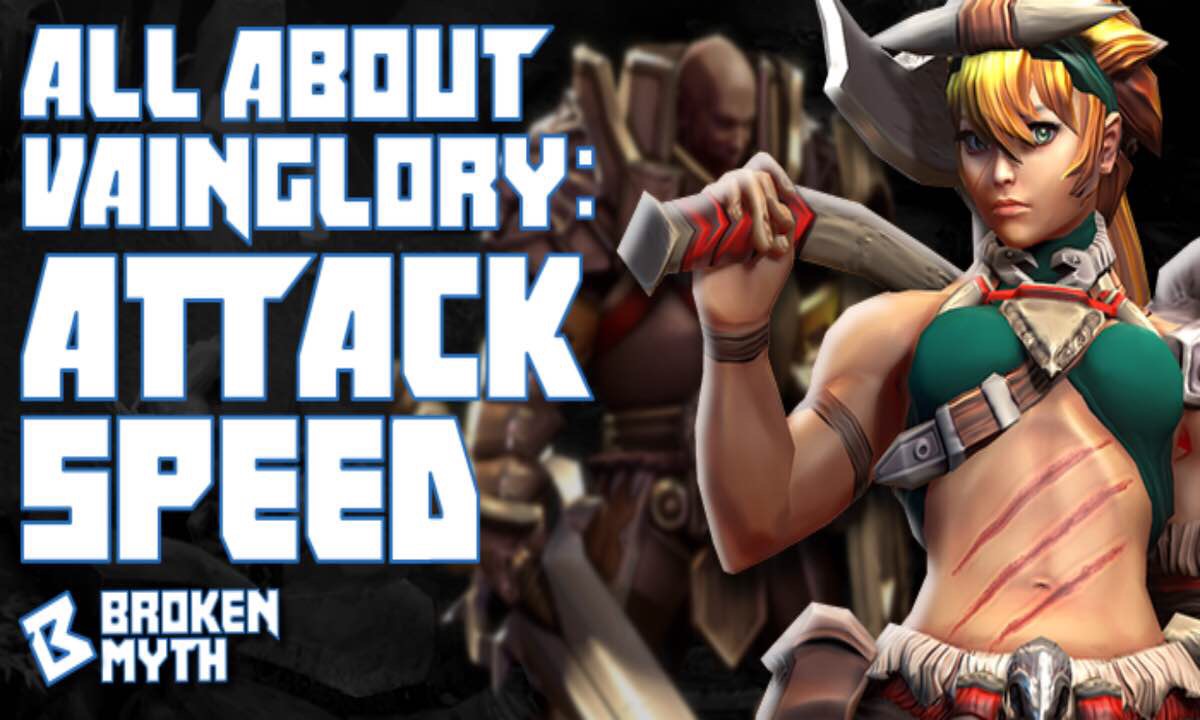 Attack speed is one of Vainglory’s most misinterpreted mechanics, even though it has existed ever since the dawn of the game. A lot of players assume that it represents the hero’s attack per second, but that is simply not true. This post aims to introduce players to attack speed, what it affects, and all things related to it.

Base attack time (BAT) is the time that separates consecutive basic attacks of a stable auto-attacking unit at 100% attack speed. It can be used to determine the number of attacks per second. As an example, a unit with 0.5s BAT can attack every 0.5s. The BAT of most heroes is 1.3s.

Here’s the formula for all you math geeks to calculate the base attack time of your hero:

Base attack time, the general term of the mechanic, is split into three parts.

Attack Cooldown
The time a hero has to wait after successfully basic attacking so that they can start the animation of another basic attack. The hero can move freely during this phase. The attack cooldown of most heroes is 0.8 seconds.

No Stutter-Step Penalty
The “wind down” timer of a basic attack. This timer cannot be cancelled through passive means such as commanding your hero simply to auto-attack. It must be actively cancelled by initiating a basic attack in the “wind down” time window that occurs at the end of the attack cooldown. Therefore, the optimal way to increase basic attack DPS and allow more mobility during combat is to issue a move order right when the attack delay finishes, and then issue an attack order after the duration of the attack cooldown completes. This is known as stutter-stepping. The penalty of not stutter-stepping is a 0.2s increase in attack cooldown. This penalty is the same for all heroes.

Vainglory is unique from other MOBAs in regards to stutter-stepping. In other MOBAs, such as the wildly popular League of Legends, there is no penalty on DPS when not stutter-stepping; the only benefit it provides is being able to move between attacks. In Vainglory, if the hero attempts to attack actively during the stutter-step time window, an attack will be immediately issued. At perfect stutter-step, you can reduce BAT by up to 0.2 seconds, providing an increase in basic attack output, which is not present in other MOBAs. This increase in basic attack rate will be referred to as “damage boost” for the rest of the article.

BAT Aspects for Each Hero

NOTE: There is an issue where this table may require a large amount of horizontal scrolling on some devices. We intend to update with a fix at a later time.

*Vainglory servers run at 10 tickrate; thus, all numbers related to time are rounded up to the nearest tenth. Client-side, time is tracked precisely, so any time lost by rounding will be made up for with an extra basic attack once enough lost time accumulates.

Abilities interact with basic attacks in a variety of ways. These include attack cooldown resets, applying basic attack damage, altering attack delay, momentarily increasing attack speed and so on. Keep in mind that all of the details are not included in the in-game descriptions.


*Jump Jets: Attack cooldown is not reset immediately. It is reset after the first shot is fired, so you can fire another shot immediately.

Abilities that Apply a Basic Attack

These abilities apply a basic attack onto the target but are not tied to that hero’s attack delay. Instead, these abilities lock the casting hero in place based on their cast lock and post-cast lock. Cast lock is the duration of the ability’s animation before dealing damage. Post-cast lock is the duration a hero has to wait after casting an ability so that they can perform any other action. Some of these abilities will trigger their respective hero’s attack cooldown while others will not. This list does not include basic attack modifiers that just add special effects to the hero’s basic attack such as Catherine’s Merciless Pursuit, SAW’s Roadie Run, and Fortress’ Truth of the Tooth.

Baron: Jump Jets reduces the base attack delay of the first two attacks fired after 2.1 seconds of landing from 0.5 to 0.2 seconds. After the first shot is fired, Baron’s attack cooldown is reset, allowing him to immediately shoot another missile.

Gwen: Boomstick’s cooldown is reduced by attack speed just as attack cooldown is. Stutter-stepping while trying to fire a Boomstick shot with every basic attack you deal will not grant a damage boost. This is because the cooldown of Boomstick is set and is not decreased by stutter-stepping. However, this does not mean that you shouldn’t stutter-step! You still gain the benefit of moving around between shots.

Kestrel: The delay before Glimmershot arrows reload is similar to Thunder Strike—it is reduced by attack speed. However, Glimmershot’s scaling has a 50% multiplier and its cooldown is never affected by Atlas.

Koshka: Empowered basic attacks trigger a shorter attack cooldown than normal basic attacks (0.5 instead of 0.8). This means that stutter-stepping with empowered attacks provides a 25% increase in basic attack output (up from 18.18%).

Lance: After activating Combat Roll, the first successful attack in two seconds will have its attack delay reduced from 0.5 to 0.3s.

If Lyra chooses to unleash a light-heavy basic attack combo, her BAT will be so: 0.3 (attack delay of light attack) + 0.9 (attack delay of heavy attack) + 0.2 (no stutter step penalty). In addition, Lyra’s next attack is placed on an increased cooldown of 1.2 (up from 0.7). This means that stutter-stepping provides only an 8.33% damage boost (down from 20%) if light-heavy combo is used.

Atlas Pauldron and You

Atlas Pauldron’s interaction with base attack time is another center point of confusion. Few understand how it truly works, but it’s generally known that it reduces attack rate in some way or another. So, let’s get into the details.

Atlas Pauldron’s effect multiplies the attack speed of its affected targets by 0.35 (unlike SAW’s Mad Cannon which merely reduces his attack speed by a flat amount of 36%). Therefore, since it’s multiplying a number by a decimal, it will increase the target’s BAT.

Atlas treats Joule’s Thunder Strike cooldown like it treats attack delay. It can increase its cooldown but never above the base amount of 2.5 seconds. Kestrel’s reload time, on the other hand, is immune to Atlas’s effect.

That’s all! I hope you Vainglorians enjoyed this post, and if you have any questions, hit me up in the comments.

Credits
Special thanks to MrTeriyaki for help in testing. HUGE thanks to Zekent for being the most cooperative developer I have ever met, providing most of the information in this post. This wouldn’t have been possible without them.