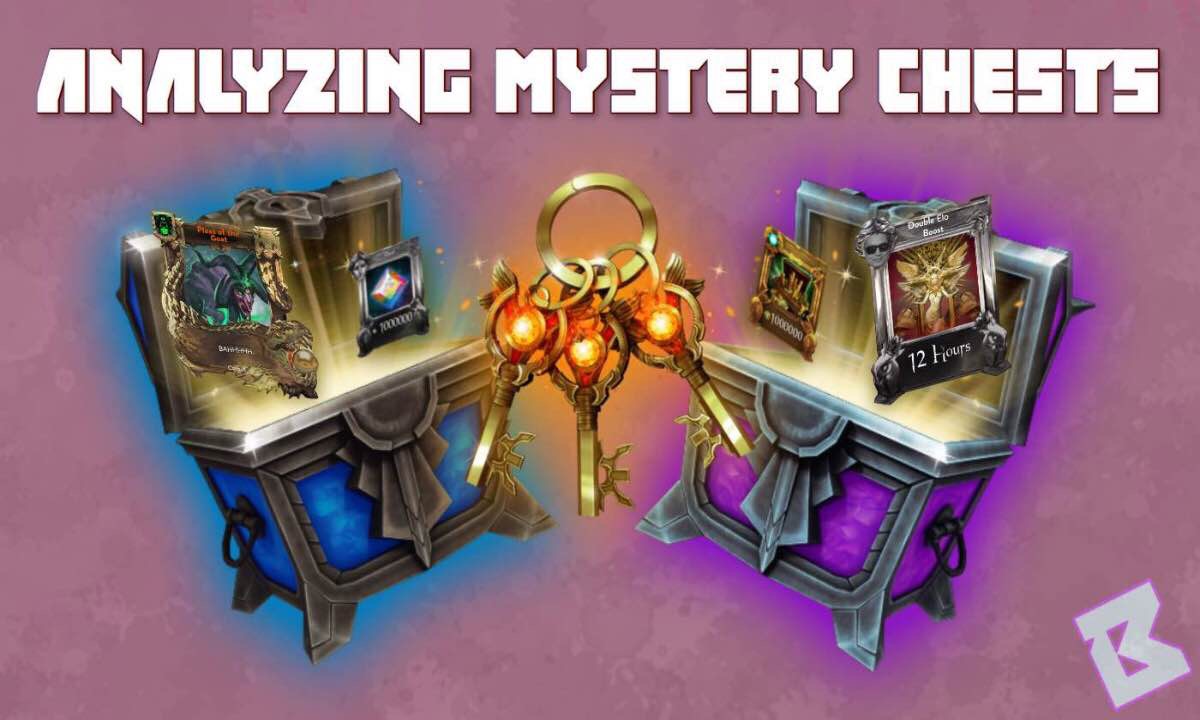 It’s been brought to my attention that Mystery Chest Drop Rates are officially online and publicly available courtesy of SEMC (and Chinese gambling regulations–yay!).

With this information, we can better quantify how you acquire what you want from Vainglory Mystery Chests, what it may cost you, and what your realistic chances of unlocking your desired targets really are. As a quick disclaimer, I don’t take any stance on whether or not you buy Chests and/or Keys–spend your money as you please. That said, you should understand how you are spending your money, so let’s figure that out.

To start, we need conversion rates between a few of the critical currencies. (Why are there so many? ;-;) We base conversion rates off of the least discounted price, because SEMC’s tendency to throw additional virtual currency in for translating more at one time makes things… difficult. The best representation of actual monetary value in a digital market is the harshest deal buyers and sellers agree on, in this case, the minimum exchange rates (2000 Glory for 300 ICE and 110 ICE for $1 USD). Therefore we have $1 USD worth 110 ICE, 1 ICE worth 6.667 Glory, and $1 USD worth 733.337 Glory. A Rare Chest unlock can be purchased for 199 ICE ($1.81), or with a Rare Key, so we’ll use this cost as the “entrance fee” to attempt to win anything from a Rare Chest. An Epic Chest unlock can be purchased for 999 ICE ($9.08), or with an Epic Key, and likewise this will be our “entrance fee” for getting anything from an Epic Chest.

THE METHOD OF ANALYSIS

Using probability analysis, we can attempt to build a confidence test that tells us how many attempts it takes to have a probable confidence of acquiring what we desire. We use 1.0 (true) minus the chance of getting what we want to derive the chance of getting anything we don’t want. Multiplied probabilities represent sequenced events, so we can raise that figure to any power to signify how many attempts we made before either getting the thing we want or giving up. The final output is our confidence (as a percentage) that the probability occurs. Therefore,

Where %probability is the chance of never getting the desired item. If we have a 50% probability, it’s a coin flip as to whether or not we get our target. If we have less than a 5% probability of that (losing on a cumulative 95% chance of success), we’ll consider ourselves very unlucky, so this would be the “maximum” price you could ever pay. We then take the number of attempts and multiply it by the cost (in Rare Chest opening transactions) to generate value propositions on the prizes earned. Dividing that price by a direct ICE unlock (if available) will show us the amount of money we relatively saved (negative percentages) or relatively lost (positive percentages).

HOW THE CHESTS WORK

When you unlock a Rare (or Epic) Chest, some math and minor logic takes place behind the scenes, and then you get your loot. In Rare Chests, there are five discreet “drops” that each have their own specific rules and loot options to choose from. Epic Chests have six such “drops”. The drops are randomized on screen, but you always get one of each drop listed for the Chest you open. Within each drop, a random number generator selects a number, which will correspond to one of the selectable loots (which may be a mini “drop” of its own). This means that each drop only selects one prize randomly, and the random distribution is detailed in the SEMC post linked above (repeat link to save you some scrolling). So, for example, if the random number generator picks a number between 1 and 100, Drop #1 landing on 42 selects the “Other Reward” portion, which has a mini-drop. That mini-drop may roll a 92 and then you’ll earn 800 Glory from Drop #1 as a whole! This process repeats for all drops, after which your chest rewards are ready to be claimed.

Rare Chest Drop #5 only selects from Opals, so every Rare Chest is guaranteed to have at least 5 Opals. This drop alone guarantees you anywhere from 5 to 1337 Opals per Chest opening, but don’t get your hopes up too high. The weighted average of 6.23 Opals means you’ll normally be grounded very much so at the bottom of that range, seeing mostly 5-8 Opals as one of your rewards.

Only Drop #1 has any chance at being a Hero or Skin, and with the potential exception of Opals, you probably aren’t using Rare Chests to grind for the other offerings. More on Opals later, but let’s focus on how the Hero and Skin unlocks work. 199 ICE, or $1.81, per Chest for a 35% chance of getting a random Hero or Skin seems kind of exciting. After all, it’s about 1/5th of the cost of a Hero or Rare Skin, and saves you even more if you roll higher, right? Let’s investigate that idea.

Here’s a table that shows you your actual, itemized (not tree-oriented) chance of getting anything in particular from Drop #1, the Hero or Skin drop. Any number with a “~” mark is approximated.

As you can see from the table above, Rare Chests are not that great of a value offer for Heroes or Skins, even if you don’t care which one you get. While getting ahead of the curve or not terribly far behind for non-specific Rare Skins and non-specific Hero unlocks can save you a penny or two, for the most part you end up spending more money than you might have spent otherwise. This, of course, doesn’t account for the benefits gained from your other drops, so I’ll let you decide what to do with this information.

WHAT ABOUT OPAL GRINDING?

With your expected total Opal output at around 7.88 Opals per Rare Chest (Drops #2-4 can offer Opals sometimes, adding to Drop #5’s weighted average), you could artificially set the price of Opals at ~$0.23 an Opal. This makes 150 Opal Skins like Bakuto Ringo worth $34.45 and 500 Opal Skins like Bakuto Phinn worth $114.85. The “direct” $0.23/Opal price inflation of Special Edition Skin prices via Rare Chests are then somewhere between 8,471–56,480%, even though you cannot outright purchase them with real-world money at the moment. This conversion rate also makes Gold Sparkler Skaarf (1000 Opals) the most expensive “purchaseable” in the game at $229.70!!

Epic Chests operate similarly to Rares in terms of mechanics, but their probability values are different. As advertised, there is both a 100% chance of getting a Hero unlock AND a 100% chance of getting a skin unlock, as these are the only selections from Drops #1 and #2. The minimum value of a new unlocked Hero or Skin is 900 ICE. If you manage to get one of each, it’s a minimum of 1800 ICE value. As with the Rare Chest, the final drop is guaranteed to be some number of Opals, between 20 and 1337 for Epic Chests, with a weighted average of 21.80 Opals. The entire Chest should average you about 27.80 Opals per opening in the long run, which is 67.7% worse yield per ICE than Opal farming with Rare Chests (if you’re only after Opals, open the Rare Chest instead!).

Here’s a breakdown of how using Epic Chests fares for particular targets:

For Epic Chests, the other main point of interest is Drop #3, which could net you either a bonus Hero or Skin unlock. Your options for Drop #3 are represented in the table below.

It takes twice the number of attempts (and about ten times the cost) to get a Rare Key from your Epic Chest as compared to a Rare Key refund from the Rare Chest, so shooting for this drop as a “free” bonus isn’t advisable.

Since we defined our other currency conversions at the worst but agreed upon exchange rates, we can re-calculate the value of Opals at the lower-yield rate for Epic Chests. The average of 27.80 Opals per Chest, and $9.08 Chest cost set an exchange rate of $0.35 per Opal. To repeat the earlier calculations, this makes 150 Opal Skins like Bakuto Ringo worth $52.88 and 500 Opal Skins like Bakuto Phinn worth $176.26, and finally makes the 1000 Opal Gold Sparkler Skaarf worth $352.52.

It is important to note that the percentages for specific unlocks such as Churnwalker the Hero or Golden Sparkler Skaarf the Skin will only decrease as more content is available to select from. With more to choose from, you’ll have a greater chance of hitting other unlocks.

I hope that you’ve found this article informative, and maybe even useful or eye-opening.

The "Generally Helpful" voice of /r/Vainglorygame, Fierte occasionally helps edit and create content for Broken Myth and enjoys both theorizing about and playing Vainglory

Latest posts by Fierte (see all)