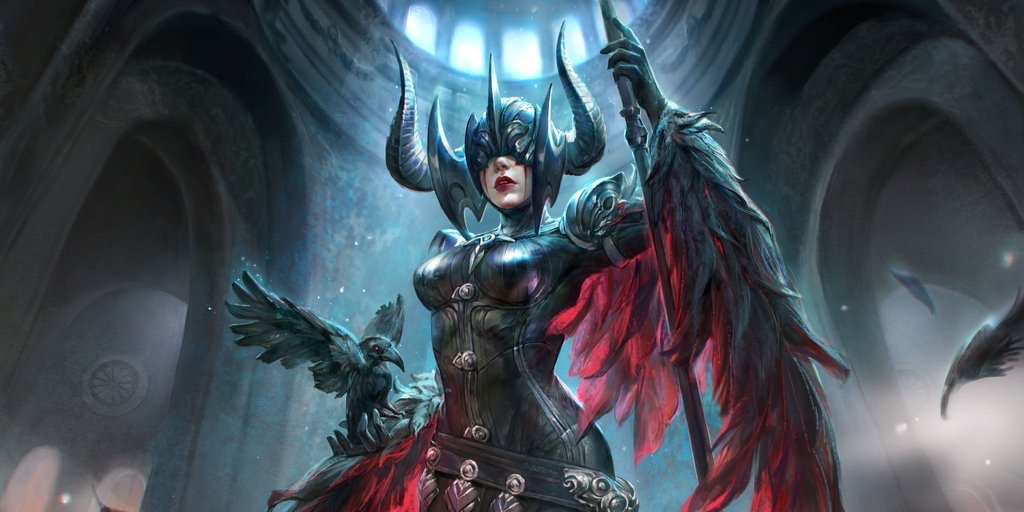 The grand hall doors burst open and Ringo struts into the room, followed haphazardly by the rest of the Fold heroes. Each files down to an assigned seat or varying size and luxury with their name embossed above it. Several seats remain empty, the names partially or fully obscured in a teasing fashion, but one creep is working hard on polishing up the plate that reads “Lance”. Chat and trash talk pepper the room until the house lights come down and spotlights flood the stage.  A podium stands quietly center stage, Vainglory’s logo decorating the front. The clack of heels echo through the hall moments before a woman emerges from backstage, casting the curtain aside with grace and directly into the face of a younger woman following closely behind. The two women take their places; the strong, well-dressed and refined woman standing behind the podium, and the meek slender one sidling up next to it. With a clear of her throat, the Matchmaker addresses the crowd.

Matchmaker– Good evening. In a moment we are going to begin a draft for Pinnacle of Awesome rank players. As all of those participating tonight are top talent, I would like to take a moment to excuse Mr. Ozo and Mr. SAW from having to sit through this draft.

Ozo somersaults up the aisle and smashes through the doors in the back. Matchmaker squints through the lights to SAW.

Matchmaker– Um, because the chances are low that you’ll be drafted in this game.

Matchmaker– Be that as it may-

Matchmaker (to Assistant)- Why is he talking like that?

The Assistant taps a few times on her tablet.

Assistant– It would appear to be a meme, ma’am.

Matchmaker– See that you don’t. (Raising her voice) Okay, why don’t we just get started. Blue team bans first.

A blue spotlight shines onto the audience, dancing over Ardan and Ringo before settling on Skaarf with the sound of a gong.

The curtains part to show a plexiglass box ten feet by ten feet with a rusted aluminum bench in the center of it. The walls are covered with graffiti, mostly advertisements for Vox’s DJ company and lewd comments about the ladies of the Fold. Skaarf gurgles and chirps in his seat, seemingly oblivious to the light still shining on him.

Matchmaker (to Assistant)- Take care of that.

Assistant whistles loudly and a minion is hurled from off stage. She catches it deftly and dangles it out by one foot. The minion wriggles and pleads.

Assistant– Hey Skaarf! Want it? Do you want it, boy?

Skaarf chirps happily and flies up on stage. As he gets close, the Assistant throws the squealing minion in the box. Skaarf swoops down in with it and crunching ensues.

Vox– Hey Matchmaker, you sure this is high elo? They banned Taka.

Taka flips to his feet and starts strutting up to the stage.

Taka– They don’t want to have to mess with me because they know I got swagger.

Phinn heads up on stage and receives a blue baseball cap, with yellow stripes to signify Utility build, from the Assistant. The Assistant also gives him a tiny blue hat for his bird. He pulls on the cap and heads over to the podium. With an apologetic gesture, he moves Matchmaker out of the way and takes the podium.

Phinn– I want to thank the Blue Team for bestowing me the honor of first draft pick. I will do everything in my power to take immense amounts of damage from the opposing team while simultaneously trying to bash and stomp them to death. And if my team should be in the lead come the fifteen minute mark I may even buy an Aftershock to spice things up a bit. Thank you!

Phinn walks over to the side of the stage to take his place. Matchmaker resumes the podium.

Matchmaker– I’ve said it before, speeches are not only unnecessary, they’re discouraged. We’re on a schedule, people.

Matchmaker– Orange team, for the love of SEMC, pick two.

The orange light appears over Vox but then moves to Celeste momentarily before gonging on Kestrel.

On the heels of the Assistant’s sentence, a second orange light gongs over Joule.

Kestrel– I would be honor–(Joule’s mech steps on Kestrel’s foot) Ahh! Churn, that hurts!

SAW– WHO IS CHARLIE? SAW NOT SHOOT CHARLIE YET.

Joule– I’ve been saying these aisles are too small.

Phinn– I concur. They should accommodate heroes of all girths.

Matchmaker (gripping a pen with white knuckles and muttering)- If I stab out my eyes with this, can we go back to blind pick?

The heroes head up on stage and both receive orange hats with red stripes.

Kestrel– Yea, but so will I.

Phinn– Thank you, that makes my world so much simpler.

Kestrel (to Matchmaker)- This is weak! Double crit damage weapon power is really easy to counter build and takes a while to scale up because of the cost. What are these guys thinking?

Matchmaker– I am not the orange team. They’re (waving a hand in the sky) up there, somewhere.

Assistant– Actually, we’ve been housing the players in the basement.

Matchmaker– That sounds about right. (to Kestrel) How about this. Why don’t you shut your vaguely elvish mouth, go stand over there like a good little idiot and we see how the rest of the draft works out? Is that okay with you, Princess?

Glaive– I ate a princess once.

Kestrel and Joule take their place on the opposing side of the stage.

Blue lights gong over Krul and Vox. They walk up the aisle together.

Vox– Hey, remember that time you dumped my dad?

Krul– My memory is tattered like a sheet left out on the line during a hurricane.

The men receive blue hats with red stripe for Krul and a blue stripe for Vox.

Orange light spirals around the remaining heroes, hitting on everyone more than once. At the last possible moment it gongs on SAW.

SAW (erupting from his seat, both fists raised above his head)- PUSH!

SAW stomps up on stage and gets an orange hat with a red stripe.

Matchmaker (slamming her fist down)- No one’s going anywhere!

Kestrel– Why not? This is supposed to be high elo, but we get this garbage because someone didn’t want to be a team player.

Matchmaker– I don’t think SAW is the entire problem here, I didn’t see a single thumb up or down the entire draft. Those are there to communicate with your team!

Kestrel– I thought I could trust my teammates wouldn’t all try to carry. It worked out for Blue.

Vox– Lemme stop you right there, Blue Team is most definitely on voice chat.

Kestrel– Great, a team. What’s the point of trying to solo queue anymore?

Whiny cries of agreement from the rest of the peanut gallery. The Matchmaker slams a hand down and the podium buckles a little.

Matchmaker– Enough! Everyday is the same thing. I’m sticking you with bad teammates or opponents that are too strong! But I’m not going to waste my breath with another speech about how difficult this is and how it’s not going to be perfect every time. Assistant, give me my hat.

The Assistant runs off stage and returns with a green hat bearing blue red and yellow stripes.

Matchmaker (motioning to the heroes on stage)- Everyone over there!

All heroes move to the Blue Team’s side. Matchmaker takes her place opposite them.

Matchmaker– All 6 of you will fight as as team, I will be your opponent.

Kestrel– Why is your hat green?

SAW– SAW NEVER THOUGHT SAW SAY THIS, BUT MAYBE SHE IS PUSHED TOO FAR.

She kicked their asses.