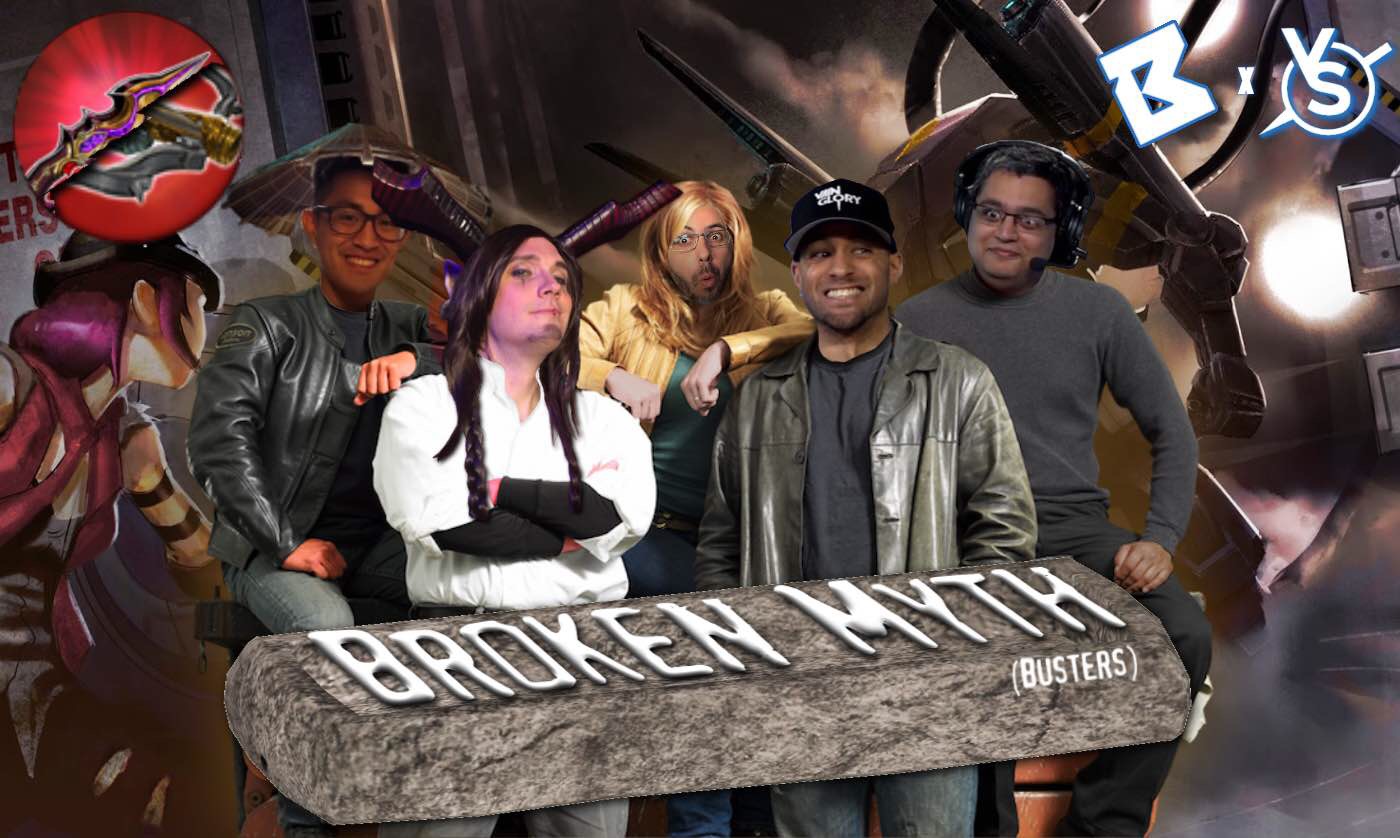 I’m shutterfly, part of the VainSocial developer team, and I am a Broken MythBuster!

In this series of articles, we are going to shed light on beliefs about the mechanics of Vainglory, challenging the meta and providing useful information. We will use real match data from the official Vainglory API, powered by MadGlory and backed by VainSocial’s data platform.

Let us start this series by looking at the trending build after the upheaval of the weapon power meta in Update 2.3 — busting 3 myths in total!

The build we are going to refer to as “TensionShiv” is a weapon power damage build, which combines the burst and pierce potential of Tension Bow with the attack speed of Poisoned Shiv. The data is based on 8100 ranked and 4900 casual matches between March 15th and August 11th, unless stated otherwise. 1700 were played in low tiers, 4700 in mid tiers, and 3900 in high tiers; over-representing high tier and under-representing low tier players slightly. Only matches that were won by shattering the Vain Crystal without an AFK player are taken into account.

The following graph shows the pick rate of TensionShiv on Jungler and Carry picks, averaged per day. After gaining popularity at the beginning of June, at the end of update 2.6 it was built on 1/10 of damage dealing participants. With 4 damage dealers per match, this means that TensionShiv could be found in about every second match. This is further illustrated by the pie chart showing the build pick rates in collected Pinnacle of Awesome and Vainglorious matches.
With 2.7, the pick rate declined noticably. Myth #1: TensionShiv is for Carries Only In the pie chart above, you can see the percentage of matches won by individual hero in the inner circle, split by role in the outer circle. Heroes with less than 5% win participation are labeled “other.”
Why are Vox, Idris, Gwen, Ringo and Glaive on top and SAW and Baron are missing? Some theories:

Myth #1: Busted! TensionShiv is a viable weapon power build and not just for carries. Later, we will see a comparison of the effectiveness between the roles.

Only data from high tier players is used for this statistic since they can capitalize item advantages better than the rest. This heatmap compares the average sum of damage dealt to heroes in 3–5 minute intervals between TensionShiv Vox, Vox with other builds, SAW, and Baron. You can see that Vox’s natural damage output scales earlier than Baron’s, but later than SAW’s. Baron’s damage output at 30 minutes is superior to Vox and SAW’s. SAW has the highest damage output until 12 minutes, to where he is outscaled by Vox. TensionShiv shifts Vox’s damage output into the early and mid game, where he is up to par with SAW at 8 minutes and furthest ahead of Baron at 15 minutes. After 20 minutes, the effective damage is still ahead of Baron, likely because in matches that did not end early, Tension Bow is replaced by items like Sorrowblade.

Myth #2: Busted! TensionShiv is a build to accelerate the increase of damage output, and is viable in mid and even late game as well.

Myth #3: TensionShiv is a pierce build

Tension Bow features armor pierce, dealing a portion of damage that is not reduced by defense.

The numbers show the average defense pierce for carry and jungler from builds with TensionShiv, without TensionShiv, and with Broken Myth for comparison.
Taking a look at the data, we see that TensionShiv does not have a much better ratio of effective damage dealt to true (“raw”) damage than the average build, contrary to Broken Myth based builds. In 2.7, this gets even worse after a nerf to Tension Bow’s pierce ratio.
A jungler does not need pierce against carries that are often built with light defense. The effective pierce with TensionShiv is smaller than for other builds. A carry however deals a large portion of damage to captains or junglers with armor, and the data filtered for carries confirms that with slightly more effective pierce with TensionShiv than without.

Myth #3: Busted! In practice, TensionShiv only pierces when built on a carry. The pierce is marginal.

One Myth is left open: Is TensionShiv still viable after the nerf to Poisoned Shiv and Tension Bow in 2.7?
According to the win rates, it is not a top build anymore. At about 50%, it is not bad though, so it has become a situational build instead of a universal recommendation. You can track the build “Poisoned Shiv, Tension Bow, Breaking Point” on VainSocial’s build meta page to know the current situation.

This series is brought to you by VainSocial.

Latest posts by VainSocial (see all)