Codes of the Fold: The Unwritten Laws of Vainglory 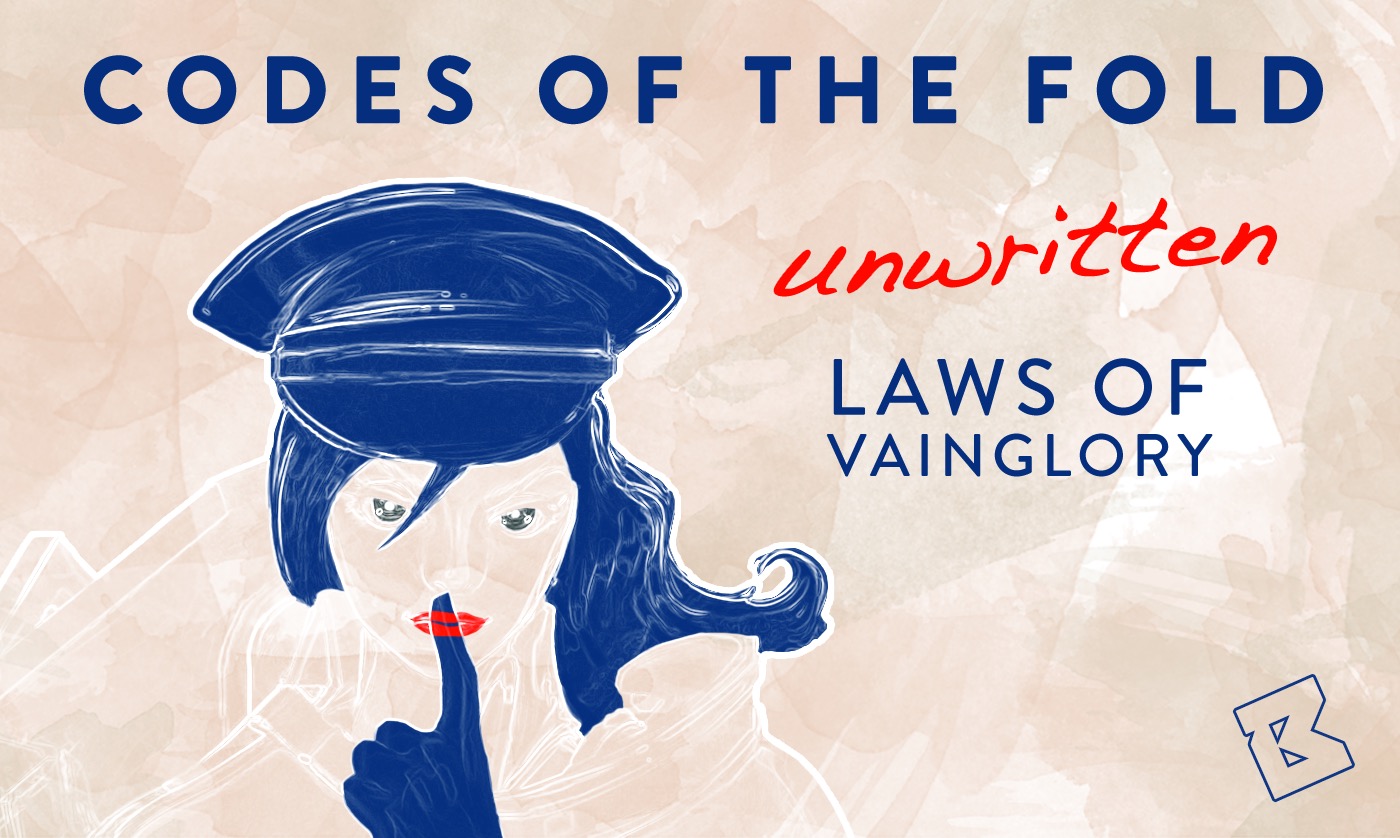 1. Every Ranked win gives 5 points of VST while every loss takes 10.
2. Someone will always dodge when you draft the perfect comp in solo queue.
3. If your team is about to capture the Kraken and either Glaive or Taka show up, they will steal it.
4. The AFK and troll players are always on your team.
5. You are 2x more likely to pocket a Legendary card for a Legendary skin you already own.
6. If it looks like you have one more game to get to a new skill tier, it’s two — the first win will leave you needing one more point to advance.
7. If by 15 minutes you have: Breaking Point, Barbed Needle, Travel Boots and Reflex Block on Blackfeather, you’ve already won.
8. Ringo’s Legendary Skin makes you play 35% better.
9. If your ally Ringo has a Legendary Skin you’re going to have a bad time.
10. SAW’s Legendary Skin deals more damage than his other skins.

11. Playing after reaching a new skill tier for the first time brings nothing but strife.
12. A very short downtime maintenance is just two downtime maintenances in disguise.
13. If a hero receives a skin in a new update, they have been touched.
14. New heroes are always banned in draft.
15. Missing a big minion causes you to miss more minions from the tilt of missing the big minion.
16. The heroes with stealth abilities and wall jumps always want to backdoor.
17. If you want tryhard matches, play Casual. If you want laid back matches, play Ranked.
18. Pro players deal 25% more damage.
19. If someone adds you after a loss, they are salty.
20. Post-game party chat after a win is nothing but smiles and compliments all around.
21. It’s not my fault I died, it’s the Captain’s fault.
22. One person highlighting to Captain from the get go is rare and awesome. Two people highlighting Captain is almost unheard of, but quite disastrous.
23. People always find it funny to exit to the lobby during a private Battle Royale when you get a fun hero.
24. If your teammate gives you a Treant, they’re awesome and should be cherished.
25. If someone doesn’t throw up a cheers ping at match start, that is automatically labelled as treason, and it should be assumed that they don’t want the team to succeed.
26. Any ping your ally uses right after you die is toxic.
27. In Battle Royale, they’re always in the top bush.
28. Killing someone after they’ve shattered your Vain is a good way to reassert your dominance as the better player.
29. If they aren’t taking Kraken, they are taking Kraken.
30. “Just one more Blitz / BR..” usually means 3 more.
31. The first game you play with a hero after unlocking a shiny new skin for them will be one of your worst matches on that hero yet.
32. Actually getting the family comp in solo queue makes it 2x easier for you to bond with your teammates and build synergy.
33. At around the 1 minute mark, all players are required to have a dance off by the Elder Treant. The best dancer earns the right to get the last hit.
34. Hearing the announcer say “RARE” isn’t rare at all.
35. Telling your Captain “We need vision” when they’ve placed lots of vision already is the fastest way to make another enemy.
36. The talents you get from chests will be anything but the ones you wanted.
37. If you have failed to pull an unreleased skin from their special chest even after multiple tries, rest assured all of your friends who tried got the skin in 1-5 tries.
38. Getting competent Captains in solo queue is rare as Druid missing lane CS.
39. Turrets somehow always leave your opponents with a sliver of health after they dive you, but whenever you do it never fails to eliminate.
40. Are there a few heroes that you don’t play at all? You’re in luck! You’ll be sure to unlock their Legendary skin in your next Rare Mystery Chest.
41. If a Legendary Talent shows up in your shop for the first time, it’s usually for a hero you don’t play, but it’s so rare and shiny that you’ll just have to get it with your extra Glory.
42. People say it’s rude to kill an AFK player … until it’s a Ranked match. Then, all of a sudden it’s fair game.
43. Solo queue teammates never want to surrender unless the enemies are at your Vain and about to close out the game.
44. All Captains secretly judge their laners for missing a CS.
45. If there is ever going to be at least one time where you lag during a match, it will be right after initiating on the enemies in a decisive teamfight.
46. It’s okay to blame a loss on your device, your teammates, your internet, the draft, your parents, your spouse, your dog, your cat, the weather, or even Zekent — but never yourself.
47. Off meta carries and supports are socially acceptable if they win. Rest assured though, if an off-meta pick happens to lose, the entire loss will be blamed on that pick, and nothing else.
48. You’ll never find a more happy player than that one long time Twitch viewer getting randomly matched with their favourite streamer for the first time.
49. Vainglorious Bronze can be divided into 4 demographics:
The players who are there because they want to be competitive
The players who want to be able to snipe pros and streamers
Individuals that have friends who are really good at the game
Those who are only there because they think the trophy looks nice and the name sounds cool (they are right)
50. Developers are focused in all teamfights, no matter what, even if they are using a maxed out Raid Boss talent with Fountain and 7 Aegis.

codes of the fold sarcasm