Codes of the Fold Volume 2: The Unwritten Laws of Vainglory 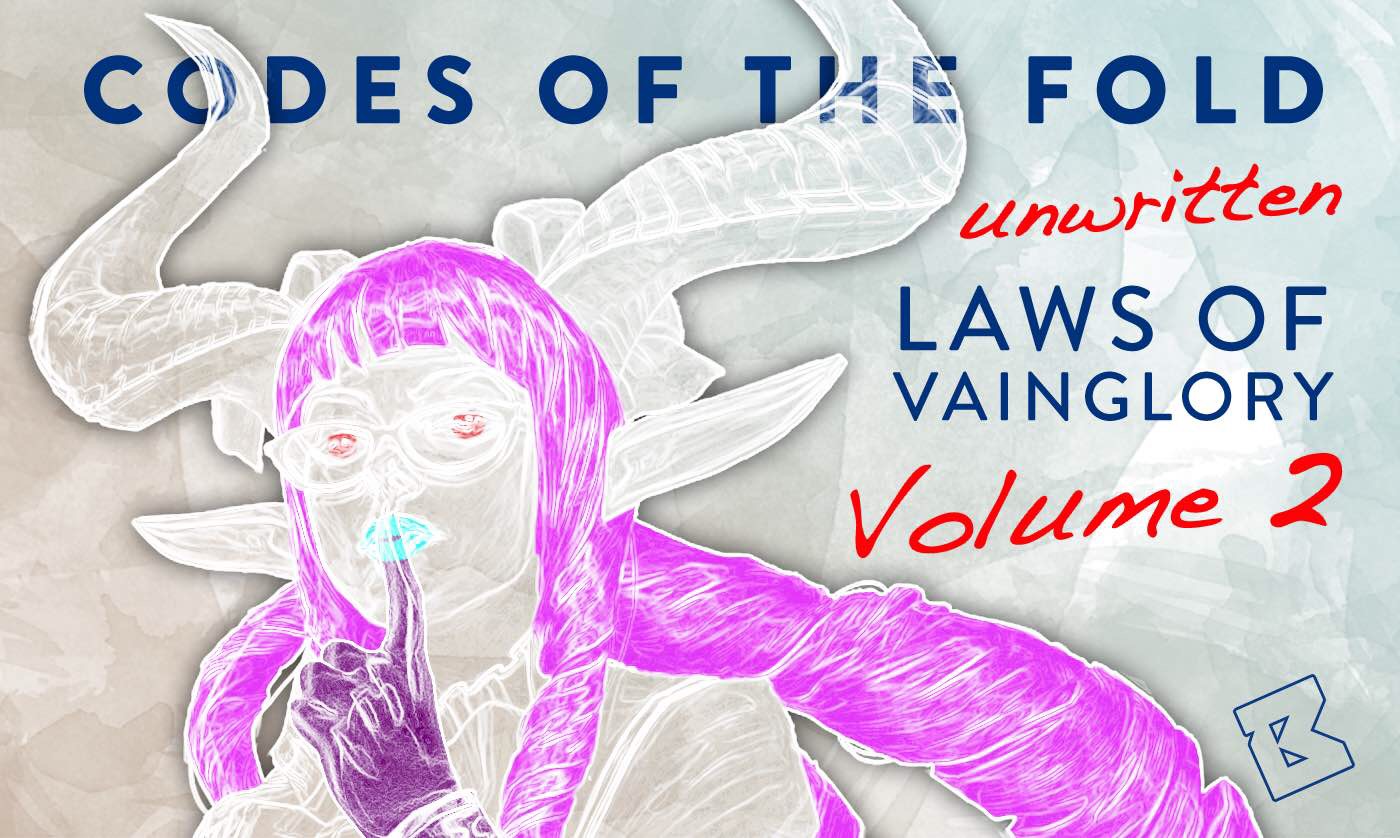 This is a continuation from volume 1 of the Unwritten Laws series. If you haven’t read it already, be sure to do so now!

51. When people sell their builds after a match, they are either salty they lost the game or are making sure their top secret, totally not meta build doesn’t get copied. (*cough* Weapon Lane Petal)
52. Vox never leaves the meta—he only takes an annual vacation.
53. When someone reaches Vainglorious Bronze for the first time, there will always be that one person who says, “Congrats! Now onto Vainglorious Gold? :p”
54. You never care about Great Karma until it is gone.
55. Everyone else’s 5 hero talent chests: 2-5 awesome Legendary talents. Raid Boss, Piercing Shot … you name it, they got it. Your 5 hero talent chest: Rare!
56. If the duo party doesn’t fill for the solo queuer, strife WILL follow.
57. Want to know what type of player your captain really is? Ping “We need vision!” —

58. Saying “Hoi PBE pls!” doubles your chances of getting into the PBE. Developers HATE this awesome trick!
59. Getting AFK forgiveness for a match you were losing is like having the professor cancel class on a Monday morning—an overwhelming sense of relief.
60. People in solo queue always want to get their comfort picks, even if it means they will get hard countered for first picking Krul. It is okay because they are on their comfort pick and will carry! Always assume positive intent.

61. Saying “GG” is only toxic if you were the winner.
62. If you ever say to your party of friends before a Battle Royale, “Boy, I hope I don’t get that hero…” you increase your chances of getting that hero by 40%. (Can be manipulated to your advantage.)
63. The one time you decide not to check the enemy tribrush while taking the Gold Mine is also the one time where the enemies will sneak out, steal it and then ace you.
64. Wall jumps work fine until the moment you need to use it to escape an enemy’s pursuit on low health.
65. In solo queue, your teammate Lyra will almost always send you into the middle of the enemy team “accidentally” when she tries to escape with her Arcane Passage.
66. Fortress either dominates the meta or gets dominated by it.There is no in between.
67. Sometimes you will meet allies in solo queue that synergize so well with you, it is like you’ve been playing together for months. However, if you party with them right after that magical match, the magic WILL disappear.
68. In solo queue, your teammate Glaive will knock the enemy laner to safety with Afterburn at least one time per match.
69. Blind pick, draft pick or even through a ban, SAW instalockers always find a way to ruin your day.
70. The smiley face and thumbs up pings are used sarcastically 70% of the time.
71. There is no better feeling than beating the troll that lost you the match prior. There is also no worse feeling than getting matched with them a second time…
72. If you farm the lane at low health against a Kestrel or Celeste, prepare to be sniped.
73. Devs, pros and streamers who lose are taunted twice as much.
74. If you acquire a good skin for a hero you hate, you will start to hate them less and less as time goes on.
75. Following @VincitoreVG on Twitter will increase your winrate by a stark 28%!
76. That first match you play after upgrading your device or Internet will be nothing but sweetness, even if you lose.
77. The most satisfying thing about clearing a big minion wave is not all the money you get, but the sound of the coins dropping from the minions’ pockets.
78. When an Ardan taunts, he is usually directing it at his own team rather than the enemies.
79. Krul on the enemy team: Lives forever, uses a strong build, always blocks Atlas, fights smart … probably Oracle’s smurf.
Krul on your team: Thinks he outnumbers the enemies rather than the other way around when he fights 1v3, rage pings, buys a Light Shield after his 12th death 19 minutes in, tries to solo Kraken when all the enemies are alive, initiates with Spectral Smite … still probably Oracle’s smurf.
80. If your team invades the enemies at match start and the enemy carry has been missing the whole time, your back jungle farm has probably been missing the whole time as well.
81. Starting defense first on a carry is the ultimate sign that they are a tryhard.
82. When a Taka uses Kaku he almost always goes the opposite direction from where he was heading while visible, yet it almost always fools whomever he tries that on.
83. 95% of people click on the video then exit right away when they get those quests that require you to watch an academy video. The other 5% have just found out from reading this and are eternally grateful for this revelation.
84. Getting matched with a duo of pro players brings forth a great feeling of relief from seeing that you got matched with great teammates, as well as a newfound willingness to play captain or with an unorthodox strategy.
85. A match always gets found whenever you decide to start typing something to your party.
86. The type of person who only rushes objectives in Blitz is also the type of person who never gets invited to parties and does not flinch when a dog dies in a movie.
87. Nothing feels worse than having that giant minion wave get cleared by the captain because you were dead.
88. 50% of Vainglorious players are Vox mains.
89. People will always complain about a balance decision made in a new patch BEFORE the patch even comes out.
90. Playing as captain is a lot like being a retail worker:

91. If the enemy laner has a sudden surge of confidence, his team has just arrived to the lane.
92. Never trust an Ardan that self-casts Vanguard more than 3 times in one match.
93. On the day a new hero releases, only the fastest instalocker gets to play them.
94. Saying “I’m Vainglorious, kid” automatically wins you any Vainglory-related argument. Double points if you are not actually Vainglorious. Triple points if you are Credible Threat. You lose points if you are a Vox main, however.
95. Carrying your team to victory as a captain: 0 honors, salty teammate adds you to say “We needed more vision, nab.”
Going 2/9 after only building Scout Traps and Journey Boots on jungle Koshka: 6 honors, PlayoffBeard invites you out to dinner for a job well done.
96. If you are randomly matched with someone you know well, it is customary that you ping “Go” on them 1-3 times, following it up with a Starry-eyed ping.
97. Your first match with a pro player is always the most memorable.
98. During the ban phase of draft, the thumbs up and thumbs down ping mean the same thing.
99. Even if the Vainglory logo was all over Times Square for a week, the community would STILL cry SEMC is not advertising enough.
100. Hearing the enemy Fortress howl while you are on the enemy’s side of the map preludes death 80% of the time.

codes of the fold sarcasm