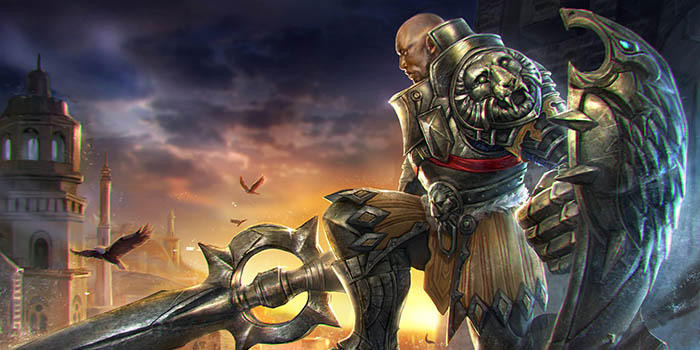 For the first time ever, BrokenMyth brings you an exclusive first look at unreleased content from SEMC! As we know from previous reveals, Lance is a new roamer set to be released in a future update. SEMC is hoping that means 1.18, but they will not release a hero they feel isn’t ready. That being said, Jeff and Marty have gone behind enemy lines to bring us this exclusive Lance information!

As with all unreleased information, everything is subject to change. The following descriptions are currently true, but may not make the final cut!

Crystal power increases his directional damage reduction and the duration of his crowd controls. Building up to 300 CP is recommended for roam hybrids. Weapon power increases the damage of his abilities and attacks. Also, Lance’s basic attacks can critically strike and apply on-hits to multiple targets at a time. Lance’s attacks and abilities take more time to complete than many heroes, but are designed to combo together.

Lance’s basic attacks hit every target in their path. Additionally, Lance will continue to face his target after attacking, reducing damage taken from their direction. After using any ability, Lance’s next attack will strike very quickly, dealing bonus damage.

Lance strikes through his opponents, damaging them and rooting them in place. If this attack hits at least one enemy, Lance will immediately recover from the ability.

Lance sweeps opponents away with his weapon, damaging them and also stunning them if they collide with a wall. Afterward, he holds his shield steadfast, greatly reducing incoming damage from the target direction.

Lance rolls in the target direction.

Lance’s abilities and attacks all depend on his position and angle. This short cooldown roll allows him to quickly reach good positions, acting as a glue for chaining his abilities together.

We’ll be following Lance throughout his development lifecycle, so check back often!

[Live] Coffee with Zekent – May the Fourth