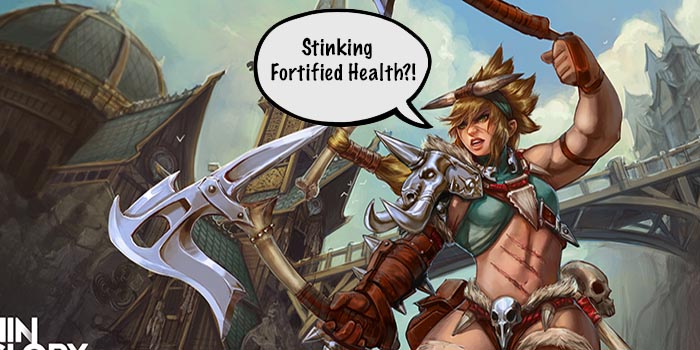 When Reim grumpily trudged onto the fold, he introduced a new mechanic: Fortified Health. To be honest, I kind of mentally glossed over how this mechanic exactly worked. It was sort of like a barrier, but it wasn’t. A number of changes to heroes regarding barriers are coming in update 1.14, so let’s discuss this mechanic in detail!

What is fortified health?

For example, let’s say you have 1000 health. You use an ability that causes 100 of your existing health to become fortified. Fortified health absorbs twice as much damage as normal health. Fortified health isn’t an additional value added on to your health. Instead, it takes a portion of your existing health, and makes it twice as strong. If you take 300 damage, 100 of your fortified health absorbs 200 damage, then it is gone. Then, you take the last 100 damage. You are left with 800 health.

It’s important to note that you cannot fortify more health than you currently have. If you have 100 health, and you gain 200 fortified health, it only fortifies 100 of your health, so your total health is still only 100.

The reason for these changes is in the patch notes:

Several heroes have kits that invisibly grant damage reduction in the form of bonus defenses. We’re removing the stopgap solution as now we believe Fortified Health (introduced with Reim) is a better way for indicating that heroes are temporarily tougher than normal, but can still deal damage to their health (unlike Barriers).

In summary, SEMC is doing a good thing by trying to make defensive buffs more visible to players so they know when an opponent is stronger than normal. Let’s take a look at how these changes may affect the performance of each hero.

UPDATED: Originally, I had used EHP (effective HP) as a measure to see how effective the temporary fortified health stacked up to armor and shield boosts. This wasn’t the best measurement as it would require a hero to go from 100% to 0% in order to be accurate. Thanks to Badtoro, I’ve done the math on “damage mitigated” for certain abilities against heroes. This is a more accurate measure of these temporary bonuses than EHP!

We used a hero build of Frostburn and Broken Myth, on popular crystal carries such as Skye, Celeste, and Joule. We then measured the damage against the hero with base stats, Kinetic Shield, and Aegis. For Phinn, I tested Aegis, and Fountain of Renewal and Crucible.

In 1.13, Adagio used to gain 50 armor and shield while channeling Verse of Judgement. In 1.14, Adagio instead gains 250 fortified health.

Again we see the same result, for very large damages, base armor and shield come out ahead for 1.13 Skaarf. Once you add Kinetic Shield or better, 1.14 Skaarf pulls ahead. For smaller damages, 1.14 Skaarf is always better.

Some folks were confused about Red Mist in the update notes, because it says she is supposed to gain 100 fortified health per second. However, there is a new Rona bug in 1.14 where she only gains fortified health once. When this is corrected, her mitigation values will sky rocket!

On top of these changes, Rona also no longer gains a barrier when attaining max rage. They have increased the damage of her Into The Fray, but I fear the loss of tankyness is going to make Rona hard to compete in the 1.14 meta. Her only saving grace may be the Breaking Point changes and how well it works with Red Mist. Fear not, Rona lovers, when Rona’s C ability grants the proper 100 fortified health per second, she will become very tanky.

Overall Assessment: Large Nerf, but will be corrected into a huge buff in the future

Blackfeather used to gain 300 shield and armor when dashing through his ultimate, Rose Offensive. In 1.14, this is changed to 140 fortified health.

Every which way you slice this one, it’s a nerf. 300 shield and armor were huge, making Blackfeather practically invincible during his ultimate. So it’s likely that this nerf was intentional.

What we’ve now discovered is that fortified health’s effectiveness depends on a few factors.

This change is a welcome one as you can clearly see when a hero is “stronger” temporarily. Many of the changes were very similar in mitigation; Adagio and Skaarf tiny buffs, and Phinn a tiny nerf. Some of these changes, especially for Rona, were significant nerfs because of the bug. Hopefully, when 1.14 is released and players get a chance to try out these changes, we’ll know if actual gameplay supports the numbers and theorycrafting. After all, you can try to predict the outcome of something with numbers, but reality can sometimes be a different story!

Vainglory Weekly News Round Up