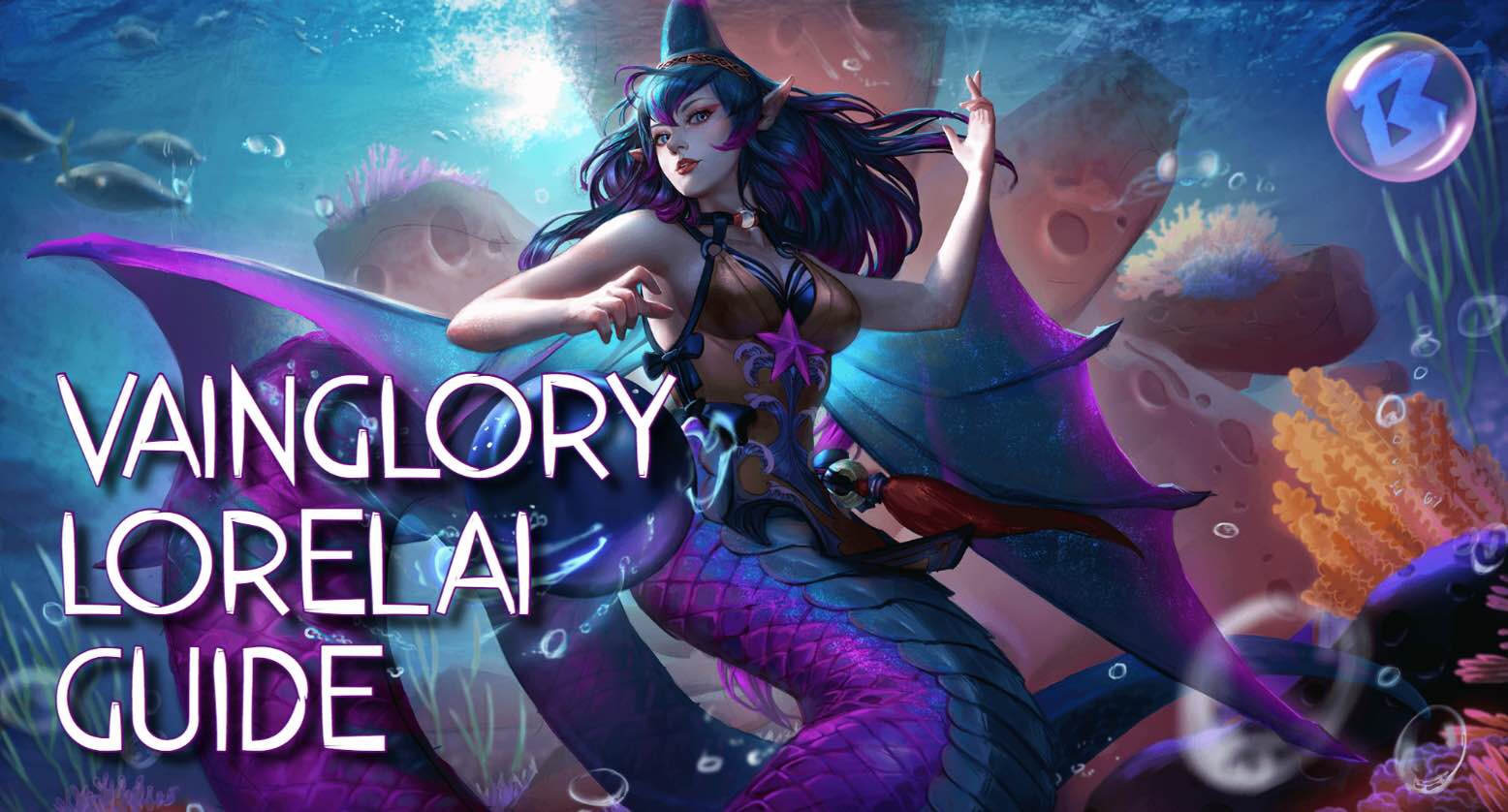 The newest addition to the Vainglory hero roster is Lorelai, a backline mage support who carries her team through all three lanes at the same time! Well, not quite yet… Lorelai debuts in Update 2.10 to shine in zone control and team utility with a clam full of crowd control. Broken Myth is here with the full scoop on Lorelai’s abilities, talents, best builds and key tips to hold the most air while submerged in the 2.10 meta!

Lorelai makes her mark on the Fold with an entirely new theme: Water! Skaarf’s 9-skin collection won’t stand much of a chance against this little mermaid (who is NOT a mermaid) — unless recent science innovation weighs over Pokémon to say fire trumps water. Much like Lyra on her nightmarish release, Lorelai is viable as both a backline captain and heavy-hitting crystal carry. Let’s dive into her ability rundown.

Fish Food (A) — Lorelai calls and waits for Sebastian and Flounder to stop singing and be useful. After what feels like 17 hours of “Shake Shake Shake Senora” (which is really 0.8 seconds), she gives up and commands a pink magical sea clam to damage and stun enemies in its radius. As with her other abilities, a pool then lingers at the clam’s location, dealing damage over time to enemy units crossing its path. Make use of the immediate stun and lasting damage over time to manipulate where you want enemies to be.

Splashdown (B) — A sphere of water is cast at a target location. After a short delay, the sphere embodies into a pool. This pool speeds up any allies and slows down any enemies passing inside. The speed and slow strength increase with Splashdown’s leveling, so decide whether or not your friends and foes will be impacted from the effects before taking an ability overdrive!

Waterwall (Ultimate) — Lorelai channels her inner voodoo and summons a veil of water around a target allied hero. The veil cleanses the ally of any movement-impairing effects, just like the cleanse from Gwen’s Skedaddle ability activation. Shortly after, the veil drops on the ground and hell hath no fury like a woman scorned; a Splashdown pool of water is left on the ground for 8 seconds, and the target allied hero receives the largest barrier to be added in Vainglory yet (1000 barrier at max level!). With a cooldown not as forgiving as Lorelai’s other abilities, Waterwall should be used sparingly and when you know you or an allied hero is facing imminent death.

Splash Doubledown (Rare) — Splashdown receives two charges and reduced charge time and energy costs. Especially when combined with Echo, placing multiple of the movement-impacting pools in conjunction with each other allows Lorelai to isolate enemy heroes for her team to dive upon.

Clam Up (Epic) — Fish Food has an increased stun duration. Utilize the additional disrupt time to reposition your team with Splashdown. Landing your stun on multiple enemy heroes becomes more important and worthwhile.

Wonder Wall (Legendary) — Lorelai’s ultimate, Waterwall, now grants the target allied hero invulnerability instead of barrier and has a reduced cooldown speed. Purchasing a sufficient amount of cooldown items with this talent equipped places Waterwall on a very short cooldown; almost enough to provide everlasting invulnerability to an allied hero.

Fountain of Renewal — Starting with Fountain of Renewal is typical for any captain (unless your name is R3cKeD) for the added shield, health and team-wide burst heal. Keeping your team alive means they can deal more damage and hunt more fish! Fish are friends … not food.

Crucible — Yet again another standard captain item, Crucible provides a chunk of bonus health and a team-wide Reflex Block to counter those pesky crowd control abilities, like Adagio’s Verse of Judgement and Churnwalker’s Trespass.

War Treads — Lorelai lacks mobility apart from Splashdown’s allied speed boost, so War Treads make up in that department. For captains, strength lies in supporting your allies with a variety of tools. Plus, MOAR HEALTH!

Frostburn — Frostburn coincides well with Lorelai’s high crystal ratios. Additionally, all of her abilities and basic attacks deal crystal damage — proc the slow from Frostburn whenever the opportunity arises!

Clockwork — Shadowing in Frostburn’s footsteps, Clockwork too benefits from Lorelai’s already short ability cooldowns. Because of this, she may struggle with energy management in the mid-to-late game. Picking up Clockwork around this time remedies the situation as well as provides auxiliary crystal power and decreased ability cooldowns.

Nullwave Gauntlet — Enemy heroes, especially the captain, will be actively anticipating the next stun or slow out of Lorelai. If you can land a silence onto the enemy captain, thus disabling their team Crucible, you’re golden to zone out the enemy carry. Even if Nullwave Gauntlet is blocked, you have still lowered their number of available blocks for that fight. Don’t forget to pick up vision, too, or you’ll suffer the wrath of an angry solo queue Corpus!

Clockwork — Clockwork grants additional energy, crystal power and lower cooldown speeds. Just like in Lorelai’s captain build, you’ll be putting her abilities off cooldown before SEMC can hotfix her release.

Aftershock — Another item in the lower price range, Aftershock pairs with Lorelai’s short ability cooldowns to chip enemy’s health bars away over time. While enemy heroes are stunned from Fish Food or trapped in Splashdown’s slow, act fast to proc Aftershock’s passive. Don’t forget that it also restores health.

Aegis — Lorelai’s base health and defensive stats fall in the middle of the spectrum, but that doesn’t mean she can forget about living (that’s Krul’s job). Aegis is a go-to item for the shield and Reflex Block capability, unless you’re facing a double weapon power team. In that case, settle for Metal Jacket.

Broken Myth — Because Lorelai’s damage is dealt in an abundance of attacks, you want to make the most out of your output over time. Broken Myth does just that by piercing through some of the enemy’s shield and granting a deal of crystal power.

Journey Boots — With Lorelai picking up enough energy management tools in this build, she’s left to just find an escape; and Journey Boots accomplishes exactly that. Upon activating, try to damage an enemy hero as soon as possible to lower your boots’ cooldown and prepare your next flee.

Lorelai’s synergy with other heroes is comparable to a combination of Baptiste’s zone control and Lyra’s backline aid. In both the carry and captain role, Lorelai works best with tanky, frontline heroes that need a helping hand to deal damage, stick to their target and survive; like Glaive, Krul, Ozo and Reim. However, when playing with heroes that are more effective from longer ranges out of harm’s way, Lorelai is left exposed to the same danger these heroes face; like Celeste, Lyra, Samuel and SAW.

All heroes in Vainglory ship with some form of crowd control, and Lorelai is no exception. Her abilities are not intended to be “lone activations” — instead, chain them together to manipulate where you want enemies to be. Have an enemy Catherine chasing you down? Drop Splashdown to slow her, which makes for an easy stun from Fish Food. Then, you’re left with two pools and a speed boost to utilize for empowerment. Be on the lookout for a full Broken Myth Support Synergy article on Lorelai coming soon!

Despite Lorelai’s kit being packed to the brim of Ciderhelm’s cage, there’s plenty of open space for countering her — and it starts in draft. Expect Lorelai to be banned or picked in the first round of almost every draft in Update 2.10. As the new patch grows older and the meta develops, the general population of players will become more skilled with Lorelai, and so countering tactics used initially may not be as effective down the line. Because of this, finding Lorelai’s weaknesses lies in an understanding of her kit; better yet, matching the strengths of other heroes’ kits to open wounds in Lorelai’s.

Aside from drafting heroes, there are also certain strategies and team composition pairings that can wear Lorelai down. A team with high mobility and/or aggression, especially in the early game, has the potential to wipe Lorelai out of her territory. By isolating her in a team fight, the only escape she has is Splashdown’s speed boost; which will not get her very far compared to a wall-hopping ability like Joule’s Rocket Leap. Be swift about taking a lead early on to initiate a snowball moving into the mid-game, where Lorelai excels in damage and utility.

That’s a wrap! Update 2.10 Activation is planned for Wednesday, November 8th at 8AM PST / 14:00 GMT. If you have any questions about Vainglory’s newest hero Lorelai, ask away in the comments below, and we’d be happy to answer them.