The Pros Have Big Bounties on Their Heads 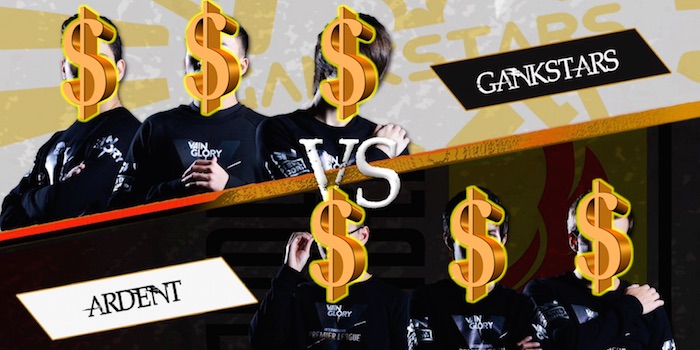 Someone should have called Boba Fett, because bounty hunting was in full swing for the VIPL semifinals. The clash of American teams GankStars and Ardent Alliance this morning had a surprising outcome that didn’t go as we anticipated. After three incredible back and forth games, Ardent Alliance came out on top and will go on to face Invincible Armada in the VIPL finals on Saturday. Both teams showed dominant strategies and mechanics throughout, but the larger gold bounties on kills that are relatively new to the Fold became a huge deciding factor.

The semifinals are the first games in this VIPL season to be played on patch 1.12, in which gold bounties for kills got a significant change to benefit the losing team, and this impacted the match-up of GankStars and Ardent. The first game saw a strong early lead for GankStars as CullTheMeek and IraqiZorro exhibited comfortable skill with Koshka and Skye respectively. Ardent Alliance struggled as MICSHE‘s Vox and ShinKaigan‘s Kestrel tried to build up power to counter the quick aggression.

GankStars took the Kraken around 16 minutes and pushed toward Ardent’s last two turrets with a 6K gold lead, but what seemed like “GG” turned into an ace for Ardent with only their vain left standing. The kill bounties on all three Gankstars players, as well as 500 gold apiece for Kraken, closed the gold deficit to 3K. Ardent went on to get two more kills in the next team fight, took two turrets as gabevizzle backed off, and went back to base with the gold dead even at 35.2K. Ardent continued to push toward victory until an expert Kraken steal by CullTheMeek secured the win for GankStars, but this one could have gone either way due to Ardent capitalizing on that gold bump.

The second game saw similar carries for both teams, Iraqi still scary with Skye, and a mirrored start for GankStars with early dominance. Ardent farmed diligently, and stole the miner with a sweet Kestrel snipe, to keep gold even despite Gankstars leading considerably in kills. The game remained even throughout, so large kill bounties did not come into play as Ardent fought their way back to a win and forced the series to a third game.

The final game used blind pick and no bans, so CullTheMeek was finally able to bust out his Blackfeather play (the Book of Eulogies bug was hot fixed) and both teams chose Skye for lane. An off-meta roam Taka for gabevizzle proved a costly gamble as he wasn’t able to sustain his carries or burst his enemies significantly enough to pay off. By 12 minutes in, Ardent rose a 4K gold lead and 12-1 in kills. Ardent fought patiently for the remainder of the game and ultilized superior positioning so that not a single hero was caught out and, therefore, GankStars could not take advantage of the massive bounties. This was similar to the way Invincible Armada handled their second game with WEV, being sure to play it safe so the losing team could not close the lead. Ardent broke their opponents crystal with a 15-1 kill advantage in the most decisive, but still competitive, game of the match.

Throughout the series, Ardent had to consider both sides of the coin when it comes to death payouts. These come-from-behind kill bounties are a significant balancing improvement that further nullifies the “snowball” effect and makes every moment of the game crucial.

Good luck to Ardent Alliance as they face Invincible Armada on January 9th for the championship! Special congratulations to ShinKaigan who was awarded MVP honors for his increasingly effective Kestrel in all three games.

Looking for a Writer for the EU Competitive Scene