SAW Through The Mask 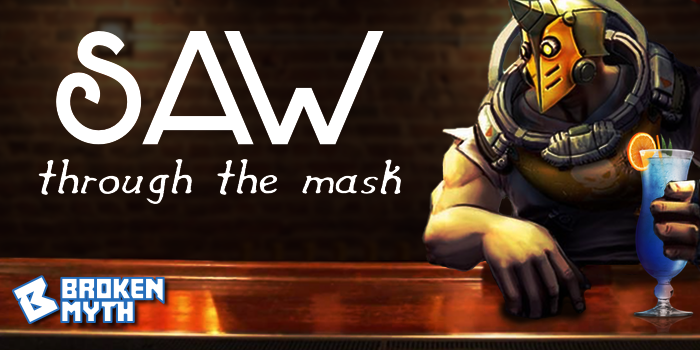 Blitz Bar, the hottest new joint in town, is positively popping tonight as all the Halcyon locals charge in for the “wasted in 5 minutes or less” promotion. The pretty young bartender is swamped with demands for doubles and triples of the strongest potions this side of the Fold. Just when shes about to go on break, a mass of masked muscle ponies up to the bar and slams down a meaty fist.

Bartender– You don’t have to shout, darling, I can hear you.

Bartender– Okay, what’ll ya have?

Bartender– I got that, what kind?

Bartender (rolling her eyes)- No problem.

She concocts something or other and slides it over to him. The big lug splashes some on his mask and nods approval. SAW sits down with his beverage, quietly splashing when someone nudges his shoulder. In an instant, SAW’s trusty blue blade of death is in his hand and ready for stabbing. The face of his attacker calms the instinct to kill. Momentarily.

Lance– I’m surprised to see you out. Thought you were an all business kind of guy.

Lance– Exactly, so what’s the occasion?

Lance– Yes, you did.

Lance raises his “excuse me sweetheart” index finger, catches her attention and orders himself a drink. It’s something really smooth and sofisticated that you’d never be able to handle. She brings it to him with a smile, he tips her with a big bill and a wink. They are most definitely going to rendevue later, but let’s not get focused on the wrong part of the story. Sipping his cocktail, Lance clears his throat and turns back to SAW.

Lance– Mind if I ask you something?

SAW– SAW SPEND NIGHT WITH YOU FOR TWO MILLION GOLD.

SAW– AND YOU NOT MICHAEL DOUGLAS, WHAT QUESTION?

Lance– Please don’t take this the wrong way, but, why do you talk like that?

Lance– While that is both existential and true, it kind of proves my point. Look, I haven’t been around as long as some but the other heroes tell me you used to have a bit more, you know, variety in your articulation. Then one day you slipped into this “lock of the old caps” and never went back. I think it robs you of some of your natural eloquence.

SAW– WHO ROB SAW? SAW NO HAVE RENTERS INSURANCE.

Lance– SAW, I think you know what I mean.

SAW splashes the rest of the drink onto his mask, some gets in the holes. He appears to swallow those drops.

Lance– I don’t want to push too hard here-

Lance– Try to stay on topic.

Lance– Why keep it up?

SAW (his shoulder slumping for the first time in recorded history)- COMEDY.

Lance– What’s funny about this?

SAW– SAW NO KNOW! PUBLIC LIKE, GIVE VOTE AND HEART AND SAY “IS FUNNY”.

Lance– Those things don’t have any real value.

Lance (Gythian sigh)- Yeah, they sure do.

The music cuts with a record scratch and every head in the bar turns toward SAW, faces aghast.

Lance– SAW, buddy, look at me. Don’t say that, don’t you ever say that! You are so much more than a simple one note meme. You have layers.

Vox pops up from behind the bar.

Vox– Does Skaarf have a cold, because that burn was sick!

Vox dips back down, never to be seen again, at least for this story.

Lance– And they don’t offer the surprises you do.

SAW pulls a bouquet of flowers from his sleeve and hands them to Lance.

Lance– See?! I didn’t know you had that, or sleeves. You’re a wonder, my man.

Lance– SAW. Wonder. Now, how bout this…what if you drop the caps, just for a moment. See how it feels.

SAW– I’m just a tad concerned of coming off as aloof, is all.

SAW– And in the past I’ve alienated people with my choice of colloquialisms.

Lance– Not everyone is gonna-

SAW– I sincerely appreciate this Lancelot.

Lance– That’s not my name.

SAW– Would you like to see my Proust collection?

Bartender slides an Atlas Pauldron down the bar to Lance.

Lance slams the Pauldron down in front of SAW and makes a hasty retreat. SAW unleashes a visceral howl and instantly starts spraying bullets everywhere.

Blitz Bar closed its doors that night. Actually, they were shot off.