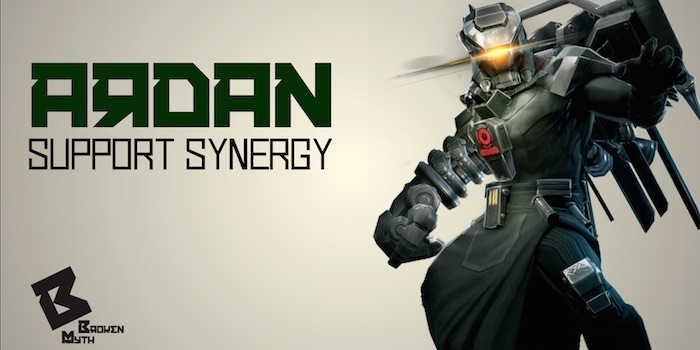 This is the third article in the Support Synergy series. In case you didn’t know, this series is all about analyzing supports and who they synergize with. This will help you choose which support you want with which comps, even in solo queue! The previous articles analyzed Fortress and Catherine. Today, we’ll be looking at Ardan.

Ardan hopefully needs no introduction. He’s always been a consistent support, and lately has been the top pick for support in VIPL and VGL, despite receiving nerfs in 1.12. After yet another nerf in 1.14, he is still one of the top supports; his ability to protect teammates and reshape teamfights is unparalleled, and he’s a heck of a lot of fun to play. Without further ado, let’s get into it!

What Ardan Does Well

Ardan’s heroic perk heals him for 1% of his missing health every time he takes damage. The amount healed is capped at 75% of the damage dealt to him. It’s important to note that this healing is a direct counter to small, fast ticks of damage, such as burn and bleed effects as well as Skye’s Forward Barrage. Ardan can also gain health with his perk while taking damage with a health barrier up. Additionally, Ardan uses Vengeance instead of energy. Only Blood for Blood consumes Vengeance.

Ardan leaps to an ally, giving them a health barrier that scales with 15% of Ardan’s additional health (from items), speeding them up as well as damaging and slowing nearby enemies. Every time the ally takes damage, Ardan gains Vengeance. If Ardan uses Vanguard on himself, the barrier, speed boost, and Vengeance gain are only half as effective.

B: Blood for Blood

Blood for Blood leaps to an enemy and punches them. The punch includes an auto-attack which can critically strike and also deals some crystal damage. This skill requires a full bar of Vengeance. On overdrive, this skill deals 25% more damage.

Ardan leaps to any location within range and throws down the Gauntlet, setting up walls around where he lands. Before he lands, a faint ring is projected where the walls will land. Any enemy hero who hits the walls will take damage and a stun. Enemy heroes who are on the projected ring will be instantly stunned and damaged when the Gauntlet first lands.

So, to summarize, Ardan has:

Ardan has a kit that that is focused around peeling for his allies and keeping them alive. Blood for Blood gives him decent early-game damage, while Vanguard and Gauntlet are strong abilities all game long, keeping him relevant throughout all points in the game. Vanguard is useful for increasing an ally’s survivability, making someone stick easier to a target, or slowing enemies. Gauntlet can be used to initiate a teamfight, disengage, or zone certain enemy heroes out (or in) mid-fight to change the dynamic of a fight as it is happening.

Ardan lacks hard, reliable CC. His stun (from Gauntlet) is the least reliable stun in the game and is extremely easy to Reflex Block or otherwise avoid. Because of this, Ardan doesn’t have target focus quite as good as Catherine or Fortress. Unless someone gets caught in a Gauntlet without an escape method, Ardan can’t lock them down and mark them for deletion. It should also be noted that Gauntlet, while an extremely useful skill, has one of the longest cooldowns in the game, and must be used perfectly every time it is off cooldown to really leverage its utility.

So who does Ardan synergize with? Adagio isn’t usually included in these articles because he is typically played as a support. However, it’s important to note that he can also be played as a Crystal Power laner or jungler, filling as a secondary carry/support hybrid. Team compositions including CP Adagio typically include a hero that benefits hugely from heals and auto-attack buffs, and are known as buff-the-XXXX comps. Ardan and Adagio are both staples in these comps.

Blackfeather, lane or jungle, currently works extremely well with Ardan. As he is played right now, Blackfeather is a super mobile bruiser who dances around his target, then executes enemies once full Heartthrob stacks have been built. Because Blackfeather needs to be in the middle of the enemy team to be doing damage and building stacks, Ardan is a fantastic choice, giving Blackfeather survivability and extra mobility.

Celeste has strong synergy with Ardan as a laner. Not only does her father protect her well with supportive Vanguards, but a well-placed Gauntlet will allow Celeste to drop stars (which do AoE damage) on the enemy team safely and even walk across the walls to peel assassins or sticky enemy melees off of her.

Koshka and Ardan is a classic jungle duo. After Hardek invented “Tankshka,” or a Koshka build that included a lot of defense and just one damage item, Tankshka was nerfed to be an ineffective support, but still excelled as a tanky jungle bruiser. Ardan was the natural support of choice because of how effective the Pouncy Fun + Vanguard combo is. Koshka pounces into the middle of the enemy team and Ardan immediately follows up with a Vanguard for a team slow. Nowadays, this still works very well, and Ardan’s early-game damage complements Koshka’s early aggression.

Krul works very well with Ardan. AdyEndrus, who we all know as the Krul player, has always loved being supported by Ardan. Not hard to see why. Ardan compensates for Krul’s main weakness (a lack of stickiness) and gives Krul easy pickings on anyone caught in a Gauntlet.

Reim is fantastic with Ardan. His slow base move speed means that he gets a lot of mileage out of Vanguard, which can help enormously in catching up to enemies only to slow them with Reim’s heroic perk, Frostguard. Additionally, Gauntlet can aid in landing massive Valkyries and makes it easier to land Winter Spires.

Rona is similar to Krul. That Vanguard is fantastic for allowing Rona to build BP stacks (if she has the item) and stick to enemies more easily. Additionally, since Vanguard applies an AoE slow, Rona’s Red Mist is a fantastic follow-up for massive AoE damage while everyone is still affected by the slow from Vanguard. Gauntlet also sets up huge Red Mists.

Skaarf is similar to Celeste in that Vanguard’s peel is amazing for this squishy mage. Gauntlet is, of course, fantastic for him to simply float outside of and poke into with Spitfires. There is one more thing, though: Skaarf’s ultimate, Dragon Breath, deals damage over a huge area – in fact, almost exactly the area that Gauntlet encloses. This wombo-combo has been affectionately dubbed the “Pressure Cooker.”

Skye synergizes extremely well with Ardan. When kiting with Forward Barrage, Ardan can make this even easier with a Vanguard. When Skye wants to dive aggressively into the enemy team with a Suri Strike, Ardan is instantly by her side, supporting her Vanguard. Gauntlet and Death From Above are two of the strongest zoning skills in the game, and can easily force someone into a corner or force them to eat a stun.

Vox has strong synergy with his father. If Vox is going a CP route, a Gauntlet provides an excellent environment to deal massive AoE damage with Resonance and Wait For It. If Vox is going WP with a Breaking Point, Vanguard allows Vox to build more BP stacks by giving him extra survivability. Additionally, a Vanguard followed up by Sonic Zoom provides excellent peel.

Glaive has mild to strong synergy with Ardan. As a tanky melee who sometimes has trouble sticking, he benefits from Vanguard. There is also the obvious combo potential of using Afterburn to knock someone into a Gauntlet wall (the Pinball Machine) or using Vanguard on a Glaive who just Afterburned to help them chase. However, Ardan lacks the single target focus that really makes Afterburn shine.

Kestrel synergizes reasonably well with Ardan. Ardan can peel for her and Gauntlet allows her to poke from the outside with her A. However, Ardan’s lack of single-target focus for her Weapon Power path keeps them from synergizing strongly.

Ozo has mild synergy with Ardan. Vanguard helps Ozo stick to enemy targets, and if the slow lands on multiple enemies, can also set Ozo up for huge AoE damage with Acrobounce or Three-Ring Circus. The same is also true of Gauntlet – trapping enemies in the arena can be followed up with fantastic AoE damage, and also has huge combo potential with an Acrobounce on an escaping enemy.

Petal is a fantastic kiter. Because she already has so much kiting power built into her kit (knockbacks, a jump, a slow on the ult, and a slow from Frostburn), Vanguard’s speed-up and slow, though useful, are pretty redundant. Catherine is usually a better choice with Petal as a jungle duo because the hard CC offers something that Petal doesn’t already have. Nevertheless, Vanguard is never bad with a squishy carry.

Ringo is another fantastic kiter, and Ardan’s kit is generally less redundant for Ringo than it is for Petal. However, Ringo doesn’t have strong synergy with him because Ardan lacks something to really enhance Ringo’s single target focus and damage, unlike Adagio, Fortress, or Cath.

SAW has mild synergy with Ardan. A Gauntlet keeps fights near a spun-up WP SAW, and Vanguard helps with SAW’s horrible movement speed and survivability. However, a CP SAW doesn’t receive as much benefit as a WP SAW does from Ardan.

Taka typically has an aggressive playstyle that involves diving into the enemy team, auto-attacking a few times until he kills someone or is low, then stealthing away and coming back to finish the job. Vanguard facilitates this a bit by keeping Taka alive, and trapping an enemy in a Gauntlet with a fed Taka typically doesn’t end well for that person. However, Ardan is probably better as a support for tankier melees who aren’t just in-and-out.

Joule doesn’t synergize positively or negatively with Ardan. Joule does get some protection from Ardan’s Vanguard, but if Joule is in the middle of things, she’s probably just hopped on top of and stunned someone and will burst them down quickly, in which case Vanguard doesn’t get too much mileage. Catherine is pretty clearly the better choice as a support for Joule.

From this analysis, we can see why Ardan has been such a staple in tournaments lately. Because Ardan doesn’t have any particularly weak spots in his power curve, he doesn’t have negative synergy with early- or late-game carries. His kit synergizes positively (mildly or strongly) with practically every carry in the game, making him a universally good support pick.

I hope this article was helpful! If you haven’t yet, give the Fortress and Catherine support synergy articles a read as well. See you next time!

Welcome to the Bungle