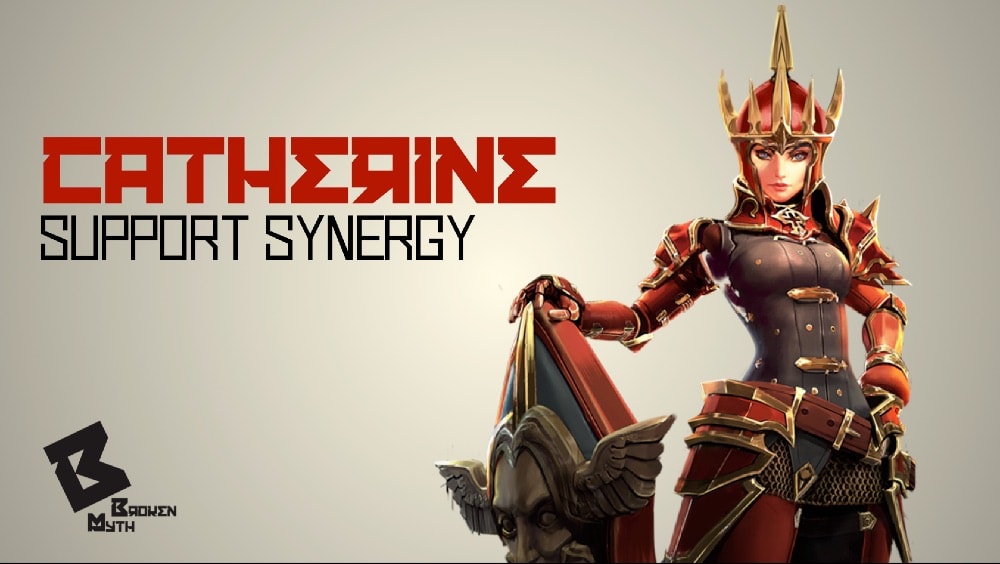 Welcome back to the Support Synergy series! In case you didn’t know, this series is all about analyzing supports and who they synergize with. This will help you choose which support you want with which comps, even in solo queue! The previous article analyzed Fortress. Today, we’ll be looking at Catherine.

Catherine used to be an extremely popular support. She fell off for a bit after Ardan’s release due to her “reliable” stun reliably bugging out on you at the worst possible times! However, after that bug fix, she was a force to be reckoned with, with a powerhouse of a kit. Since then, we’ve seen her in the meta several times, in the form of pure support Catherine and semi-carry Contraption Catherine. However, she’s been hit with several nerfs to her stun duration, which have impacted her significantly. This, in combination with a meta focused more on an aggressive early game, has seen a rise in Ardan and Fortress’ power, and a fall in Catherine’s. Despite all this, she’s still a great choice in certain situations! Let’s get into it.

What Catherine Does Well

Heroic Perk: Captain of the Guard

Catherine’s heroic perk gives her +1 Armor and Shield for every time she stuns or silences an enemy.

Catherine’s A buffs her movement speed temporarily and also stuns the next enemy she auto attacks (excluding turrets and Kraken).

This skill creates a reflective bubble around Catherine that does continuous AoE (area of effect) damage around her and also deflects damage over a threshold based on her level.

Blast Tremor silences enemies in a cone in the targeted direction.

So, to summarize, Catherine has:

As we can see, Catherine has a kit that focuses on applying status effects to her enemies . This makes for fantastic engagements if her kit is used correctly.

Unlike Fortress, she does not rely on damage to support her team and has plenty of hard CC (crowd control) in her kit with her stun and silence. Though Stormguard is often used to deal damage, the vast majority of this skill’s damage comes from her enemies dealing lots of damage, unlike the rest of the skills in the game, which are more geared towards the player themselves building offensive items. It’s also important to note that Stormguard gives Catherine a lot of tankiness against heroes with damage that comes in large bursts, such as Celeste, Skaarf, and Ringo.

Because Catherine has two skills that apply CC, and one skill that gives her tankiness while dealing damage that scales with enemy damage, Catherine is, unlike Fortress, not reliant on leveraging her base damage to snowball the game into a win. She scales well into the mid- and late-game and can mount comebacks, which isn’t usually seen with support Fortress.

Catherine lacks early-game damage. One of her biggest (and only) weaknesses is the fact that she doesn’t have the high base damage of other supports. Because of this, Catherine takes a while to ramp up, relying immensely on her teammates to do damage for her. In the early-game, no one really has enough damage (yet) to take advantage of Catherine’s stun to burst someone down and delete them, and her shield reflections suffer because none of the damage in the early-game is actually high enough to reflect a meaningful amount of damage.

Catherine’s stun works extremely well to isolate an enemy when followed up by either high burst damage (to delete them) or another stun. Her stun can also be used to help her teammates land skillshots more reliably. For this reason, she has strong synergy with other stuns, burst damage, and skillshots. Merciless Pursuit is also an excellent peel, giving Catherine mild synergy with squishy heroes. Her silence works extremely well when coordinated with channeled ultimates. A channeled ultimate is often negated by using skills or items to either stop the channel, blocking the ultimate, or simply moving out of it. However, Catherine’s silence negates enemies’ ability to use skills to stun someone out of an ultimate, a Reflex Block to block an ultimate, or even using Boots or a Warhorn to run away from it. As a result, Catherine has strong synergy with channeled ultimates. You will see examples of this down below.

So who does Catherine synergize with?

Celeste has strong synergy with Catherine as a laner. A Merciless Pursuit not only makes it easier for Celeste to land her Heliogeneses, but it’s also a fantastic stun to chain into a Core Collapse to keep your target out of the fight. As a Mage, Celeste often builds heavy crystal but little defense, leaving her fairly squishy. Catherine is excellent at peeling for her against melee heroes.

Joule works very well with this Stormguard agent for the same reasons she works well with Celeste. Dat chainstun though! A Merciless Pursuit followed up by a Rocket Leap followed up by a few auto attacks and Thunder Strikes means that enemy is wiped off the face of the Fold.

Petal has strong synergy with Catherine. Petal’s huge early-game damage makes up for Catherine’s weak early-game, and Catherine’s peel in addition to Petal’s seed knockback and jump can make it almost impossible to catch up to a Petal as a melee.

Ringo is great with Catherine. As a laner, a proficient Ringo will pick up a Tension Bow in under 4 minutes. A Merciless Pursuit onto a squishy enemy followed by a quick burst from Ringo and possibly your jungle carry will make short work of them before they can even react. In addition, Ringo’s Achilles Shot can make it easier to mercilessly pursue a fleeing enemy. Catherine’s stun can also be used to protect the squishy sniper from an enemy jumping on to him.

Skaarf is very similar to Celeste in that Catherine supports him as a squishy lane Mage very well. A stun all but guarantees a Spitfire landing on your target. Additionally, Goop deals enormous damage over time. Stunning a squishy carry in a flaming goop puddle is often a death sentence for them. Additionally, the silence from Blast Tremor can prevent enemies from stunning Skaarf out of his ultimate or using boots or a warhorn to run away from it.

Skye is great with Catherine. A stun can guarantee hitting the entire length of a Forward Barrage unless body blocked, which can be absolutely devastating if none of it misses. The stun can also be chained into a second stun from Death From Above, which also does a respectable amount of damage over its duration. As a squishy, Catherine’s stun is also a fantastic peel against melees.

Glaive has mild synergy with Catherine. Glaive’s Afterburn is extremely deadly as a tool for punting an enemy out of position, marking them for deletion. What makes this deadlier? After a punt, a follow-up stun by Catherine to make that enemy regret all their life choices. However, Catherine does not provide much protection for Glaive as a melee hero, so they they don’t quite have strong synergy.

Kestrel can combo well with Catherine. A Merciless Pursuit into a One Shot One Kill is a hell of an engagement! However, Kestrel is similar to Skye in that her skillshots can be body-blocked by an enemy support because they need a clear line of fire. Unlike Skye, however, Kestrel’s mid-fight repositioning is not effective enough to really guarantee landing a skillshot on a squishy carry, so Kestrel is much more reliant on her support to zone the enemy support out of the way of body-blocking shots. Catherine is not too effective at this, and thus can’t really prevent the enemy support from body blocking Kestrel’s skillshots.

Taka has mild synergy with Catherine. Taka’s upfront 1v1 damage is incredible, and in combination with a stun, can often delete an enemy hero before they can react. This jungle duo does suffer a bit from not having much early game power, but Taka’s ability to stealth into the enemy’s jungle and steal farm mitigates this a little.

Vox and Catherine have decent synergy together. With double silences, they can keep enemies from using items and skills for what seems like an eternity. Additionally, Merciless Pursuit into a Sonic Rush combo can peel for Vox very well. However, because Vox and Catherine both have weak early-games, it can be tough for a team with both Vox and Catherine to keep control of the map until the late-game.

Blackfeather has neutral synergy with Catherine. Like Krul, Blackfeather is  weak early game, and Catherine doesn’t make up for this at all. In the late game, Catherine can’t protect Blackfeather. Additionally, her stun isn’t too useful for locking someone down for Blackfeather to target because his kit includes a slow as well as a dash and a team speed-up.

Koshka is not very strong with Catherine. Koshka’s main strength is snowballing the early game with her insanely high base damage, but Catherine doesn’t facilitate this very well because she lacks early game damage and protection for Koshka. Although a stun into a Koshka’s Yummy Catnip Frenzy does count as a chain-stun, Koshka’s stun alone is usually enough for deleting a carry; the extra stun from Catherine is often not necessary.

Krul has neutral synergy with Catherine. Catherine’s stun helps immensely with Krul’s main weakness late-game, a lack of stickiness. However, since the two do have rather weak early-games, they have neutral synergy.

Rona doesn’t have much positive synergy with Catherine. Rona’s strong early game isn’t enhanced in any way by Catherine, and other than a silence leading into a Red Mist, Catherine doesn’t do too much to support Rona in late game teamfights.

No one! Catherine doesn’t have negative synergy with anyone. Reliable CC does not impact any carries negatively, and her weak early game is not enough to push her to synergize negatively with anyone.

We’ve certainly seen a lot of Catherine with Joule and Celeste, one of VON Menace’s favorite team compositions. Despite having strong synergy with so many heroes, Catherine currently isn’t a favored support because her A has been nerfed several times, maxing out at a stun duration of 1.2 seconds instead of the comparative eternity of 1.75 seconds.

I hope this article was helpful! If you haven’t yet, give the Fortress support synergy article a read as well. See you next time!

Win the Fortress Reindoge skin! Are you nerd enough?