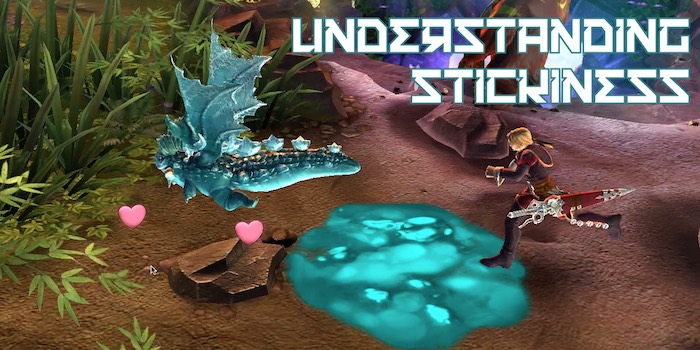 The word “sticky” is often thrown around in reference to heroes or items in Vainglory and other MOBAs. You may have seen us use the term here. However, there’s a huge lack of actual explanation as to what stickiness is and means. We hope to clear that up with this article.

1. Keeping an enemy close.
2. Keeping up with an enemy.

But wait – aren’t these the same thing? Well, not really. They refer to two different mechanics that both get wrapped up in an umbrella term of “stickiness.”

Keeping an enemy close means actively using status effects to make them stay next to you. This includes all types of CC – stuns, slows, silences (which prevent them from using boots or skills to escape), or displacement skills that push or pull.

Keeping up with an enemy means that you are using your kit not to keep the enemy from running away, but that you are moving towards or with them. This includes gap closers and speed boosts. Depending on how a pull is used, it can also be put in this category – a pull that pulls all three enemies into your teammates effectively gap closed for your team, albeit more aggressively than a normal gap closer.

Here are some examples that may be helpful. (We’re not going to go over every hero, because that’d take forever). The numbers (1) and (2) refer to what we just described above!

Ardan – Ardan is widely regarded as one of the best support choices for improving an ally’s stickiness. Vanguard is a gap closer for himself (2) as well an AoE slow (1) and speed boost for an ally (2). Blood for Blood, is a gap closer (2) that can apply a Shiversteel slow (1), and Gauntlet, is a gap closer (2) that forces enemies to stay in an enclosed area (1). Ardan’s Vanguard is one of the best skills in the game for helping a melee ally stick more effectively. You can read more about it in our Support Synergy article on him here!

Blackfeather – If you’ve ever played against a good Blackfeather, you know precisely how annoying he can be. As one of the stickiest heroes in the game, it’s extremely difficult to peel him off of yourself. Blackfeather’s Feint of Heart provides a speed boost and is a gap closer – it’s a double whammy of (2). On Point is a slow (1), and his Rose Offensive is another gap closer (2) that can be activated twice in quick succession if necessary. But wait! That’s not all – Blackfeathers also often build Shiversteel, which adds another, more consistent slow to his kit (1). It’s not hard to see why he’s so dang sticky.

Fortress – Fortress is a hero that helps his allies stick a little more. This is due to Truth of the Tooth, which is a gap closer (2) for himself and a team speed boost (2) towards a target, which helps his teammates gap close as well. He has a delayed slow (1) on Law of the Claw, which can also be triggered through his wolves’ attacks from his ultimate. Aside from this, Fortress doesn’t offer much in the way of CC, so it’s important for his ally to be able to either burst the target down or have decent stickiness themselves.

Krul – Krul has long been regarded as extremely strong, but only if he can stay on top of his target. The best Krul players know how to manipulate the undead viking’s skills and items to best stick to an enemy. Shadows Empower Me gives him amazing stickiness at the beginning of a fight, giving him both a speed boost (2) and a slow (1). However, once the slow and speed boost from his perk wear off, Krul is extremely vulnerable to being kited. Dead Man’s Rush is a small gap closer (2) that can also be used to apply a Shiversteel effect (1). Lastly, From Hell’s Heart, is a stun and a slow (1).

Reim – Reim is known as an easily kiteable hero, so long as he’s not already on top of you. This is due to his low base move speed – 3.1, the same as Ringo and Skye, but without any move speed bonuses. For comparison, the average move speed of melee heroes is 3.36, and the average for ranged is 3.19. Without any gap closers, it’s obvious that Reim has a lot of trouble catching up to enemies. However, he has plenty of CC in his kit – every auto-attack applies a decaying slow (1), thanks to Frostguard. Chill Winds can root enemies (1), literally holding them in place, and his ultimate, Valkyrie, can stun or slow, depending on how it’s placed.

Koshka and Taka both have gap closers and speed boosts (2), but other than Koshka’s Yummy Catnip Frenzy, lack CC. Glaive has a fantastic gap closer which gives him a small temporary movement speed bonus (2) as well as a knockback effect (1), but otherwise is easily kiteable. Ozo has three gap closers (2) in his kit, a slow (1), and a stun + knockback (1). Phinn has no gap closers, but has a stun/slow (1) and two pulls (1).

If we’re talking about stickiness, we should also talk about what enemies do to escape. These escape mechanics include:

3. Keeping an enemy away from you.
4. Staying away from an enemy.

These are analogous to the (1) and (2) that we went over above – (3) includes CC effects, and (4) includes repositioning tools, movement speed bonuses, and just good positioning in general. For most squishy heroes, good positioning involves staying on the edges of a fight as much as possible while still doing damage.

Here are a few examples:

Petal – Like other squirrel/plant eco-terrorists, Petal is incredibly hard to catch. Brambleboom Seeds knock enemies back when they walk on top of them (3), so a good Petal will place seeds down on her retreat in the enemies’ way to prevent them from getting on top of her. Additionally, she also has a fairly long-ranged jump (4) in Trampoline!, so on the off chance that an enemy does get close, sayonara! Her ultimate, Spontaneous Combustion, also heavily slows enemies (3). Petals also frequently build Frostburn, which applies a slow to an enemy when they receive crystal damage (3).

Ringo – Ringo is typically known as the kiting king, and for good reason. He has a slow (3) from Achilles Shot, which helps keep enemies at arm’s length. A movement speed bonus (4) on Twirling Silver further increases his kiting capabilities. Using both of these, a proficient Ringo can often whittle bruisers down in health before they can even get on top of him.

Vox – Widely regarded as an extremely slippery hero, Vox’s Sonic Zoom is a dash (4) on a very short cooldown. This can be used to rapidly reposition himself – it’s typically used as a tool to kite his enemies with – as well as build up a gap between an enemy and himself over time. He also has a mild slow (3) on Pulse.

Skaarf and Celeste are both squishy mages that want to poke their enemies down from afar. As such, they rely on positioning on the edges of a fight to drop stars and launch fireballs while staying safe, but they both have CC in Goop and Core Collapse (3) in case the fight comes to them. Skye has a speed boost on every auto-attack (4), a repositioning skill (4), and a stun/slow on her ultimate (3). CP Skye also often buys Frostburn (3), which allows her to kite extremely effectively with Forward Barrage.

How to Apply This

Understanding how to effectively use the elements of stickiness available in your kit is extremely important in improving your play. As a melee hero, it’s sometimes better to save your gap closer for after CC effects or repositioning skills are used. If you use your gap closer before the enemy uses their repositioning active, you could very well be left in the dust if you don’t have a way to keep up.

For example, let’s say you’re on Koshka vs. a Skaarf. If you use your Pouncy Fun gap closer to immediately jump onto a Skaarf, he can easily put a Goop down under you to slow you and use his boots to run away. If you instead use your movement speed boost from your heroic perk to engage, the Skaarf may put a Goop down, but this time, you have your A available to pounce on top of him, out of the goop.

Similarly, it’s often very effective to stagger your CC effects or gap closers. A Krul should always engage with his heroic perk if possible, because it offers both a gap closer and slow in one. However, one mistake that beginning or intermediate Krul players often make is engaging with their heroic perk, Shiversteel, and Dead Man’s Rush all at once. This creates redundancies in both the slows and gap closers. It’s actually best to engage with his heroic perk alone, then, once the effects of the perk wear off, use your Dead Man’s Rush as a gap closer to apply a Shiversteel slow, or if they’re too far away, use your ultimate to buy you enough time to get in close.

Adding to your kit

Aside from items, a roam hero’s kit can also help you improve your own stickiness or escapes. For example, Reim lacks mobility (2), but Fortress makes up for this with his team speed boost and Ardan can speed Reim up. Fortress and Ardan also help other melee heroes such as Krul, Blackfeather, Koshka, etc., stick better.

We hope this article was helpful!

The Future of Roams in Vainglory – Upcoming, Dramatic Changes for the Role