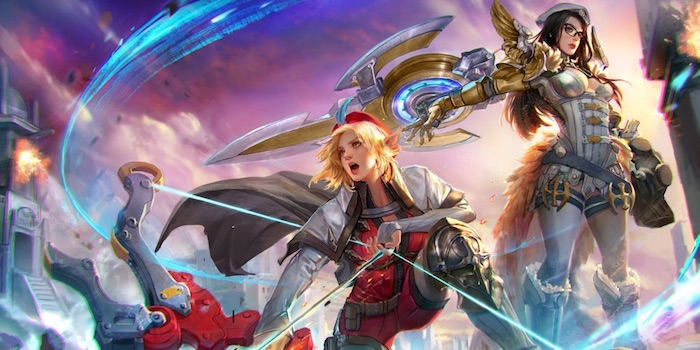 It’s been a wonderful holiday season and we’ve enjoyed update 1.12 for over a month. Now, Update 1.13 is upon us and packed full of content that everyone will love. We’re taking a new approach for this review, rating each change on a five star rating system. Without further ado, let’s jump right in.

The competitive scene has truly come a long way, from the first organized tournament with about a $100 prize, to the latest VIPL2 with a $33,000 (40M KRW) grand prize. I want to send a HUGE congratulations to Ardent Alliance (VIPL / International Champions)!

REim is a tanky mage hero that excels at slowing down his prey. His tankiness is derived from his heroic perk, Frostguard. Reim deals bonus crystal damage over time (two seconds) on his auto attacks, and 50% of that damage is added as fortified health. This is a new mechanic. Fortified health absorbs 50% of all incoming damage until it is depleted. On top of that, his auto attacks also chills and then slows targets by a whopping 60%!

Another new mechanic is introduced by Reim’s B ability, Chill Winds. This does AOE (Area of Effect) damage and causes enemies to be rooted in place. You can’t move, but you can still use abilities or attack things in range. Reim’s A ability, Winter Spire, is an aimed skill shot that also deals AOE damage, and grants 35% of damage as fortified health. It has a pretty nice range (up to 7.5m on overdrive), so landing it can be very rewarding.

Lastly, his ultimate, Valkyrie, summons, well, a valkyrie, that drops down and slams everything in a circle for massive amounts of crystal damage, stuns, AND slows by up to 80% on overdrive.   Definitely build him CP (crystal power), and enjoy turning your opponent’s movement speed into Phinn’s. Did you see his afterburn? Oh my god. Baby Bahamut Skaarf with icy flames and frozen lake pools. What’s not to like? See him in action here. She’s undoubtably beautiful, and I’m totally digging the glasses. The in-game model has some great effects like the movement on her shield. However, it gets four stars from me because it’s a little too similar to her normal model. Her effects are also similar to Tier III Paragon Catherine, just a different color. Check out the in-game here. Wow, what a beautiful map. The snow began to fall around Christmas, and now it’s a fully fledged winter! It took three months to make this map, and it shows. The level of detail blows my mind. Make sure to take it for a spin in practice mode and discover all the little easter eggs! Great job, evilontheinside!

Bravo, SEMC! Having learned from Autumn season’s compression experiment, they’re starting the new season differently this time. Instead of compressing Simply Amazing ~ Vainglorious into one skill tier, everyone’s “trophy” will reset. However, you now have a hidden MMR (Matchmaker Rating) that will determine who you play against. Win often, and you will rocket up the skill tiers. This is actually very similar to how it works for players who enter casual queue and grind up to level ten before entering ranked queue. Love it!

Fixed the Book of Eulogies Bug! This was game-breaking. In lane, Blackfeather could go from 10% health to full by exploiting this bug. They also fixed a bug with his rose trail not granting movement speed bonuses to allies. His base health was also reduced significantly across the board. This will make it harder for him to reach his peak strength late game. On Point will now deal full base damage to minions, but the CP ratio is reduced. All in all, I believe these changes will put Blackfeather where he belongs. A difficult to master hero, but incredibly strong for those who do.

Kestrel is incredibly strong early game, especially her Glimmershot. Damage for this ability was not changed against heroes, just lane minions. Then, they increased the early game damage for One Shot One Kill.  She has the fastest level one jungle clear and I believe she’ll continue to be a snowball hero and lane bully. She’ll most likely need some more balancing to find her happy place.

With Skye in the meta, Petal was practically useless. To fix this munion issue, they now have health again. No longer will her pets instantly die to one Forward Barrage. They count as lane minions, which means the reduced damage to minions will apply. As before, minion candy will not affect them. My sincere hope is that this change allows for more Petal play. I just want to show off my holiday skin.

The first thing I noticed when watching VIPL, was how incredibly fast MICSHE and druid would clear a minion wave with Skye. A single Suri Strike and the entire wave died. This allowed Skye to do other things instead of spending time farming in lane, such as rotating into the jungle. While much of Skye’s power comes from this fact, she still does incredible damage with her A ability due to the 18% scaling ratio with target lock. Add the fact that she seems to be balanced with the notion that you won’t land all your skill shots and she simply does too much damage. We will see if this change was enough. I hope it was, but I’m doubtful.

There was a bug where Scout Traps did not reveal other Scout Traps in a bush. It has been fixed. Hurray!

Flares now properly provide a ring of vision starting from the point of origin. This ring is now clearly indicated on the map! No more guessing.  We are still investigating how this interacts with bushes and fog of war. Data is still inconclusive.

The minion miners have been changed! They have significantly more health, and taking one miner no longer pushes lane. Instead, they increase the damage and defense against heroes and turrets only. This means that lane minions will be harder to last hit, as well as deal more damage when the wave pushes into the turret or the enemy laner gets aggro.

For that reason, I’m on the fence about this change. This fundamentally changes a large aspect of laning (if one miner is taken). We’ll have to see how it plays out.

At a glance, the patch notes may seem kind of short, but this was still a large content update. I can’t wait to try Reim, and the new Catherine skin.  One of my criticisms of previous updates was that they made too many balance changes. I like this new approach of changing a few things and seeing how things shake out.

The Top 5 Plays of the VIPL2 World Finals