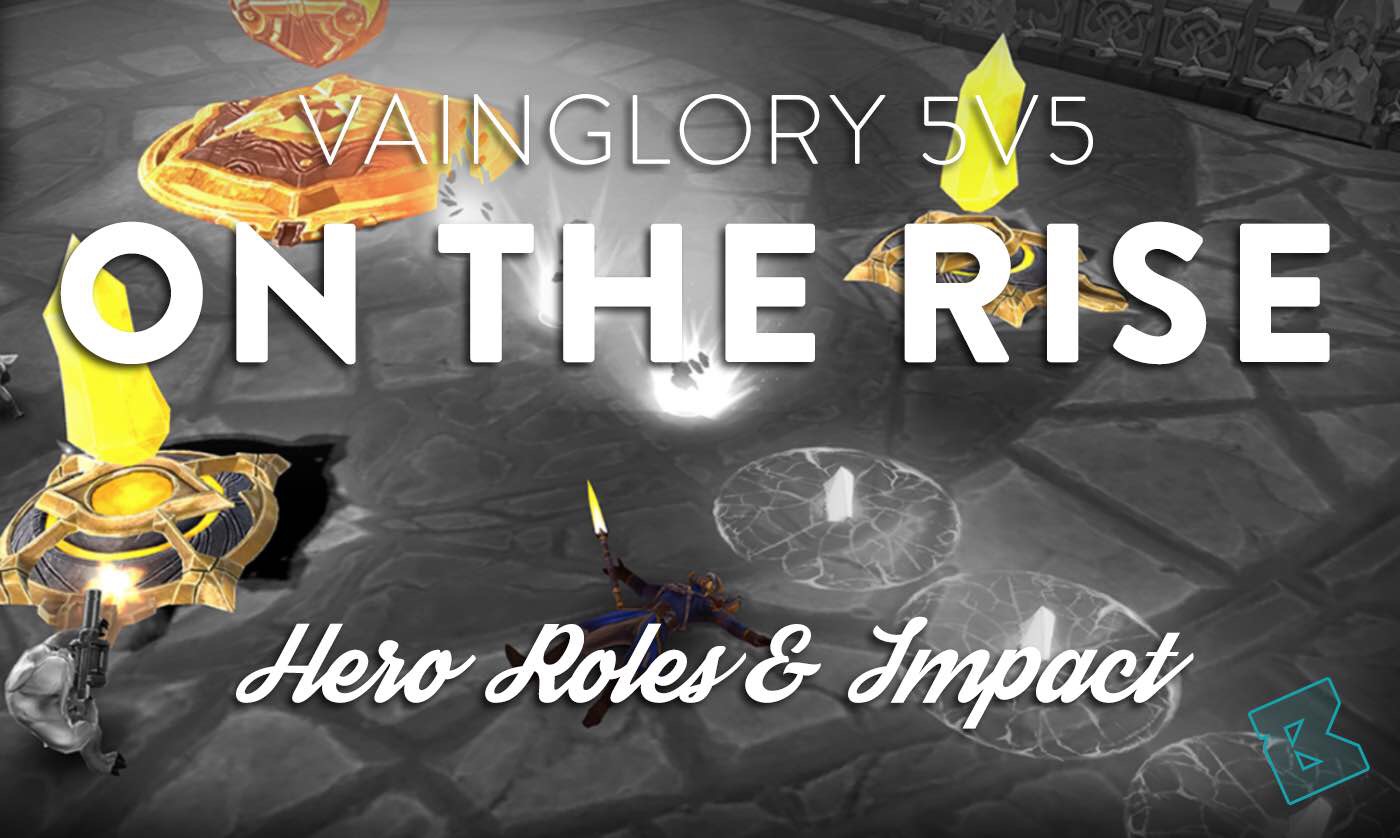 With five heroes on your team, strategic diversity in Vainglory is considerably opened up, and it is likely that many different team compositions will turn out to be viable. Which comps prevail will depend in part on gold and experience sources, map objectives, and the overall synergy of the composition. The broad principles involved in putting together the successful compositions played at the Worlds 2017 show matches consisted of a strong ranged CP and WP carry, a jungler who may be CP or WP, a more tanky and utility-focused laner who built opposite item trees of the jungler, and a captain who synergized well with the composition. Let’s take a look at Vainglory 5V5 hero roles and which heroes perform best in the new game mode.

Given the greater number of targets, heroes with Area of Effect basic attacks or abilities have an increased impact. Likewise, given the larger map, higher mobility, escapes, and stealth have a greater impact as well. While those are core principles to follow, many different composition types may work well; from running double captain, two semi-captain, or semi-jungle, to drafting everyone as a dive or crowd control comp. Having 3 lanes also opens up who can be viably run as a laner.

Furthermore, you can juggle the pressure of all three lanes, so it is not as important to control all lanes as it is in 3V3. For example, this is why Baptiste was run as a top laner by Renegades — something you rarely see in 3V3. Likewise, Taka can be a fairly effective top laner since he can invade the enemy jungle frequently, and potentially even proxy farm (take the enemy minions between two of the enemy turrets, preventing them from meeting the opposing wave) with relative impunity.

Why is this? It’s largely dictated by the map design and objectives. The CP buff camp on your side is right next to mid lane. Having a CP hero in Mid makes this quite an efficient objective to control since they do not have to travel far, and also places further pressure on the opposing mid laner. Having fast clear is impactful, allowing the mid laner to rotate quickly. Likewise, the WP buff camp is in bottom jungle, which you typically want your bottom laner or jungler to have easy access to. The captain plays from Mid because of its strategic importance (a common statement in 5V5 MOBAs is Mid wins games), but also because of how the speed buff on Blackclaw Rush functions. If you are in Mid, you can rotate up or down rapidly to relieve pressure.

Having top lane played by a more robust hero with plenty of sustain is useful because this is usually the lane that faces the greatest pressure, due to how the mirrored map works. A side’s top laner effectively plays against B side’s bottom laner, and vice versa. This leaves the top laner at a disadvantage in two ways. First, the bottom laner often has a WP buff to out-DPS the top laner. Second, because of the Gold Toad, the jungler is more commonly in the bottom jungle and more likely to gank the enemy top lane.

Interestingly, in early game the most impactful roles are jungle, captain and then mid laner because they each have the ability to control and dictate the tempo of the game with their rotations. As the game progresses, Mid and Bottom increase in importance as their damage ramps up, whereas Top is often an “unsung hero,” whose movements and utility control the outcomes of fights in subtle ways.

These groupings will obviously shift as balance changes are made, but right now, here are some heroes who seem likely to be strong in each of the roles. Order of heroes is approximate.