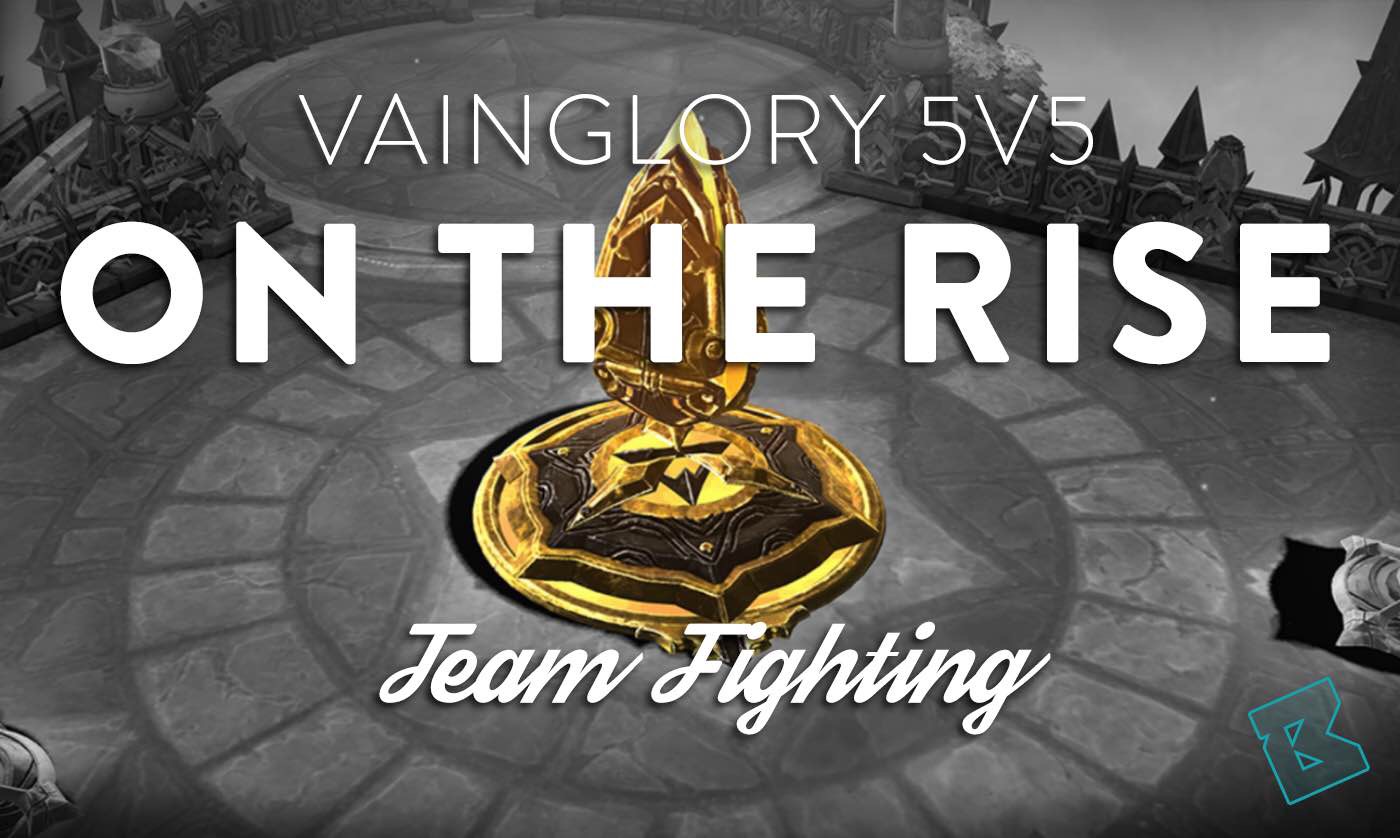 The Vainglory 5V5 late game is all about taking decisive team fights to end out the match. Once two rows of turrets have fallen or both dragons are on the map, split pushing becomes a dangerous tactic. In order to succeed in accomplishing a split push, you must traverse deep into the enemy territory, and there is much less travel time needed for them to switch to your location. While strong split push heroes can still be utilized to take down lanes, it becomes a risky stratagem to employ — if you are caught out, your opponent is provided with a numerical advantage for the duration of your death timer. Then, the team typically begins to roam the map as one unit, looking to either steal an objective, push through one, or acquire the perfect engage to win a team fight.

At this stage, all heroes are typically fully leveled, and several heroes will be fully built in terms of equipment; thus, gold and experience differences have a reduced impact. Heroes boasting late game power spikes will be shining, while early game heroes will often be falling off from their reign. So, how should you set up that glorious team fight?

In war the victorious strategist only seeks battle after the victory has been won, whereas he who is destined to defeat first fights and afterwards looks for victory.
— Sun Tzu

Ideally, you want to set yourself up with a significant advantage prior to the battle. Preparation is the key to success. Again, advice from Sun Tzu is helpful:

Numerical weakness comes from having to prepare against possible attacks; numerical strength, from compelling our adversary to make these preparations against us.
— Sun Tzu

Manipulate the map to prevent the enemy from concentrating against you. This can be done by picking off an enemy or two, utilizing feints to pull heroes out of position, pushing in waves of minions so that someone has to defend against them (especially if you used Minion Candy), or taking an armory in a lane to force attention toward its location. If you can establish some or all of the above, then you are prepared to take a team fight.

This can be started in one of three ways:

If you feel your team is much stronger than the opposition, you can force them to fight you by attacking their remaining turrets, armories, or Vain crystal as a group of five. Remember that this exposes you to the risk of losing the battle against their defenses.

If you feel you have a momentary advantage or high vision control of their likely approaches, you can start up either dragon to force a fight. However, you must be careful with this sort of bait, as your team will take damage from the dragon. Additionally, a steal can be utterly devastating and place even a team that was dominating instantly onto the back foot.

The safest engage is dueling in the middle of the map without an objective in play. This is also the easiest for either team to disengage from if they feel like they are not winning the fight. Come prepared to try and shut the enemy down fast if they initiate a disengage.

5V5 team fights are an interesting beast due to the sheer amount of crowd control and damage that is available to teams, transcribing them to be navigated differently than a 3V3 fight. You must pick your targets carefully and poke as much as possible before the hard engage. Rather than the melee jungler initiating the fight by diving in, you want several heroes engaging at the same time or to stand back and poke until an enemy can be caught out of position or peeled off. If someone dives in by themselves, they will typically be the focus of the damage and crowd control of all five enemies, and few heroes are tanky enough to survive that for more than a second. Instead, the melee heroes often front line to protect their ranged heroes or lurk at the side of the fight in attempt to flank or peel off an enemy.

You are much stronger if you fight as one unit rather than as individuals; this means focusing on the same target and, if possible, chaining crowd control on them. It can be worth thinking in terms of interlocking sub-units performing different roles in the team fight. For example, a Baptiste and Catherine may be front lining for the team while Celeste and Baron are poking from the back, whereas Glaive prowls at the side of the fight — prepared to peel off an enemy, or displacing any opponent who gets through onto your back line. If you are on voice chat, decide before you engage what your main aim will be. Agree on the win conditions for the fight and when you will disengage.

One late game team fight can determine whether you win or lose the game depending on the outcome. Think carefully about who your priority targets are and how you will shut them down.