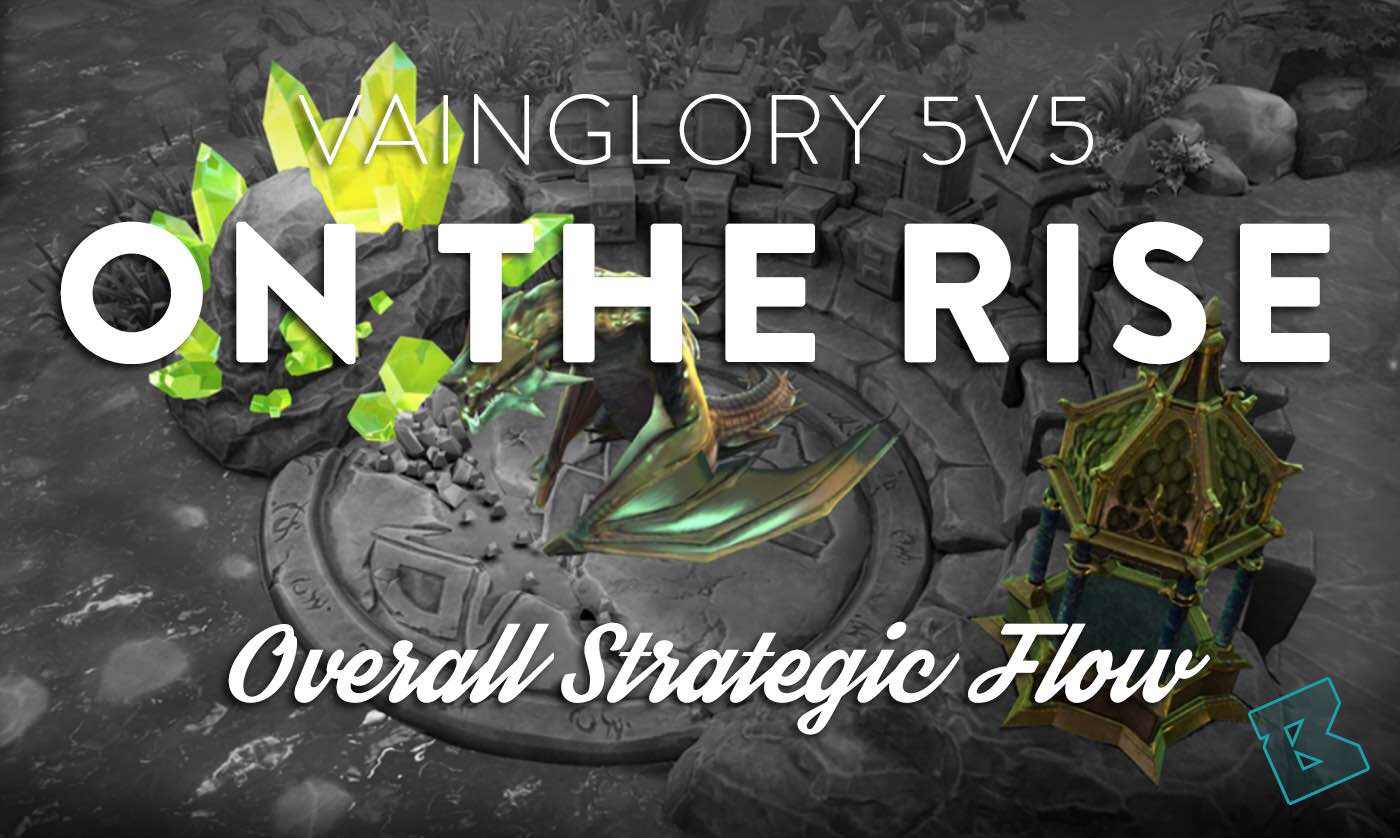 The 5V5 Sovereign’s Rise map for Vainglory opens up the game for in-depth strategy and tactics to be impactful in a way that rarely occurs on the Halcyon Fold map — largely due to the new proliferation of objectives and sheer space available. While cunning strategy sometimes prevails on the Fold (e.g. ACE Gaming’s masterful backdoor against Impunity in the semifinal matches of Worlds 2017), primarily what wins out is drafting and knowledge of your win conditions, combined with the mechanical prowess to execute those conditions better than your opponent. While these will still be extremely impactful on the Rise map, rotations, tactical play, positioning, objective control and focus, as well as overall team strategy just became so much more prominent than they were before in Vainglory.

This series will reveal some of the theorycrafting behind the decision making of Renegades that helped us win both matches (other than #JustSEAThings taking down the server at the opportune moment against TSM). In addition, the more general tactical and strategic decisions 5V5 offers. Keep in mind that this is very early days since it is based upon gameplay on what was an alpha build of Vainglory 5V5, put together through some weeks of PBE testing and a handful of pro-team scrimmages to prepare for the show matches. In other words — there are likely still many changes to be made by the balance team, and there is much to explore and learn here together. I look forward to learning from the rest of you, as the meta evolves from 2.12’s early access to the February public release of Vainglory 5V5.

This first article gives an overview of the 5V5 strategic flow. The next four articles will examine the hero meta and three main phases of the mode.

As the game progresses on the Sovereign’s Rise map, there is an ebb and flow to where the key locations, fights and objectives are as objectives are taken and strategic space opens up. Understanding this dynamic and, in particular, reacting to it appropriately is key to controlling the game — and thus winning matches in Vainglory 5V5.

Broadly, at the moment, 5V5 divides into 3 broad phases:

In the laning phase, the primary aim is to farm up; particularly your lane carries, especially if they are going to be late game hyper carries. Advantages are gained in this phase through rotations that maximize the gold income of your team, the strategic application of pressure on lanes by your jungler, the opposing jungler ganking and helping push lanes, and the rotation of your captain to both relieve and create pressure in lanes (never did the former designated “roamer” feel more apt).

This phase ends either once a team has lost all 3 of their first turrets, or at the 7:30 mark when Blackclaw swoops majestically onto Sovereign’s Rise. After the enemy turrets have fallen, simple pushing of the lanes becomes risky due to the space you need to move forward from the safety of your turrets to keep pushing the lane. In the case of Blackclaw arriving before turrets have fallen, the addition of a “neutral” objective creates a new point of contention that you must focus on.

In this phase, the aggressor is the team that has pushed down turrets taking the early game advantage or is assisting a captured Blackclaw. As an aggressor, your primary objective is to use the strategic space opened up by the absence of your opponents’ turrets. Aim to pull focus toward defense of one objective with disproportionate amount of force from your opponent to open up engagements on other objectives.

As a defender, your aim is to use the appropriate amount of force to protect the objective under threat in an attempt to force an engage you can win. Alternatively, you can take advantage of an enemy mistake to peel off an enemy and create a numerical advantage, catch their split pushers off-guard and remove them from the map, or take advantage of their focus on a particular objective to press another important objective.

This phase ends once enough turrets have been destroyed on either side that wandering as a solo hero (or even a duo or trio) becomes increasingly treacherous for all but the most mobile of heroes. Getting jumped on by all 5 enemies at once is not uncommon, especially at the 15-minute mark when Ghostwing joins Blackclaw. The buff that Ghostwing delivers makes it extremely dangerous for the enemy to contest a team fight — given that a team with the Ghostwing buff often gains game winning dominance. Making a mistake at this stage and giving over a free kill can completely throw the game.

The team fighting phase is typically the closing out of the game. Both teams tend to rotate and roam the map as a full contingent of five heroes, looking to engage in an epic brawl, where gaining a decisive advantage will allow the team to push to win. One hero with either high clear or excellent escape may focus other objectives, such as making sure the enemy minion waves aren’t pushing toward your turrets or attempting to take advantage of the enemy focus to furtively steal an objective. If neither team can hold enough of an advantage, this phase can involve a slow build up — trading backward and forward of the more important objectives and advantages, like the Dragons and Armories, until one team is in the position to close out the game and claim their victory.