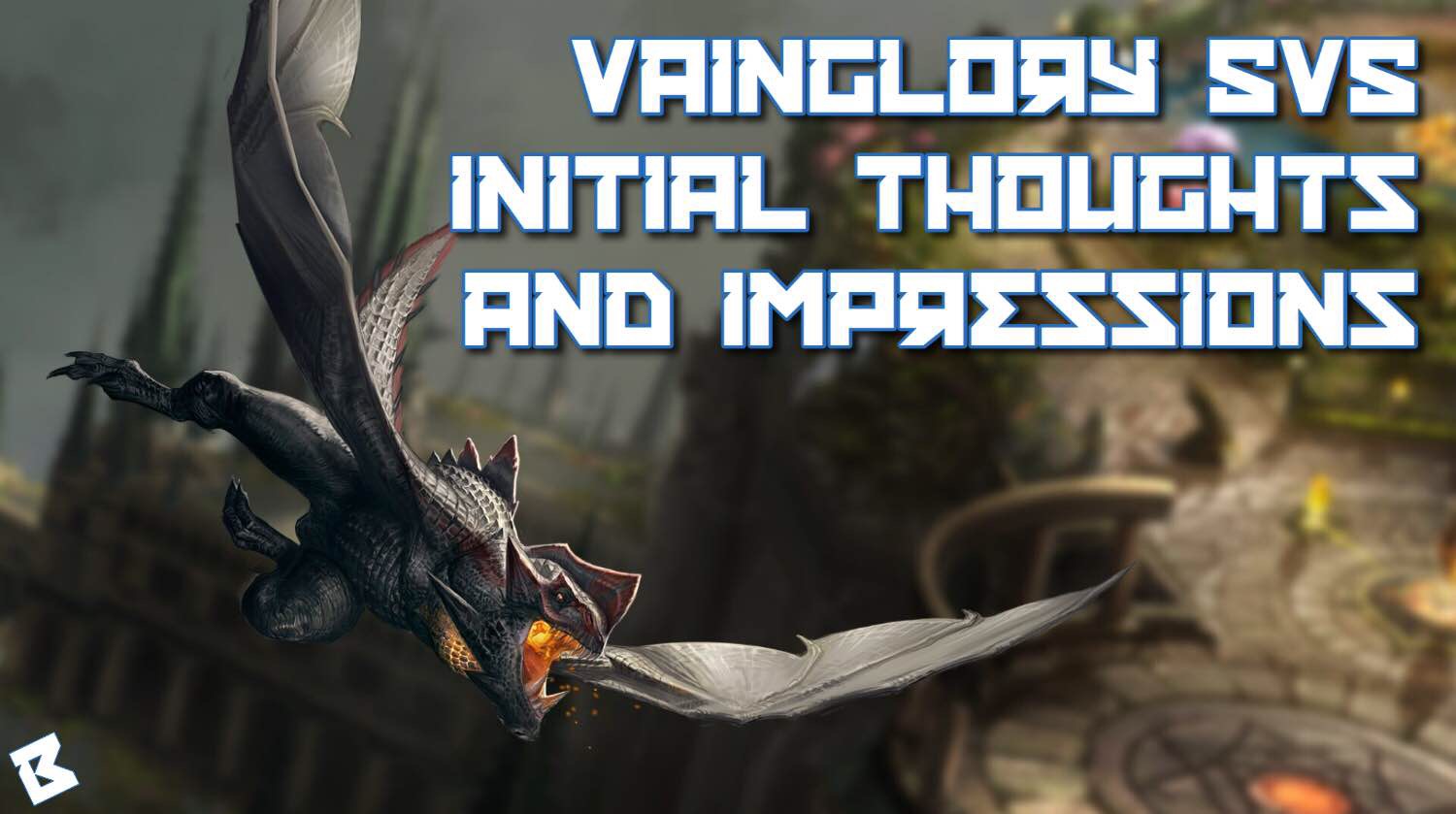 The Vainglory 5V5 unveiling sparked a multitude of reactions, theories, and analytical data. The new game mode marks the next step up in mobile gaming, and solidifies Super Evil Megacorp’s claim to “never settle for the lesser evil” through graphical standards and strategic gameplay delivered by their coined E.V.I.L. engine. We at Broken Myth wanted to share our initial thoughts and impressions on Vainglory’s largest milestone to date.

Disclaimer: The responses from each contributor were written based off of the Worlds 2017 show matches.

In 3v3, an individual player carried a lot of weight, for better or for worse. So, you could get a single person who could carry a team or a single person who could ruin the game for his team. In 5v5, the weight of an individual player becomes less, for better or for worse. Assassins were also toned down a ton in 3v3 because instagibbing 33% of the opposition was too strong. RIP the good ’ol TB/AS Taka days (when X-Retsu was like 700 base damage). Maybe 5v5 opens up the possibility of assassins to return to their former glory.

When I first saw the 5v5 map revealed, I knew Chainsaw and his team had been hard at work. This was one of the most gorgeous games I had ever seen, and they made it work on mobile devices. Then the shoutcasters mentioned this was only the alpha version and I was even more blown away. From the gorgeous dragons to the elegant turrets, how will they make this any better? I am excited to see what the art team has in store for the final version! Also, as a huge lore fan, very fun to see the lore come to life with the Storm Queen’s two dragons that Lorelai fished up.

Aside from the beautiful new map, I am most excited for the multifaceted strategies that will arise with 3 lanes. I have long been a tanky jungle player, but feel I could maybe fit into an off support / top lane role. I am excited to see the how the extra utility will unfold with the addition of another Fountain of Renewal or Crucible. Will the glass cannon teams be able to overcome a more defensive focused team? With more players on Sovereign’s Rise, so many more possibilities open up to us. Finally, all I really want for Christmas is the return of the Question Mark Ping!

Vainglory is the first MOBA that I have played in any depth. I have had my reservations about 5v5 since it was first announced last year. As games such as Mobile Legends and AoV have come out, I understand the need to have 5v5 to compete with games such as these. Plus, the draw from former PC MOBA players who do not find 3v3 as appealing.

Since I have little knowledge of how 5v5 MOBAs work, it was very hard to follow the strategy behind what was happening in the reveal matches. I do slightly understand which heroes may fit best in roles. I think we should try to develop new strategies from the standard ones that are accepted in other MOBAs, because with touch and some unique Vainglory features, it can blow possibilities wide open. This could be in how many heroes play in lane/jungle/captain rotations, pushing, comps, and macro vs. micro strategy, and how it will change from 3v3 to 5v5. Some of the terminology that was used made sense, such as split pushing, but I have no idea how to actually accomplish that. Additional topics to cover include the individual heroes, how any of their kit may have changed, and how they may be best utilized in game.

Another huge asset that would help players the most would be a detailed map analysis, and high quality graphics to accompany it. In the reveal, a majority of the footage was based around the action and cool plays to show off the game mode, but it was not the most informative session. One of the best ways to do this may be to promote professional players and their content they create on the game mode. Those were some of the most helpful series ever posted on the Vainglory app.

The Vainglory 5v5 unveiling was nothing short of breathtaking, and the high quality excellence that we expected from Super Evil Megacorp. From the gorgeous scenery to the enriched in-depth strategy, the 5v5 mode is shaping up to be one of the largest and most successful community outlets. There was a lot of skepticism about the ability to smoothly play the mode, however, as the larger gamemode would bring about a greater app size, and a far more intensive game that may take a lot more out of a mobile device to run well. Though, as the chief officer said, the new 5v5 game mode brings just around 300 million polygons, 200 different animated actors, and can run at around 120 frames for supported devices! The best part is, it will run just as quickly and just as well if it is able to run 3v3. This amazing feat is easily a big highlight of the 5v5 unveiling. Super Evil Megacorp developers have really outdone their already amazing work with the E.V.I.L. engine, allowing 3v3 to run as smoothly as possible on a wide variety of platforms.

Seeing Vainglory’s 5v5 map for the first time was like falling in love with the game all over again, except this time I knew it was real. The second I saw Blackclaw soar through the middle lane for the first time ever, I knew deep down that “Yep, this game is the one for me.” I plan to go ring (tablet) shopping soon to make things official. I already have CaptainNeato’s blessing!

I think the first thing that came to mind when I saw 5v5 was, “What happens to the heroes?” Does Taka still retain the ability to not instakill the enemy laner, er… ADC? Does Koshka’s stun make that much of a difference in team fights anymore, with so many to back the team up? Surely, all the existing heroes need a little tweaking to adjust to Sovereign’s Rise, but what about new heroes? Are they made with 3v3 in mind and adjusted for 5v5, or the other way around?

Apart from the questions that 5v5 raises, what did the unveiling tell us about future strategies? For example, having a SAW team fight in Blackclaw Rush with the river’s current pushing him along faster would be pretty cool. And taking our mind’s off competitive play for a moment, what does 5v5 introduce for us in solo queue? Gone will be the days when an all Journey Boots Ardan can ruin the entire game. 20% of the team being useless is better than 33.3%. So, too, is the situation when a single member is carrying a team — since the enemy team can focus their energy to shut the carry down as soon as possible. I also think pushing strategies would be pretty interesting with the new dragons. A 1-3-1 lane push with Blackclaw on your side could send the enemy scrambling. Is it more effective than a 0-5-0 push? I’m not sure. We’ll just have to wait and see. It would depend on the enemy’s decision making as well.

How does Vainglory 5v5 stack up against other MOBAs? Vainglory has a significant portion of its community coming from games like League of Legends. The question to many of them, including myself: Does Vainglory do enough to set itself apart from these more popular games? I think one of the most astonishing features of this is Vainglory running on something that you can just slip into your pocket after your game. Really, the only other MOBAs you can compare this with are seen run on $2000-$10000 gaming rigs. The thing with MOBAs, though, is that as a class of game, it is tough to really make significant gameplay-style changes. Elements like a speed boost going in one direction through a river help Vainglory make its case. Other smaller changes like a different map design, a Vain crystal that fights back, and a small but diverse hero pool definitely make it a worthwhile play.

I think everyone would agree that 5v5 is a great idea. We all wanted it, and soon, we’ll have it. How it will be fine tuned, though, is still up in the air.

I remember seeing Sean_M die on stream. That’s all, though.

Be on the lookout for exclusive Vainglory 5V5 content coming to Broken Myth starting this week. On behalf of the whole team, we’re excited to be working with a renewed game and deeper strategy to deliver the resources that you check back for. Stay tuned for more!