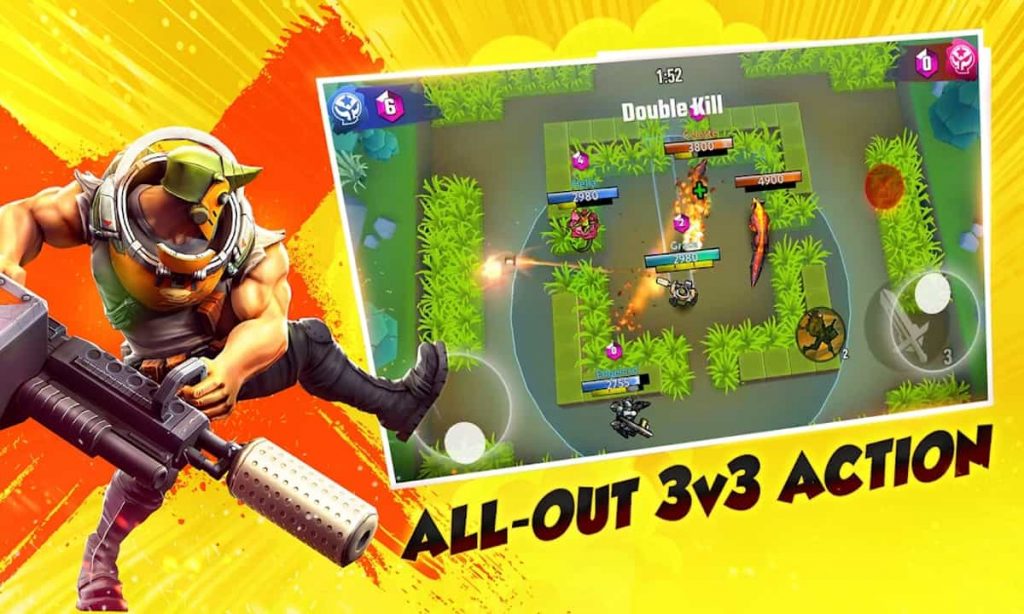 Mobile gaming has become a crowded but undeniably rewarding industry in the past five years. Founders from Super Evil Megacorp have started a new studio called Bazooka Tango to share their creative touch with players. Utilizing the coined E.V.I.L. engine, Bazooka Tango is set to launch Vainglory All Stars, a brawl-type game set in the Vainglory universe. If you aren’t familiar with Vainglory All Stars, check out our recent post breaking down everything you need to know. We chatted with Bazooka Tango founders Stephan Sherman (CaptainNeato) and Bo Daly (Nansen) about hero development, esports potential, when the game will release, and much more. Let’s dive in!

Which hero has been the hardest to adapt into Vainglory All Stars thus far?

Grace! When adapting characters for VGAS, we want to stay true to the vision we have for each character in the Vainglory universe, but at the same time making sure it still makes sense for our gameplay and target audience. We’re careful around allowing stuns in the game (they’re very unfriendly to casual players), and Grace’s abilities from Vainglory required her to have a very intimate range to her opponents which makes her more challenging to use at our new camera angle. We’ll continue to tune her.

Will there be new heroes exclusive to Vainglory All Stars? If so, how does Bazooka Tango intend on ensuring these heroes align with the existing Vainglory universe?

We’re passionate about our heroes, they’re the core to our player’s immersion. Each hero will be carefully considered for their gameplay and heroic appeal before being added to the game.

Honestly, it’s an incredibly difficult thing to balance – we’re striving for new, awesome takes on the heroes, but keeping them grounded in what made them, well, them! That being said we think there’s a lot of room to introduce new sides to a lot of them…

What is the goal for the number of supported heroes at launch?

While we would love to support all the Vainglory characters at launch, being a small team, we need to balance the amount of time we spend on character work versus polishing the core gameplay and other in-game features. For Vainglory we had 12 heroes at launch, and we are aiming to outdo ourselves for VGAS. We’re not quite ready to talk about the total hero slate right now, but we can say we think you guys are going to be pretty happy. We are also looking into adding features that give more depth to each hero, so what you see right now may be different at worldwide launch. Stay tuned!

Are there plans to leverage all of the control schemes developed for Vainglory?

For a MOBA like Vainglory, a tap control makes sense – a tap on the ground means to move there, a tap on an enemy means attack. However, for action brawlers like VGAS, the controls get murky – you would need to have separate controls to define movement and attacks, like using the left and right keys on a mouse.

Before there is a better solution for in-game controls, we have designed VGAS around dual joystick controls, and all of our game design decisions will be around launching abilities through that control scheme first and foremost. Other control schemes are not off the table down the road, but we are focusing on dual joystick controls first. Just like heroes – we want to get the foundation super solid before building more on top of it.

What is the biggest lesson you learned from Vainglory that has been brought into the development of the All Stars version?

As you know, for Vainglory, we never focused on advertising. The game had huge awareness organically, and we relied on that to drive the game. But even with the incredible advantage, we couldn’t scale the game properly and push it to a wider audience. With VGAS, we have a team of experts on the marketing side that will help us drive all this. This time we will make sure we reach not only our existing fans, but also get the word out to the broader market and set this game up for commercial success.

Another lesson we learned from Vainglory is that having an awesome in-game battle experience is great, but not enough. For VGAS, we are spending an incredible amount of time on building out the entire in-game experience, from in-depth character progression system to evolving gaming features to make sure the game is rewarding and engaging to our players in the long run. These things don’t work well when you add them as an afterthought, but need to be built in from Day 1. We are making sure we nail these in the beta phase, taking feedback from our players and creating a game that would be exciting for everyone.

The recent technical beta launch in Brazil has been greeted with open arms. When can we expect other regions to get their hands on an early access?

We have reached more players and are seeing much higher engagement than expected in our Brazil launch, so we want to make sure we are polishing the game and providing better in-game experience before opening up more regions. We carefully choose each country as we go, and depending on the game’s performance we may choose to pivot to different countries at different times. The next country in our gunsights is still a secret, but will likely get their hands on VGAS as early as the next few weeks.

Do you have a specific aspect of the game that you are excited to formally unveil?

Oh man, this one always gets me in trouble. Short answer? Yes. Longer answer? Hell yes. But I can’t say more, the guys will kill me, I’m terrible at this, next question.

In a recent press release, it was stated that Vainglory All Stars does not have immediate plans to become an esport. Where does Bazooka Tango see this game years down the line?

We still firmly believe that game studios can not declare their game an esport– your community tells you if it is or if it isn’t. If our community shows us through their energy and enthusiasm that VGAS hits that water mark, we would love to support that and do all we can to support the community in enjoying the game as part of the competitive scene. But we have to get their blessing first.

Can you share more about the talented team who is working (from home!) to make this game? What do they bring to the table that sets them apart from the rest of the industry?

At Bazooka Tango, we are lucky enough to have built a super diverse team consisting of members from the core team of SEMC, as well as recruited gaming veterans from across the industry. For example, on the art side, we have Jason Osipa, who was part of the founding team at SEMC and led the initial art and sound creation for Vainglory. On the publishing side, we have David Shinn, who has 10+ years of experience in gaming and has led the marketing/publishing function in multiple top-tier publishers, the latest one being Riot Games.

As you may have heard, the gaming industry has notoriously large turnover, with many leaving the industry after just a few years. The average years of experience at Bazooka Tango is 10. We have people on the team who have seen the launches of 60, 70, 80 games. From top-grossing games to massive failures, a huge advantage for us is the collective lessons our team has learned. Knowing what works is one thing, but being around to see what doesn’t over the years gives you the guardrails you need to know where to focus. It’s a big piece of the DNA in the company we’ve set out to build.

At the core, as long as we stay player-first, build world-class games that are fun and engaging, and bring onboard the right people to scale and monetize that, we’re doing great.

When can we play Corpus?

We are all Corpus, in our hearts.

With an experienced team and tons of resources, we can expect Bazooka Tango to develop games that will take mobile gaming to the next level — just like Vainglory. Special thanks to CaptainNeato and Nansen for providing insight on what’s to come. We look forward to continue covering the game in the near future. To stay updated on all information, follow Vainglory All Stars on Twitter!

What, Who, When is Vainglory All Stars?