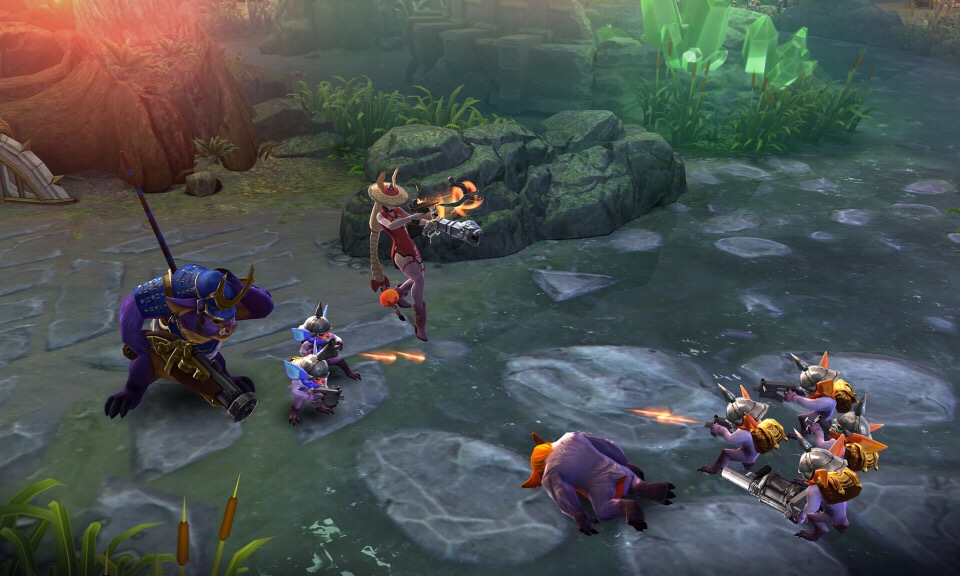 Update 3.1 introduced gameplay, hero, and item balance changes to work toward a more enjoyable 5V5 experience. Two developers from SEMC’s balancing team, Nivmett and Zekent, discussed how these changes correlate to an equal playing field. SurpriseBirthday was also brought on to address frustration surrounding 5V5 Ranked this past week. For those that couldn’t watch the stream live, we have you covered with the full details!

Earlier this week, PlayoffBeard announced on Twitter that he’s soon leaving SEMC to seek new opportunities. He’s been with Vainglory since the start and has even hired some of the other community-front developers like SugarVenom. The stream opened with a huge thank you to him on behalf of the entire company.

The majority of the stream was spent discussing balance changes implemented in Vainglory’s most recent update. Zekent and Nivmett divulged into how each change shapes the new meta.

In 3.0, teams would capture Blackclaw and immediately have to port home to top off their health. Now, with a regenerative effect upon capturing, teams will be ready to turret run or split push after capturing Blackclaw.

A precedent was set for laners to steal some or all of the jungle creatures. With lane minions arriving sooner, laners have to tend to the lane earlier on. This allows junglers to take back control of their primary gold source.

By lowering the yielded gold of lane minions, the desire to rotate to assist teammates is increased. Team fights are now more common and inclusive. As such, the frequency of split pushing to hyper carry is also reduced.

Toward the end of the game when the Vain crystal was vulnerable, teams would effortlessly use Teleport Boots to jump in the enemy base and shatter the vain. Vain crystals now regenerate health at an increased rate, which discourages the persistent back door strategy.

Alpha was intended to stick to the carry, but her survivability was too strong. She now reboots not as healthy as before alongside slightly lower damage and base health to make her more susceptible to focused targeting.

Ardan’s captain damage was not as impactful as it should have been. A complete buff would have turned his WP/CP path too strong, especially in regions where it already populated (SEA/EA). To accommodate for this, the base damage on Blood for Blood was increased while also decreasing the crystal ratio.

Catherine’s bubble was “frustrating” to deal with in 3.0. Stacking cooldown items was too effective, so the base cooldown was increased. She also didn’t pack that much of a punch, seeing damage buffs to her A and C abilities.

Landing Celeste’s ultimate in 5V5 was difficult because of the increased map space. With a faster travel speed, players can snipe away on the Rise. Watch out for surprise stars in 3V3, too.

Churnwalker wasn’t durable enough to survive a 5V5 fight. Healing buffs allow him to withstand the laning phase specifically, and a cooldown decrease on his ultimate makes his utility more daunting. Chain ‘em up!

Fortress was arguably the best hero during Update 3.0. His early game will still hit hard, but his scaling was decreased with slight damage nerfs and lower wolf health.

Grace’s enemies were prone to being bursted down by her weapon path. Her weapon ratios were reduced, but otherwise, her captain path received direct buffs with base damage increases.

Gwen fell off later on, while her early game was menacing. Her early game damage was reduced, but she regains almost all of this power in the late game. Scaling is key to balance a hero’s power spike!

Kestrel received “awesome buffs” to make her a “force to be reckoned with.” Increasing her Adrenaline stack duration is a direct buff to her role in the lane. Her ultimate ability’s cooldown was deceased to allow for more cross-map highlight reel snipes.

Koshka was another strong hero in 3.0. Her early game damage was decreased to make her less dominant in the first few minutes, but this decrease isn’t felt much later on. Increasing jungle creature experience generation was also an indirect buff to her early game power spike, which was factored into her nerfs.

Krul was too consistent with popping out of bushes and sticking onto an enemy carry. His perk empowerment duration was brought down to require planning before exposure.

Missing Lance’s Impale in 5V5 left him vulnerable for too long of a duration. To not reduce his skill cap, landing an Impale is now more rewarding with increased damage and lower cooldown.

Lyra was tricky to balance for 5V5 without tipping the scale in 3V3. Specific aspects of her kit had to be modified, and during this process, several iterations were tested. She’s been tanked up a bit alongside increased healing scaling and damage output.

Phinn was too slow on Sovereign’s Rise. He can now move faster between lanes, and his B has increased damage. When tanking in the middle of multiple enemies, this adds up.

Samuel was incredibly strong in the top and mid lane. While he still will boast this strength, his crystal damage and healing were reduced; thus, his sustain mechanic took an overall hit.

Vox was nerfed … and buffed. His crystal basic attack damage was decreased, but his crystal resonance damage was increased due to a major bug fix. If you were hoping to see less of his new album, the top charts haven’t refreshed.

Reducing Tension Bow’s damage output shaves off some of the early game strength of heroes that utilize this item, namely Gwen.

The first few days of 5V5 Ranked saw a number of issues revolving around incorrect progression, which SEMC addressed on Reddit. Nivmett gave up his seat on stream to put SurpriseBirthday—SEMC’s Chief Product Officer—in the limelight to discuss the state of 5V5 Ranking. If you’re interested in listening to the whole discussion, check out the video we clipped above.

4-player parties are enabled in Casual, but not in Ranked. Parties of this number can dictate the surrender vote to ultimately result in an unforgiving experience for the solo player’s progression.

In order to Rank with a party, everyone within the party must be ≤1 Skill Tier apart from each other. Players were seeded into 5V5 tiers they did not expect, which left some teammates out of parties. This rule was increased to ≤2 until SEMC decides that enough players reach a tier that reflects their skill.

As a reminder, when partying with players who have a higher MMR than you (hidden number), the matchmaker takes a value close to the highest player’s MMR to find a balanced match.

For your first 30 5V5 Ranked games, you receive increased gains. After that initial placement period, players should expect to receive these Skill Tier values on average:

Let us know your favorite balance change this update below! 3.1.0 had a few crashes, which transcribed to cases of AFK teammates. If you experienced these crashes, update your game to 3.1.1 in the App Store or Google Play Store.