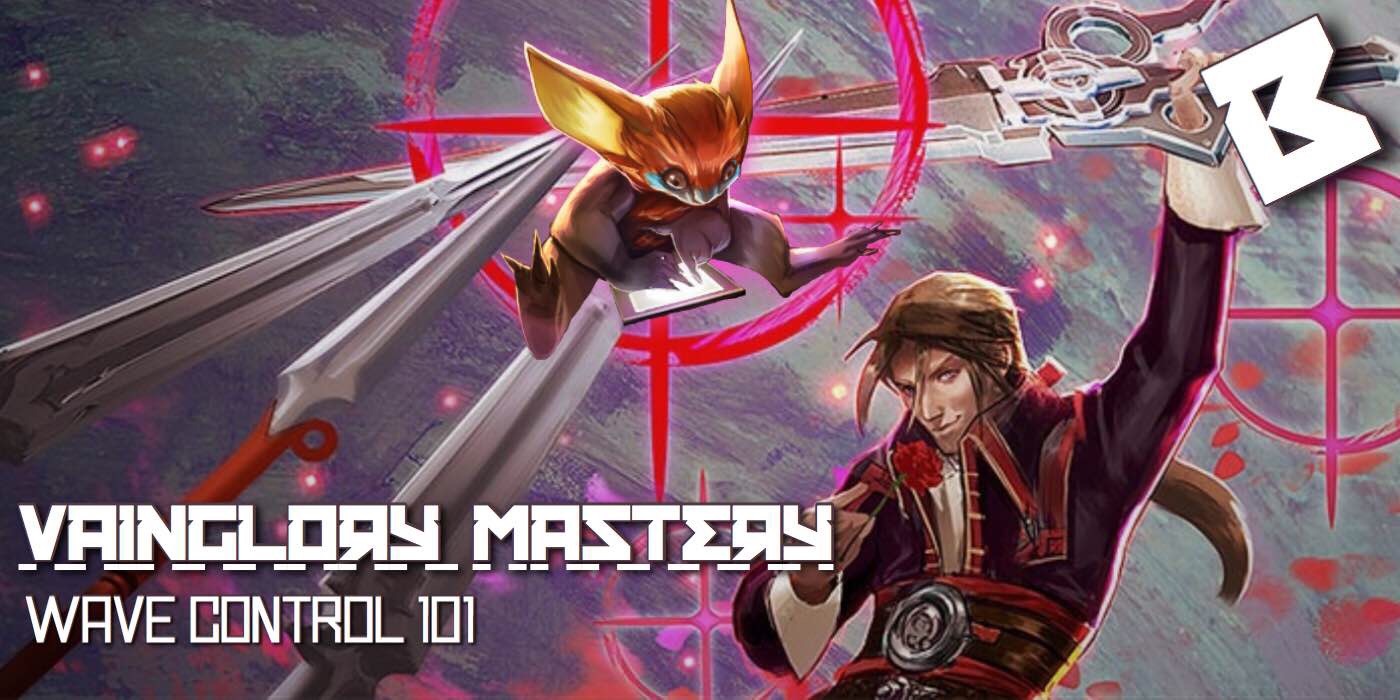 In Vainglory and other MOBA-titles, wave control and management is an important focus in high levels of play. The strategic implication and elements to these skills are endless.

What is Wave Control?

Simply put, wave control is the manipulation of allied and enemy lane minions to deny or gain advantages in the game. The technique varies, and each maneuver has its own pros and cons associated with it. The goal, however, is always to deny minions, manipulate map control, and increase your team’s strategic depths. Wave control yields six different methods to achieve these goals.

To execute a freeze, first make sure that both waves clash equally and target the first minion of the wave. Once you’ve reached an equal state on both sides, remain relatively still next to the two waves and allow the minions to battle it out. Never attack the wave—only watch and wait. A well-executed freeze will keep the wave dead and never out of position on the map. Why would you want to do this, you ask? A freeze is best used to set up a gank on the enemy laner. Depending on your map control, holding the wave means that the enemy laner isn’t allowed a free pass to farm. Thus, they remain in constant danger and pressure of a gank whenever they attempt to farm the wave. Stay in a bush, and an opportunity will more often than not present itself. If you do this in times when you generally aren’t farming, you begin to gain small leads by focusing other points on the map while the enemy laner creeps up in fear of their surroundings. A freeze adds a lot of pressure on the map. It becomes an objective for the enemy team to cancel out as well as keeps the map flow intact. Freezes usually force the enemy team to cease any plans in the jungle and move up to lane to deal with it. In turn, it acts as a ticking time bomb if not dealt with. You can push out the wave at any time and deny a ton of farm while securing turret damage for your team.

Stalling is similar to the freeze mechanic, except this time you last-hit the minions. In stalling, remain relatively still next to the two waves and auto attack nearly dead minions. You gain gold while your wave barely moves. It denies a decent amount of minions to the enemy laner if you stall in a position closer to your turret. However, keep in mind it is fairly easy to break a stall. To do this, a hero is only required to use a ranged ability and shove the enemy wave into the nearest turret. With this in mind, it’s better to perform a stall while your teammates pressure a second or third point in the map. This forces the enemy team to decide on saving their lane farm or dealing with the pressure on the opposite side of the map. This mechanic is the most commonly used, and one of the most valued.

A very useful yet underused mechanic in Vainglory is controlling the aggro of the wave; specifically in 1v1 or 2v2 situations during the lane phase. You can do this by auto-attacking an enemy hero. When performed, the enemy minions will aggro onto you and move up. This will eventually drag the wave closer to you. With the wave on your side, you will have the advantage in trading and thus secure a safer position to avoid lane ganks from the enemy side. You can also use dragging to further push the enemy wave into a turret, or change a wave’s orientation. This maneuver is also used to perform a slow push.

A proxy is executed when you burst an enemy wave away to allow your wave to pass. In practical use, it is a good way to keep your minions alive and healthy as well as to deter them from swapping aggro from turrets. Proxy farming was first introduced as a method to combat the ever-growing pain of the SAW push comp. You would run the enemy side of the map and kill the minion waves before they could reach the enemy sieging your turrets. The skill has now been turned to work in the opposite effect. Instead of using it to halt a siege, proxy farming is now commonly used by many pro teams to reinforce their siege strengths.

The slow push is often considered to be the most strategically adept mechanic in wave control. There are two forms of this. The first is when you slow push an allied minion wave. To do this, you kill the back two minions of an enemy wave. Your wave will slowly begin to push. You do this specifically when you are preparing to siege an enemy turret. When you slow push, you are able to double up a wave. By the time the wave is finished killing off minions, you will have a second wave already crashing into your initial wave, usually strengthening the wave by 2–3 minions. The second form is when you have the enemy wave slow push. This is the best and most effective way to deny the enemy any lane minions. It is also one of the harder mechanics to use. You can execute this by shoving your wave into the enemy turret and allowing it to bounce back with a doubled-up wave. Another method is to use aggro control by dragging an enemy wave in a circle and putting the beefiest minion up front. This will ensure that your wave targets that minion first. Eventually, the wave will balance itself out, but not without a minion or two left standing to begin the slow push. Apart from bursting down the wave and then pushing turrets, there isn’t much to go into for the hard push. As simple as it is, it does hold a lot of advantages. Pushing a lane can allow your team to freely harass the enemy laner and effectively prevent him from farming because of it. However, you will need to be careful—without proper map control, vision, and pressure in the lane, an enemy laner can utilize a hard push to his advantage and stall or begin his own push.

Surpass your boundaries of standard play and take a dip into the highest levels of Vainglory. Wave control is your first step to becoming a breakout talent. It separates solo queue talent from someone with the pedigree of BestChuckNa. Add more strategy to your games and success will follow. Enjoy your time utilizing this new set of skills to your advantage on the Fold!

Vainglory expert and personality. Tell what you think.

Latest posts by GrassKun (see all)