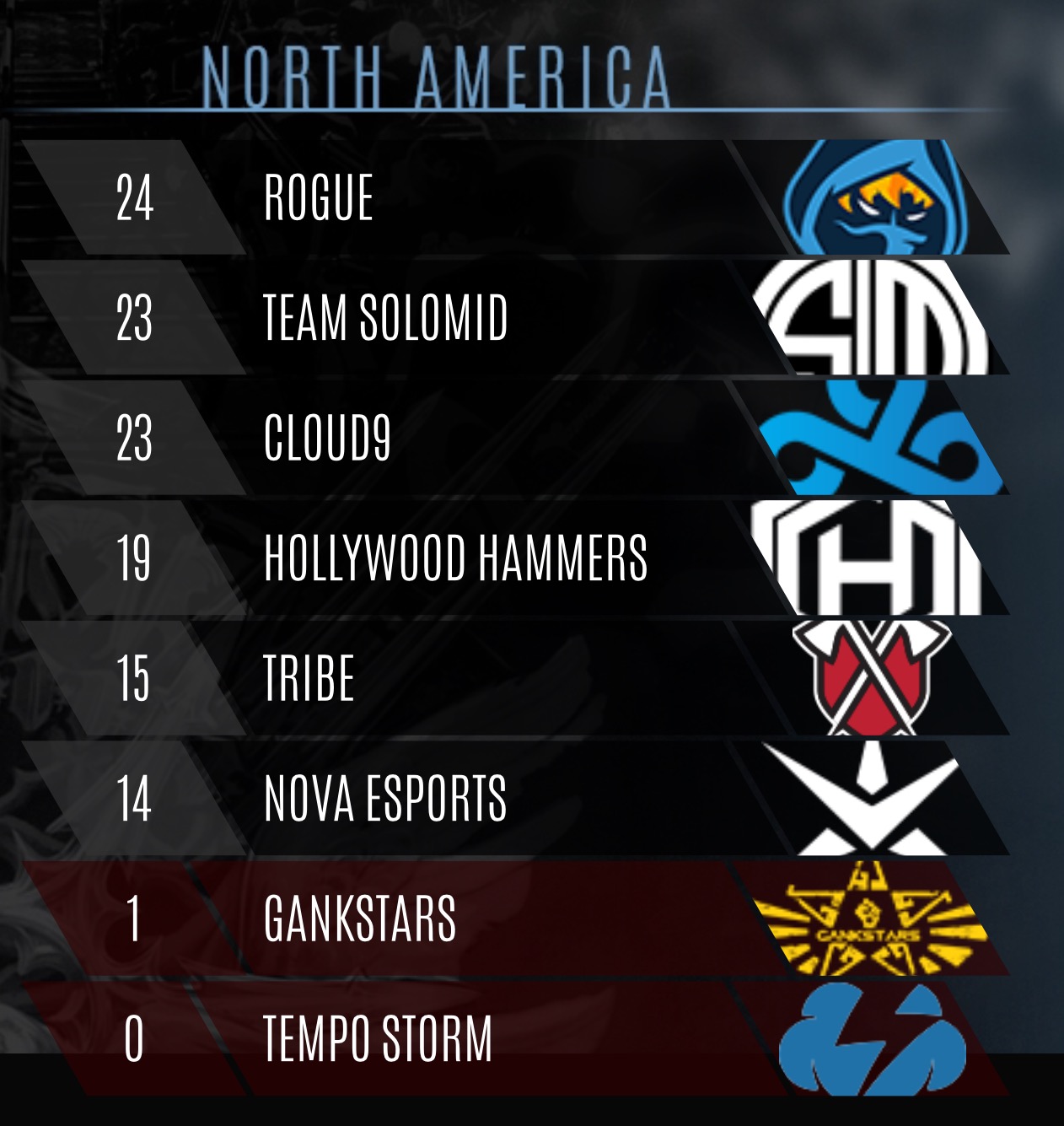 As we head into the second week of split two, the action heated up! This week GankStars was able to place on the board by taking a game off of Rogue. TSM also had to play their substitute, LuckyBread, with VONC being unable to play. Additionally, this week once again held major consequences as teams fought to claim the last available NA spot for the upcoming Vainglory World Championship.

The day kicked off with Tribe Gaming taking on Tempo Storm. Tribe handled them fairly easily, taking the series 2-0. In the second series of the day, NOVA was able to take the first game. Cloud9 won the next two games in commanding fashion to take the series 2-1. The last game of the series for Cloud9 was a perfect game with 21 kills to NOVA’s 0. In the offline series of the day, GankStars took on Rogue. Although Rogue was able to claim the series 2-1, GankStars was able to make their way into the point standings for the Autumn Season with a victory in the second game. In the last series of the day, the Vainglory community was granted a rare sight — TSM’s Captain FlashX moving into the jungle role, with their starter VONC not being able to play. TSM eventually fell 2-1 to Hammers. Their one win kept them close to the top of the point standings for the season, though.

The second day of action saw every series excluding the third place match-up go to three games. In the first semifinal of the day, Cloud9 took the first game, with Hollywood Hammers taking the last two games to win the series. The other semifinal provided Rogue with the opportunity to move to the finals, which would give them a chance to claim the season point lead. Rogue was able to move on winning the series 2-1. In the third place match, Tribe defeated Cloud9 2-0. This week’s finals pitted Rouge vs. Hollywood Hammers. Rogue was able to claim victory in the first game, but then dropped the next two, allowing Hammers to win the second week of split two. Even though Rogue lost the series, their one victory granted them to pull ahead of Cloud9 and TSM by one point in the overall season standings.

Series of the Week: Rogue Vs. Hollywood Hammers

This week with so many different series going to three games, it was not easy to pick the series for this portion of the recap. This series had major implications for Rogue specifically, pulling ahead of Cloud9 and TSM. In the first game of the series, Rogue defeated Hammers in a very short 12-minute match. They were able to accomplish this by using a deadly combo of SAW and Churnwalker. In a much more even game two that lasted almost twice as long as the first match, Hammers outdrafted Rogue while on their way to tying up the series. In the third game Rogue picked up the SAW and Churnwalker combination again. This time, however, they did not see the game level of success with Rogue pulling ahead early. By mid-game Hammers had evened the contest, and slowly drifted ahead the rest of the match to claim their first overall weekly victory of the season!

This week the meta dictated Reim and Blackfeather with great success, finishing the week with win percentages of 71% and 58%, respectively. Ardan and Fortress also went over well. Fortress scored a perfect 5-for-5 win rate while being played by only two teams — Cloud9 (3) and Hollywood Hammers (2). Alpha rounded out the list of top heroes, going 6-for-8 while only being banned 3 times. Two heroes that did not see as much success were Kestrel, only winning 2 matches, and Catherine — who ended 1-for-4. This is one of the first times Catherine has not seen a high pick/ban rate for several splits. For the whole season, both Krul and Reim are slowly closing in on Catherine, each being banned only 4 times less. Catch the week three action as the race tightens between TSM, Cloud9, and Rogue to win the Autumn Season and claim a spot at the upcoming Worlds Championship. TSM will be back to full strength with VONC returning to the roster, while Rogue will be coming off of a disappointing finish in week two. Be sure to catch the action on Vainglory’s Stream this weekend! Week 3 for Split 2 in NA kicks off with Cloud9 taking on Team SoloMid at 2PM PDT (5PM EDT). We’ll be covering the event here on Broken Myth so you don’t miss a blink of Vainglory Esports action!