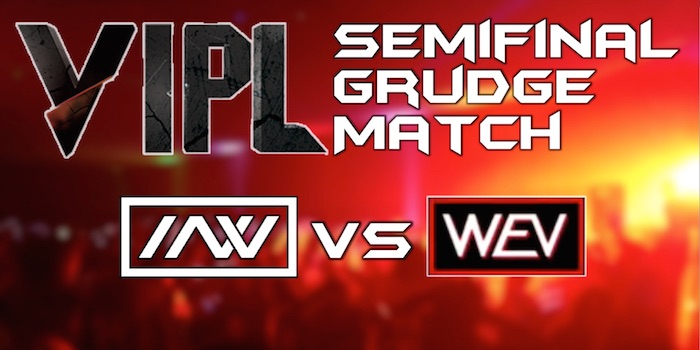 The dark horse, WEV, closed out the wild card round with two decisive victories and immediately found themselves with just a couple of days to prepare for a match against the undefeated Invincible Armada. When theses two teams faced off in the group stage, it was a close match that spanned 30 minutes, with Invincible Armada barely scraping together a win in the end. This best-of-three grudge match will be the perfect means of determining who is truly the king of Group C and worthy of going into the VIPL finals. Here’s the details you should know before Saturday’s games.

Even though Invincible Armada was already a fan favorite from last season, they have since picked up a new laner, druid, who has been a force to be reckoned with this season. In the previous match against WEV, he had accrued 320 creep score (CS) – a.k.a. minion kills – by the 27-minute mark, which is unprecedented in VIPL. Top laners can average around 10 CS per minute and he exceeded that by a fair margin.

Also, druid‘s Vox gameplay is some of the best I’ve seen. Out of three games, he’s played Vox twice and Celeste once (when Vox was banned). Maybe I’m reading too much into this, but I think druid likes Vox. And while I’d love to watch him play some more Vox games, I don’t think that will be in WEV’s best interest.

WEV has proven to be extremely resilient during hero drafts and innovative in countering their opponents.

After seeing Ringo banned against Liege (laner) three times, it’s become quite obvious what WEV’s opponents fear most. Nonetheless, when Liege‘s top hero gets banned, he has proven you can’t stop him – he just picks another hero. In fact, the whole team has proven to be fairly versatile. Here’s the season draft history to date:

Yes, you’re seeing that correctly: roam Taka (with Ironguard Contract) was leveraged in competitive gameplay – and very successfully I might add. Puhet paired up with Mango‘s Koshka to form a double assassin gank squad and they were simply able to burst down targets. In summary, WEV’s versatility has opened doorways to innovation, which can catch opponents off guard. I’m a big fan of innovation and I look forward to seeing what else WEV has in their bag of tricks.

Keep in mind, these VIPL matches are still running patch 1.11. Unlike the 1.12 meta, 1.11 is more snowball-y, where early-game aggression can more easily starve out an opponent and prevent them from recovering. Tying into this meta, both teams’ junglers have an affinity for Koshka, who is probably one of the best early-game aggressors. WEV’s jungler, Mango, has drafted her three times this season, including both games in the wild card round. The last time Invincible Armada’s jungler, Wine, was able to draft Koshka, they were able to set a new VIPL record for fastest win (13 minutes 31 seconds), beating GankStars’ previous record (13 minutes 42 seconds).

These are the last two Korean teams remaining in the tournament and one of them will go on to face the top North American team (TBD next Thursday). During this season, both teams have proven themselves capable of representing Korea in the finals. While Invincible Armada [3-0] has an impressive, undefeated record this season, WEV is now 5-1 after going undefeated in the wild card round.

druid is certainly amazing, but he may also be the Achilles’ heel of Invincible Armada, especially when they give him the majority of the minion kills. If more than half the team gold is placed into one player and that player dies in combat, the battefield will experience a sudden, large power shift. Invincible Armada will need to prove that they’re ambidextrous with their carries; not just to win against WEV, but if they are to play against a team like GankStars in the finals.  As to whether or not WEV lets druid have Vox, they have multiple options to work with, all of which can work: ban it, pick it, or counter it.

Beyond Vox, there are several other key bans/picks on the table: Koshka (mentioned earlier), Ardan (top roam), Ringo (Liege’s comfort pick), Skye, and Celeste. Both teams favor double CP comps, the exception being when Ringo isn’t banned against Liege. Both teams have exhibited good counterbuilding skills, so going double CP seems like a sub-optimal strategy. I’d like to see these teams diversify their damage output with both WP and CP carries, forcing their opponents to chose whether to build armor or shield (or both).

Due to Invincible Armada’s inclination to play a farm-heavy, late-game strategy, I’d love to see if WEV can counter that strategy with a strong, early-game comp, such as a Koshka/Fortress jungle. If this runs to a three-game series, as I expect, they would be able to complete that early-game comp with a Ringo lane, which is outside of the typical Korean meta, but a popular North American power combo.

In the end, I’d like to think that WEV has done their homework and have figured out how they’re going to take down Invincible Armada. They have the potential. On the flip side, I know that Invincible Armada hasn’t been relaxing for two weeks. They’ve been tightening up their gameplay, developing new strategies, and filling their bag of tricks.

This is going to be another super close one, but I’m placing my vote on the dark horse, WEV, with a second win in the third game. May the best team win – they both deserve it. Go Korea!

UPDATE: I’m hearing rumors that the semifinals and finals might be on patch 1.12. If that is the case, expect the meta to be less focused on the early-game snowball, which plays nicely into Invincible Armada’s modus operandi. Matches in 1.12 tend to last longer on average and early aggressors like Fortress and Koshka are less likely to make an appearance. Also, I’d expect to see a lot more Skye and possibly some Blackfeather and Kestrel. For complete details on things to expect in a 1.12 matchup, I recommend the 1.12 tier list. Overall, a switch to 1.12 would produce some fun, new things coming from both teams.

Don’t miss these significant matches! They will be streamed on the OGN Global Twitch channel on January 2 at 8pm PST  (January 3 at 5am CET; 1pm KST). If you’re not able to watch the matches live, you can always watch them on OGN’s past broadcasts page. Enjoy!

While you’re waiting, if you want to re-watch the previous match between WEV and Invincible Armada, you can find it here (timestamp = 1:35:00).