Week three saw Malene descend onto the Rise with the implementation of Update 3.2 in VPL. New balance changes brought the ability to snowball even harder, resulting in several extremely short matches. Additional surprises and upsets this week kept the action tense!

TSM started the day off fast with a quick win against Vision. TSM consistently shows why they are the team to beat in North America. Look for their match ups against the higher ranked teams in the coming weeks. For the first time this preseason, daniel extended outside of his Blackfeather comfort zone by drafting Rona — and still performing exceptionally well in their victory.

Coming into their matchup against Salamanders, Nova was considered the underdog; however, they were able to pull off a convincing win. Malene was played for the first time by StartingAllOver. Coupled with the pick of Samuel, Nova was able to take the win from Salamanders’  much more experienced roster.

After taking two disappointing losses in week two, Rogue picked up a win against another struggling Hammers team. Hammers also played three substitutes (papaJ0N, benZo, and BlueStacks) that were not on their original roster announcement at the beginning of the preseason. This is a team that has a lot to work on if they want to be in the hunt for a trip to Worlds this year.

In other tournaments leading up to the VPL preseason, Tilt Rehab (formerly Misfits) was able to compete with the likes of TSM and Tribe. Even though Tribe still took the win, it was the longest contest of the preseason for Tribe.

Another team that brought in a substitute for the weekend was Salamanders with TinkeR. Salamanders again decided against using their first ban on Malene. TSM jumped to a small early lead, even with Salamanders taking the first Ghostwing just after the 8-minute mark. From here, the rest of the game fell into TSM’s hands, giving them the victory at 16 minutes.

Following the weekend trend, Rogue also brought in a substitute, martohhh. This match, Vision played much better on their way to their second win of the preseason. Both of these teams are in the middle of the pack looking to work their way to the top of the standings.

This week provided a small shake-up to the meta with Update 3.2 taking place on VPL now. Some of the meta remained the same.

It will be interesting to see how the 3.2 meta develops over the next several weeks of competitive play.

In this week’s additional statistics section, we’re going to take a look at two of the current top mages. Celeste and Samuel have consistently been the top two mages on the Rise since the beginning of the preseason. We’ll also take a look and see how they compare to each other. This data is provided by VGPRO and includes stats from both NA and EU. 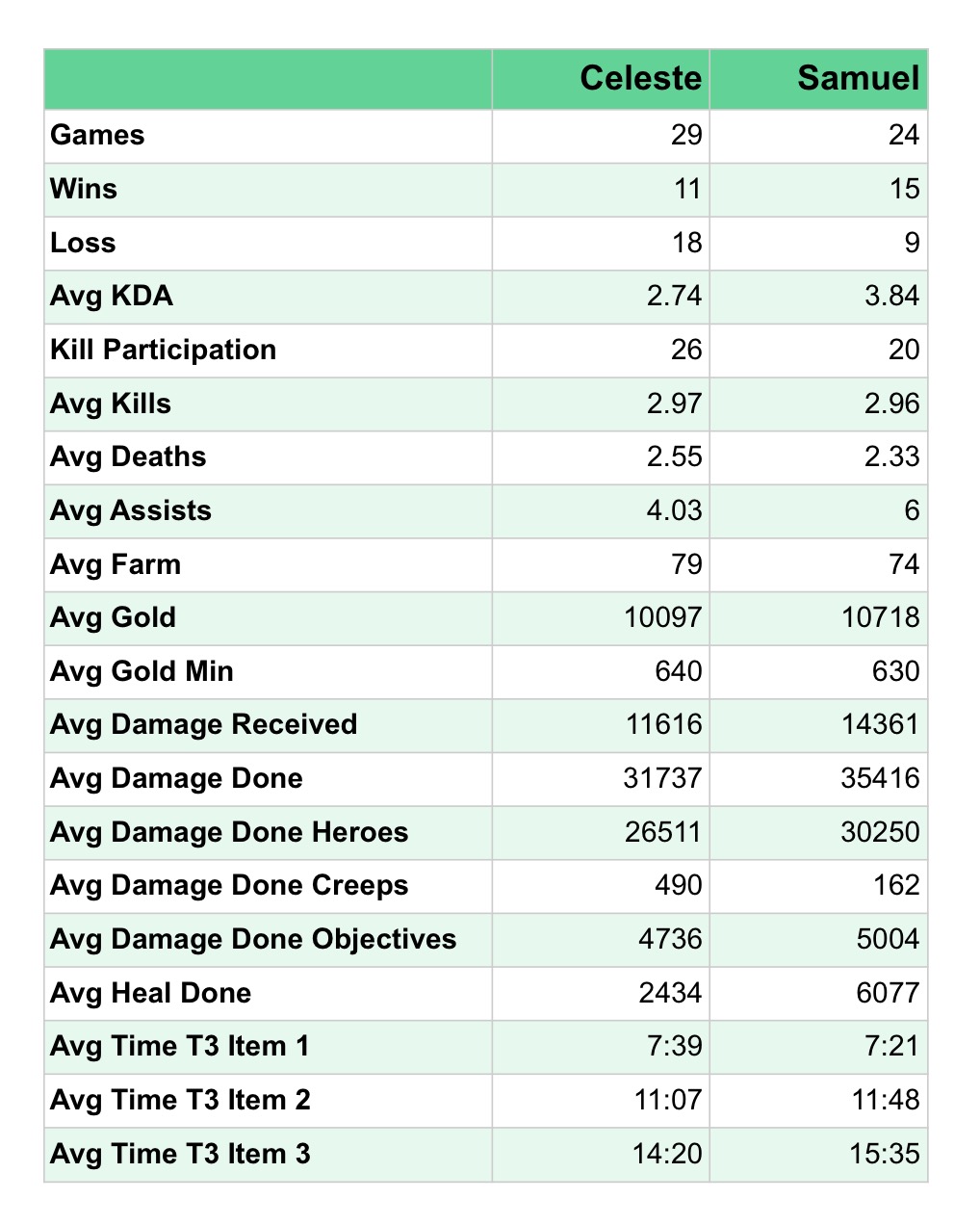 Looking at the comparison, a major point that jumps out is that Samuel, although being picked 5 times less, has 4 more wins than Celeste. One of the reasons for this could be that while both heroes have a high damage output potential, Samuel boasts better mobility. This allows him to move around the Rise better as well as maneuver through team fights.

The other standout statistic is the Average Heal Done, with Samuel providing natural sustain, both health and energy, via his heroic perk. This gives Samuel the ability to soak up more damage, especially with the addition of two more heroes into every match.

In North America, Samuel was also banned less than Celeste, 3 to 7 bans respectively. Keep an eye out for Samuel receiving more action, even with the changes to the 3.2 meta.

Week three saw the action intensify as the halfway mark of the preseason was passed. Look forward to tense match ups in week four with teams beginning to settle down and become more comfortable with 5V5.

Week four action for NA begins at 12PM PDT. Catch the stream live on Vainglory’s official Twitch channel! If you were unable to watch any of the matches from this past weekend, view the VODs. To see how the VPL teams stack up against each other, check out our most recent team power rankings.