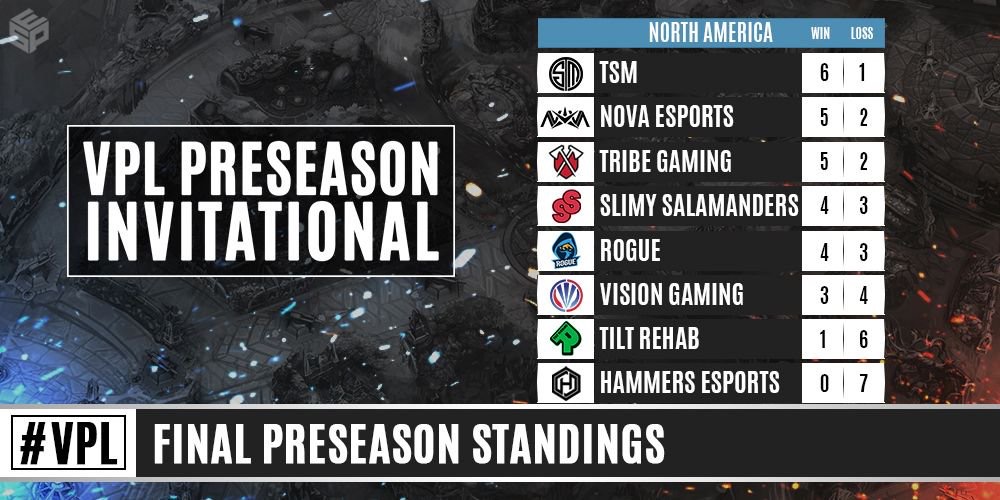 The final week of VPL preseason started with the anticipated TSM vs. Tribe match. Nova also proved their worth, resting at second place overall. Through the weekend, there were several sneak peeks into the Summer season of VPL to begin preparing viewers for what’s to come.

In the first game of the weekend, Rogue and Tilt Rehab faced off. Rogue jumped to a slight early lead, and with their Samuel and Celeste composition ramping up, they took this lead into the mid game. Following a small comeback, Tilt Rehab captured Blackclaw then stole another later into the match. Tilt Rehab lost a crucial team fight, which allowed Rogue to take the victory.

The second game of the day was the highly anticipated TSM vs. Tribe match up. TSM entered the game with an interesting draft, opting to select four traditional “captains.” The game started off relatively slow, with a total of two kills by the 10-minute mark. Immediately afterward, there was a drawn-out fight upon both teams losing several members. The match continued to pace slow and methodical on each team’s side with intermittent brawling fights. No dragon was taken until the 20:30 mark, when TSM captured Ghostwing. On the back of this, TSM cleared the path to the Vain crystal in the bottom lane, taking control of the Rise and winning the match!

Hammers continued their season-long struggle in their match up against Slimy Salamanders. In the draft, Hammers let Malene through, which hadn’t been done since week three, when Salamanders let her through twice. This decision proved costly, as Salamanders jumped to an early lead. From here, they continued to roll, taking both dragons and making a final push to win the game at 14 minutes.

The very last matchup of the VPL preseason saw Vision take on the surging Nova squad. Vision claimed first blood, while Nova maintained a small gold lead. Nova’s composition started to ramp up, providing them with the ability to take Ghostwing at 9 minutes. Nova continued to perform well through the second half of the preseason. Their young roster seemed to mature and gain synergy over the five weeks on their way to being one of the top teams in NA.

There were not many major changes from what viewers have seen over the last several weeks since Update 3.2 went live on the VPL. There were two major data points of note:

As a disclaimer, the stats gathered below span the entire preseason. There was a total of 28 games played in the preseason, across both Update 3.1 and 3.2, which include the addition of Malene — who was only available from week three onward (16 total games). 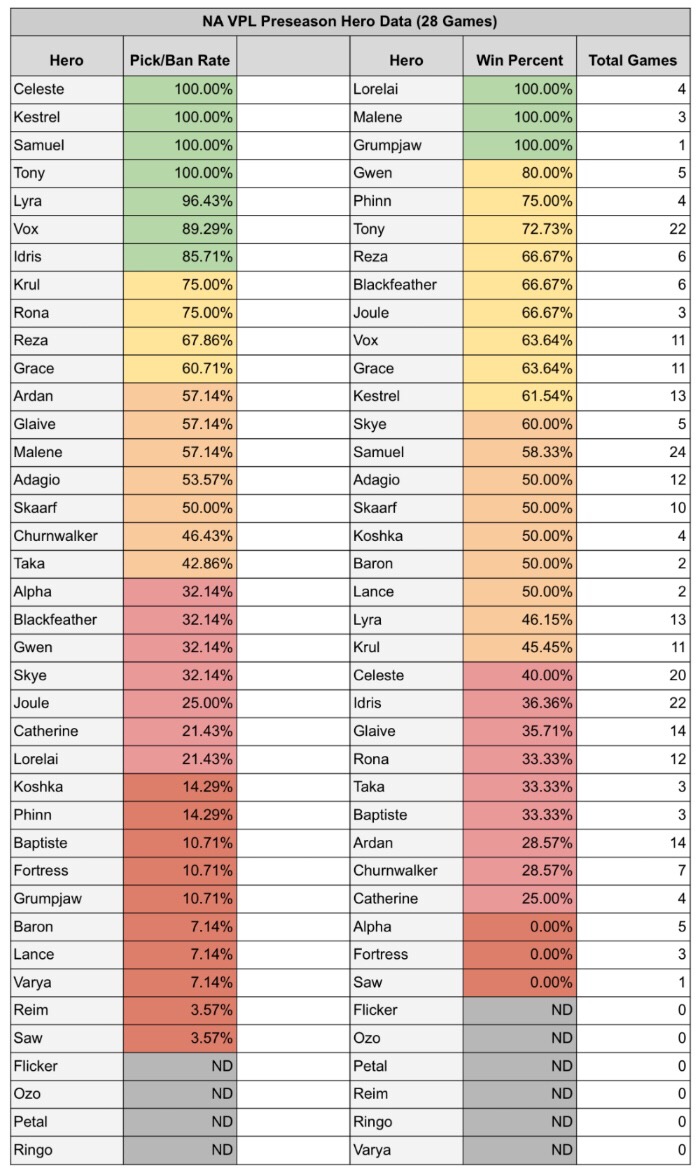 If a tie existed in win percent, the following statistics were used to determine precise rankings (in order): number of games played, number of bans used, alphabetical order.

This weekend, viewers were given insight into how the Summer season of VPL will operate. There were several key points that showed change from the format we have become accustomed to:

This provides an interesting twist, allowing for teams to show potential from the open sign-up to prove themselves. It is unknown how long this format will be used for. The downside to this could be a large number of blowout wins by the invitational teams, as the skill gap between the two groups will be immense in most cases. Keep an eye out for more information over the coming weeks!

While the preseason was only a short five week competition, it provided a welcome return to competitive Vainglory action. There were some early hiccups along the way, but the production team was able to provide excellent quality over time. Stay tuned for more news about the upcoming Summer season!

If you were unable to catch the week five action of the preseason, check out the VODs on the official Vainglory Twitch channel. This week’s power rankings will be published soon — we’ll update this text once it’s available.