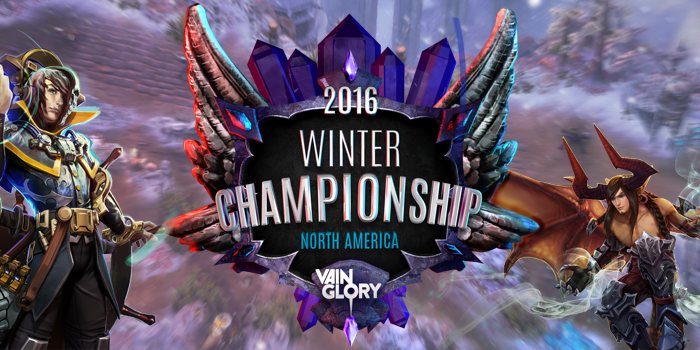 The Winter Season is coming to an end and in North America the 2016 Winter Championship has concluded. The season championship is always a great source of knowledge for the community. One of the best things that we can gain from them is seeing how heroes perform when played in that level of competition. We’ve compiled the statistics of all of the draft picks from the Vainglory Winter 2016 North American Championship and present the pick information in an easy-to-access form. AdagioArdanBlackfeatherCatherineCelesteFortressGlaiveJouleKestrelKoshkaKrulOzoPetalPhinnReimRingoRonaSAWSkaarfSkyeTakaVox
Adagio was the king of the championship. He came away with Ban Win rate of 82% and was played or banned in every single match. It’s no wonder that he ended up at the top of our most recent tier list.
Ardan kept a positive Ban Win rate (58%) and was involved in 79% of matches (as a ban or pick). Him and other supports this patch have demonstrated the dominance of the dominance of the roam position this patch.
Blackfeather got a healthy amount of play, but more often than not, he found himself on the losing side of matches.
Catherine found herself in a very similar position to Ardan in this tournament. The two both did very well for themselves at this event as well as in this patch in general.
No data for this event.

The Starqueen has fallen this patch and it was clearly reflected in the Championships. She saw no play from any of the teams.

Fortress found decent success in the Championship and followed the general trend of extremely dominant roams.
Glaive wasn’t absent from the Championships, but he was far from the star of it either.
No data for this event.

Joule has been having a tough time in recent patches and was absent from the Championships.

No data for this tournament.

Kestrel dominated the meta at her release, but due to some recent nerf she wasn’t viable enough to see play at the event.

Koshka tried her best, but with the recent changes to her Twirly Death stacks, she went 0 for 4 at the Championships.
This undead viking got a rework this patch and found himself getting played and even banned twice.
Ozo wasn’t seen much in the Championships, but when he was he went 2 for 2. A pretty solid record from a less popular pick.
Petal is finally back into the meta thanks to recent buffs to her minions, as a result she got a pretty solid amount of play in the Championships and managed to just about break even on losses and wins.
Phinn was nearly absent from the Championship and the one time he was there, he may as well have been absent. Phone’s lack of mobility is too big of a vulnerability in NA’s competitive meta.
The grumpy old ice mage managed pretty well for himself walking away from the Championship with a positive win-loss rate (63%).
Ringo is dominating the NA competitive meta and he definitely represented at the Championship. 82% Ban Win rate for the 1-armed trick shooter.
No data for this event.

Despite the buff to Rona’s fortified health, she still wasn’t viable enough to be present at the Championship.

No data for this event.

SAW was too slow to make it to the championship on time, or maybe he was too busy pushing lane, answering AMAs, and reviewing the latest update.

This baby dragon was plenty present at the Championship and came away with a roughly equal win loss rate.
Baron would be pleased seeing his sweetheart strike fear into her competitor’s hearts. He might be slightly less impressed by the fact that she lost a lot more than she actually lost most of the times she was played.
Taka was barely in the Championship, though he did lose only slightly more than he won.
Vox definitely showed a ton of dominance in the Championship, as well as some interesting versatility with the playing of Roam Vox.

You can read all our coverage of the NA championship series here: